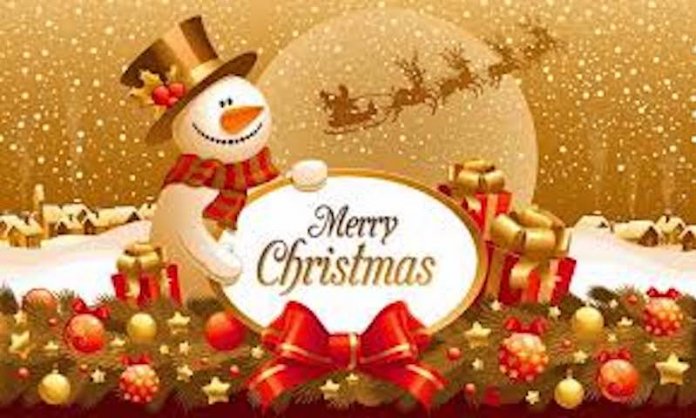 Chiedu Okoye urges all to celebrate Christmas with caution

Is Christmas not the most celebrated and popular religious festival in our today’s world? Christmas ranks higher than other religious festivals in popularity because Christians and non-Christians alike celebrate the Christmas festival. From New Delhi, India to Jakarta, Indonesia; and from Nairobi, Kenya to Melbourne, Australia, people from different races who profess religious faiths other than Christianity celebrate Christmas. And for many years, the peoples of the world have been celebrating Christmas, joyously.

But what is Christmas? Simply put, it is the commemoration and remembrance of the birthday of Jesus Christ, who is the only begotten Son of God. He paid the ransom for our sins by accepting to die on the cross for us. He is our redeemer and Messiah. So, those who exercise faith in Him will have eternal life.

Concerning His birth, we have different harmonious narrative accounts recorded in the synoptic gospel of the Bible. His nativity story has it that he was born of Immaculate Conception to parents, who belonged to lowly stations in life. Mary, the mother of Jesus, was betrothed to Joseph, a carpenter. Both had not been sexually involved with each other when Joseph discovered that she was pregnant with a baby. So, he was contemplating putting her away when an angel of the Lord advised him against taking that course of action, telling him the reasons. He heeded the angel’s piece of advice.

During His stay on earth, Jesus propagated and spread the message of love. Love was the doctrinal base of His teachings, although He dwelt on such religious issues as forgiveness, repentance, paradise, and others. His revolutionary teachings, which his people deemed capable of upturning their ways of life, contributed majorly to His crucifixion on the cross. By His death on the cross, He paid the ransom for our sins. Now, whosoever believes in His name and obeys His command shall not perish but have eternal life.

Being a great religious personage and prophet, His birthday deserves remembering and commemorating. His phenomenal deeds, which are recorded in the new testament of the Bible, bear him out as a great religious teacher, prophet, and miracle worker. He’s a demi-god, who’s partly human and partly divine. He brought dead people back to life, converted water into wine, and calmed tempestuous sea. And his radical and revolutionary teachings have greatly influenced our way of life.

So, over the centuries, since his death on the cross, the peoples of the world have been celebrating his birthday. However, some Christian sects such as the Seventh Day Adventist Church and the Jehovah Witnesses do not commemorate his birthday on the grounds that Jesus Christ didn’t instruct us to celebrate his birthday. And, other people who do not mark Christ’s birthday aver that it was improbable that Jesus Christ was born on December 25 based on the narrative accounts of His birth, which are recorded in the Bible.

More so, legends and other lores have it that Saturnalia, a pagan festival, was Christianized into Christmas. Whether or not Jesus Christ’s exact birthday was December 25 is immaterial to us now as every December 25 is set aside for the celebration of His birthday.

Now, another Christmas is around the corner. We know that we have entered the Yuletide season when the deciduous trees start shedding their leaves. Then, our lips will become chapped. And houses near the roads will be coated with dust, which is ochre in colour, and which is the earth’s colour. When we start feeling a chill in the air, it is the unmistakable sign of the coming of Christmas.

As the Christmas day approaches, people get into a frenzy of preparation for the festival. They will buy new clothes and pairs of shoes for their children and relations. Others will have their houses dabbed with a coat of paint so as to beautify them. And people with the financial wherewithal may buy cars during the period for the celebration of Christmas.

That is how we celebrate Christmas in this part of the world. Besides the fact that it is the world’s remembrance of the birth of Christ, it is the time for mass home-coming of a people to their natal homes. Again, during the period, couples do solemnize their marital unions in churches. And, in many towns, chieftaincy titles will be bestowed and conferred on high-flying individuals, who have reached the acme in their careers and endeavours.

But sadly, the true meaning of Christmas as well as the reason for celebrating it is lost on many Christians in the Christendom. Do they know that Jesus Christ for whom they are commemorating Christmas stands for love? Instead of demonstrating acts of charity through their deeds during the Christmas period, many rich people engage in ostentatious and flamboyant display of their wealth. And during the period, young people do engage in illicit sexual concupiscence with the consequences of some school girls having unintended pregnancies. Again, during past yuletide seasons, many young people had died in unavoidable car accidents, which were caused by their drunk- driving.

As we celebrate the birthday of Jesus Christ, who is our redeemer, we should reflect on his deeds and teachings. If we abide by Jesus Christ’s commands, which are captured vividly in the synoptic gospel of the Bible, we will be able to tame and rein in our proclivities for doing evil deeds. A world that is filled by people who are Christ-like in their natures will be an oasis of peace and unity.

It is an indisputable fact that the year 2020 is an annus horribilis. It has spun Covid-19 pandemic and #endsars bloody protests, causing loss of lives and limbs, and hurting our mono-economy severely. So do we have cause to celebrate 2020 Christmas by throwing bacchanalian parties and spending money extravagantly instead of engaging in sober reflection and helping the dirt-poor?