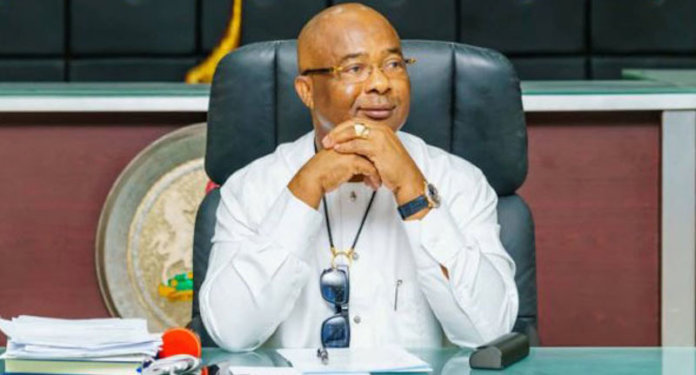 Governor Hope Uzodinma is gradually becoming a legendary character in Imo State. A charismatic and unforgettable individual for sure, Uzodinma is determined to break previous records in every possible way. This undertaking recently took a turn for the better and brought about an unintended consequence, and an unintended name—Governor Hope Uzodinma, the Rabbit Farmer.

Delivering on his promises to provide gainful employment for the youth of his state, Governor Hope Uzodinma recently launched an agricultural initiative that is expected to set the ball rolling for unemployed youths: the rearing of rabbits. If things turn out according to Uzodinma’s expectations, over 774,000 youths will be able to live fine, reduce the burden on the federal and state governments, and significantly contribute to the Nigerian economy.

Unveiling the programme through the Imo State arm of the National Agricultural Land Development Authority (NALDA) at Okigwe road Owerri, Governor Uzodinma revealed that the initiative has been approved by the Federal Government and the Executive Secretary of NALDA. Furthermore, Uzodinma revealed that this is the second phase of the programme, with Imo State as the testing ground for its success.

Many researchers and advocates of rapid Nigerian economic growth maintain that the agricultural sector is the way to get there. Thus, Uzodinma’s gig has won the approval of many. Of course, this has not relieved the Governor from inadvertently securing the nickname, ‘Rabbit Farmer’ or making a good-natured joke of the whole programme. All things considered, this is a good development, especially for someone who has been struggling to unite all of Imo State under his banner and vision.

It has to be said that Uzodinma has not had it easy since climbing into the Owerri power chair. From harassing his convoy with local pistols and machetes to being openly opposed by several political characters, the man has had it rough in the last 10 or 11 months. But things have been really good for some time now.
With the latest nickname, at least, even the meanest, most average Imo State native/resident can identify with Governor Uzodinma.