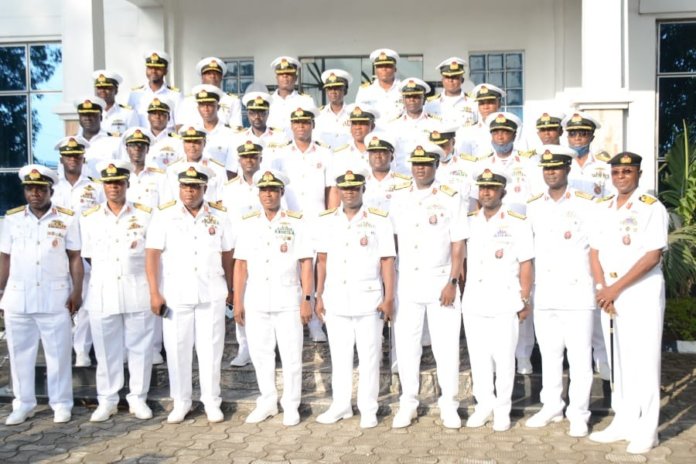 According to the Command Information Officer, Western Naval Command, Commander Thomas Otuji, shipping of stripes is an age-long naval tradition that is dedicated to the Royal Navy and has now been adopted in most navies of the world. In the early days of the navy, he said it was the core practice of the officers to wear stripe on the curve of their uniforms jackets.

“Upon promotion, a new stripe will be added to the curve. The new clean stripe will also stand out from the older more whether stripe. The wedding of the the stripe was often an attempt to get the new stripe to match the older stripe so that the promotion will not look recent.

“Today, an officer will usually replace all stripes upon each promotion with an attempt to maintain a more professional uniform appearance. The NN like other navies of the world still maintains and cherishes this unique tradition.”

Acknowledging that promotion comes from God, Daji however noted that the officers’ diligence and exemplary qualities also played a role in their elevation.

He urged them to remain loyal to the navy, dedicated to duty and ensure that they leave impressive footprints in their places of deployment.

“Going through your list in the promotion signal, it was evident that your hardwork and dedication played a major role in your elevation. So you must redouble your effort to justify the confidence reposed in you by the NN and distinguish yourselves in all subsequent courses and appointments.

“You must develop yourselves academically and professionally as well as exhibit the highest standards of discipline in order to make it to the pinnacle of your career.

“To whom much is given, much is expected. So, the service would expect loyalty, total commitment and diligence in the discharge of your responsibilities. Nothing short of these will be acceptable.

“You must be guided by the core values of the NN which are integrity, professionalism and team work and must exhibit the highest standards of accountability and make judicious use of all resources entrusted in your care.

“You must not be routine officers but leave legacies anywhere you find yourself as this is what will speak for you years after. This is the surest way through which we can take ownership of the resources and move the NN forward.

“Your promotion also comes with financial benefit, so we expect that this should reflect in the upkeep of your respective families. So the spouse of the promoted officers should please note. Let them perform rather than give you excuses,” he said.

The vote of thanks was given on behalf of other promoted officers by Commodore Adamu Yahaya, who expressed appreciation to the Chief of Naval Staff (CNS), Vice Admiral Ibok-Ete Ibas for the promotion.