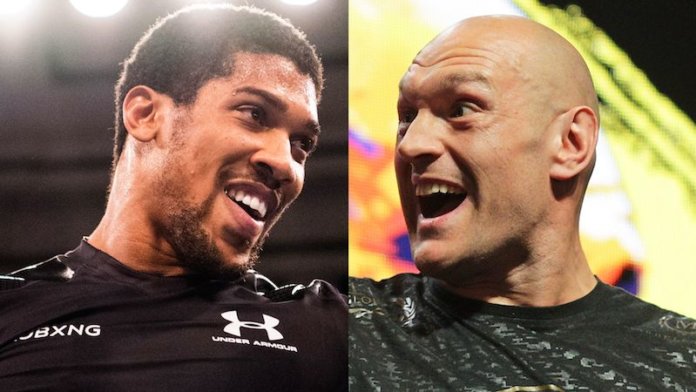 After defeating Bulgarian Kubrat Pulev at the weekend, talks for the unification bout between Anthony Joshua and Tyson Fury expected to hold next year, are to begin today.

Joshua who holds three out of the four major world heavyweight titles including the International Boxing Federation (IBF), World Boxing Association (WBA) and the World Boxing Organisation (WBO), knocked out Pulev in the ninth round of their clash on Saturday night to pave way for the potential unification of the category.

Another British boxer, Tyson Fury holds the World Boxing Council (WBC) heavyweight title and has been dreaming of fighting AJ to become the undisputed champion of the category.

But barely 24 hours after Joshua removed the obstacle posed by Pulev, Manager of his Promotion outfit, Eddie Hearn announced that talks will begin on Monday (today) on the unification bout that will be the first time in history for all four heavyweight titles to be on the line.

“There is no reason we cannot complete the deal and then move on and solve the other problems,” Hearn said.

WBC world heavyweight champion Fury has been installed as an odds-on favourite to beat IBF, WBA and WBO belt holder Joshua if they fight next.

Asked how long realistically it would take to complete the deal, Hearn replied: “A couple of days.

“We need to write to the governing bodies and say yes we have a deal and we will now talk to the various sites and confirm the dates shortly for what I suppose will be the end of May.”

“I want the fight next. I can’t wait to knock him out,” Fury said in a video posted on social media on Saturday night to diminish AJ’s victory over Pulev.

There are some potential issues, including if Fury is forced to fight Deontay Wilder for a third time, while Joshua could be told by the WBO to face mandatory challenger Oleksandr Usyk.

But Matchroom Promoter Hearn added: “The only hitch I can think of is Wilder. If the court orders the Fury rematch, and it doesn’t sound as though they will, then it is out of our hands.

“That is the only way it falls through is if something stops their side, that isn’t me saying they don’t want it, they do, but if the court orders it then we will have to fight Usyk.”

If Usyk and the WBO do not agree to that title being on the line for Joshua-Fury, Hearn said they could vacate the belt in order to ensure one of the biggest fights in British boxing history is able to take place.

Meanwhile, the Minister of Youth and Sports Development, Sunday Dare, has congratulated Joshua on his victory over Pulev.

According to a statement from the Ministry,” We team up with other Nigerians to salute Anthony Joshua on his victory over Pulev. The courage, tenacity and die-hard spirit you displayed against Puyev is an attestation of your hardwork, commitment and discipline which have kept you at the top.

“Once again, you not only made us proud, but proved to the world that you are the best in the heavyweight class.

“We urge you not to relent in sustaining your pole position in world boxing. Keep soaring. We are indeed very proud of you. We encourage you to maintain the tempo so that you can remain at the top,” concludes the statement.