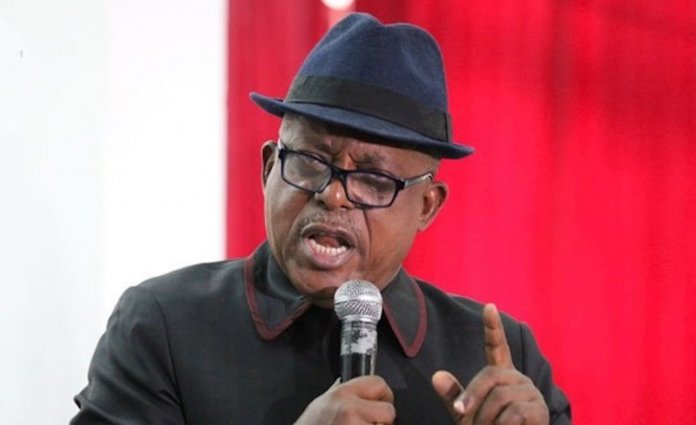 The National Chairman of PDP, Uche Secondus, has been the only chairman of the party to mark three years in office since 1998, when the party was formed. From Solomon Lar, Audu Ogbeh, Barnabas Gemade, Ahmadu Ali, Bamanga Tukur, Adamu Muazu, all spent less than two years in office. In this interview with Chuks Okocha, Secondus handed his three years scoreboard. Excerpts:

What did your NWC meet on assumption of office?

It has been 36 months of ups and downs and I am proud to report that the party is not at the level where we met it. We took over the party when it was still trying to come out of the trauma of losing election and being in opposition for two years under an intolerant ruling party, the APC.

We met a psychologically traumatised party struggling to adjust to opposing life after 16 years in power. We inherited party that had issues with internal democracy. Delegates were not having the final say on who flies the flag of the party in an election. Names of winners were randomly and blatantly changed in Abuja with disregard to the people and the requirements of our constitution.

What mandate was given to your NWC on assumption of office?

The delegates of our party across the country had given us the mandate to lead believing in our rebranding campaign message of 3Rs: Reposition, Rebuild to Regain, which were designed to recreate and rebrand the party. We quickly hit the ground running in our reform policy. We organised a rebranding conference and embarked on extensive consultations across the country. Our sensitisation programme took us to rallies in all the geo-political zones.

By the time our reform programme came on stream, the party had become an attractive brand to accommodate the influx of new members that included the entire leadership of the two chambers of the National Assembly, then, the Senate President and the Speaker of the House of Representatives, others members of the parliament at federal and state levels as well as three incumbent governors of Benue, Kwara and Sokoto, who joined us.

How has your NWC been able to enthrone internal democracy?

As we approached the general election of 2019, our party was already the party to beat. The internal democracy promised in our reform package was already in place. Powers were effectively decentralised to flow from the people. Party tickets were gotten at the congress venue not at party headquarters at state and National levels.

Popular and more acceptable candidates emerged at state congresses and National Convention. Our National Convention in Port Harcourt, Rivers State in October 2018, became the first of its kind in Nigeria. It was so transparent that there was no complaint from anybody. Instead, all the contestants resolved to support the winner. All these helped to engender confidence and trust in our leadership

What would you identify as the achievements of your NWC?

PDP under my leadership had through its reform packages significantly enhanced the image and status of the party. All over the country, the party remains the bride. States under the party’s control rose from 11 to 16 and it could have been more if not for the shameless ambush of the APC in Osun, Kano, Kogi and Imo States.

Internally, the party has also used its in-house means to resolve issues making PDP the right party to belong in this country today. Nothing supports this assertion more than that after five and a half years, the ruling APC instead of trying to put their tattered house in order is busy begging and coercing our members to join them with fake and unrealistic promises.

At the risk of being seen as blowing our own trumpet, it’s necessary to note that this NWC is the first in transparency and accountability, the first to function effectively for three years without any scandal or dent of corruption. The first, also to successfully render account of its monetary expenditures to both NEC of our party and to INEC as statutorily required of us to do.

What would you say of your governors’ performance?

Another thing that helped us as a party while in this opposition is the exceptional performance of PDP governors. Throughout all the PDP controlled states is glaring evidence of delivery of democracy dividend. This has helped to engender confidence on the party about democracy. APC’s performance in the area of delivering democracy benefits at federal and state levels has been awful and demoralising. As a party, we are proud of the performances of our Governors and Nigerians are also happy with them.

What do you think of 2023 and the general state of the nation?

I know you the media are interested in zoning, but our party has a clear method of doing things. After the general election, we set up a panel to study and appraise our performance and make necessary recommendations. The governor of Bauchi State, His Excellency, Alhaji Bala Mohammed, is heading the committee and they are still working.

We did the same thing when we lost election in 2015, when we set up the Senator Ike Ekweremadu committee to look into why we lost. It was from that report that the party took action towards 2019. The same way, this time, we must study our last outing before looking ahead. We can’t be talking of zoning, when we have not appraised how we faired in the last election.

Moreover, the state of the nation today is such that politics or anything concerning 2023 of three years away should take back stage. Nigeria is in a comatose state today, where APC brought it. That should be our concern now.

What is PDP’s take on President Muhammadu Buhari’s refusal to address the House of Representatives?

President Muhammadu Buhari, who was scheduled to address the nation’s parliament today backed out after confirming to them he was coming. This back and forth from the President on vital issue as security that is overwhelming our nation underscores our position as an opposition party that nobody is in charge and that this is a broken government.

The truth, which is worrisome is that the President either does not know what is happening or does know what to do otherwise he should not be afraid to face the people.

The hard fact facing all of us now is that this regime has woefully failed Nigerians in all ramifications. It’s a shame that a government that came to power brandishing its military credential as a General with the propaganda to wipe away Boko Haram in 100 days is there five years plus presiding over the worst security situation in our history with no clear direction what to do and even afraid to face the country’s the parliament to explain what he is doing.

In my statement to the media last May in the assessment of the five years of APC’s administration, I said APC is a road Nigeria should not have followed. Everything on ground in our country today from insecurity to the recessed economy etc points to the fact that Nigeria entered the wrong bus in 2015 and they are paying for it, because wrong vehicle cannot take you to your correct destination.

What in your view is the way forward?

Even in a situation of hopelessness as APC has dragged the country, there is still a window for children of God. Nigerians should not despair. There is a light being sighted at the end of the tunnel. This light is in the resourcefulness and resilience of our youths. The well laid out programme of youth development by the PDP will ensure that the future of this country is handed over to those it rightly belongs to – the Nigerian youths. We have watched the hopelessness of Nigerian youths under APC administration, because its cabinet is made of largely the out-going generation, who think less of the future, because it does not belong to them.