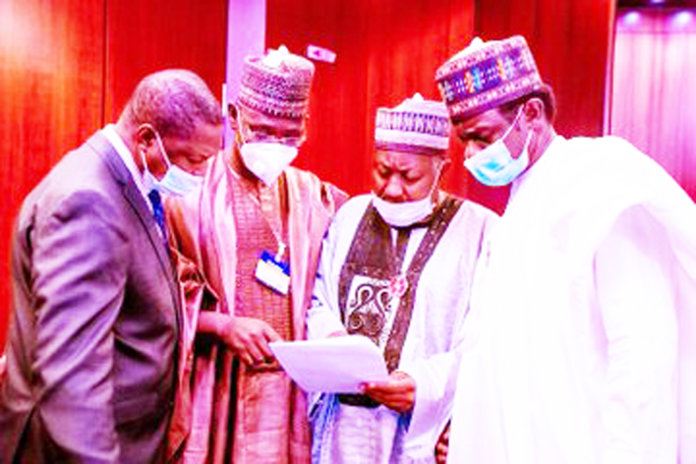 The recent dissolution of states’ executive structures of the APC seemed like a hijack of the party structures, and an indication that the battle for the 2023 elections would be stormy. Chuks Okocha writes

It was a prophecy foretold. There is no way a new wine could fit into an old bottle. This is the story of the All Progressives Congress (APC) registration of new members, which consequently led to the dissolution of all wards, local governments, zonal and states’ executive committees, last week.

The dissolved executive committees had their allegiance to the sacked National Chairman, Adams Oshiomhole and his dissolved National Working Committee (NWC). To that extent, the former governor of Lagos State, Bola Tinubu, who goes with the title ‘national leader’, but not a member of the National Executive Committee (NEC), where high-wire politics is played and decisions taken.

Therefore, to dissolve the former executive committees was to sweep off the remaining part of the old structure. This will enable the enthroning of a new order.

APC is an association of some legacy political parties, including the Action Congress of Nigeria (ACN), the Congress of Progressive Change (CPC) and the All Nigeria Peoples Party (ANPP). However, in the ensuing political power struggle, the CPC seemed to have outsmarted other members of the legacy parties.

There is also, the New PDP members in the APC led by Abubakar Baraje, who is considered a protégée of former Senate President Abubakar Bukola Saraki, with the former Speaker of the House of Representatives and Governor of Sokoto State, Aminu Waziri Tambawul and of course, a former governor of Rivers State, Chibuike Amaechi, who is the current Minister of Transportation.

All his colleagues that defected from the PDP to the APC in 2014 have all gone back to the PDP, leaving behind Amaechi. But the nPDP is not as potent as it was in 2014 as it has been consumed by the CPC moving train.

The emergency NEC meeting was so planned to exclude the national caucus of the party. For sometimes now, APC has no Body of Trustee (BoT). Caucus is the conscience of the party in the absence of a BoT and those in the plot knew that elders and leaders of conscience in the party would advise appropriately against the dissolution of the party’s structures nationwide. They knew Tinubu and the likes of Akande were members of cau­cus, so they hurriedly call it for emergency NEC meeting.

The dissolved states executive committees were the last vestiges of the ACN as the CPC, which consists of the President, the Chairman of the Caretaker Committee, who incidentally is the Governor of Yobe State, Mai Mala Buni and Attorney General of Nigeria, Abubakar Malami, were the original members of the CPC.

The Oshiomhole camp, which has Bola Tinubu as the leader is part of the ACN that has been dismantled. As things are today with the dissolution of organs of the APC at the state, zonal and national levels, President Buhari and governors of the party have tightened their hold on the party.

The direct implication of this is that the reconstitution of the party structures would give the president and the governors leverage in deciding how the party’s candidates could emerge ahead of the 2023 general election as they would ensure that only people, whose loyalty they could count on, emerge as party leaders from ward to national levels.

Also, it points to the fact that the struggle about who becomes the presidential candidate of the APC would be determined by the President and the governors, who tilt towards the CPC as the new controlling power base. Though the position of five governors of the APC with allegiance to the ACN in the Southwest is not known but they are somewhat divided in their support to the presidential aspiration of Bola Tinubu.

This is because the Ekiti State Governor, Kayode Fayemi, who is the chairman of Nigeria Governors’ Forum, is said to be nursing a presidential ambition, ditto former governor of Lagos State, Babatunde Fashola, who is the Minister of Works.

All these point out to a stormy struggle for the 2023 presidential ticket of the party and leave those with perceived presidential ambition in dilemma.

President Buhari, who also is anticipating a strong and stormy presidential battle, has sued for unity, despite the fact that he is busy amassing powers to control the APC to his political group, the CPC

He canvassed the need for the party members to rekindle the spirit that led to the success of mergers of 2014, which eventually culminated in the party’s victory at the polls by respecting resolutions of the party. According to him, there were mutual respect and trust among members at the time, pleading with members to rekindle such spirit and make sacrifices aimed at rebuilding the party.

But Senator Rochas Okorocha, a former governor of Imo State, with deep presidential ambition has warned of what could become of the party towards 2023.

“That trust and respect is what we still call APC. Outside that respect for President Buhari and the trust and belief that he could wake up one day and correct all these injustices and make it fine, nothing is happening.”

But there is every indication that there would be crisis soon in the APC, because of the way things are schemed in the party, leaving the CPC as dominant.

Prominent members have also cried out against these scheming in respect for mutual agreement reached during the era of the formation of the APC. It was re-echoed by two ministers in the persons of Babatunde Fashola and Chibuike Amaechi.

Fashola, who gave an encrypted message, said the APC must respect the zoning agreement at the formation of the party for the 2023 elections. Fashola’s outburst was to the claim that APC members were plotting to thwart the arrangement for power shift between North and South, intending to retain the presidency in the North on the expiration of President Buhari’s second term.

“The truth is that what makes an agreement spectacular is the honour in which it is made not whether it is written. If it was written there would be no court cases of breach of contract, because it is a document that is written and signed. But the private agreement you make with your brother and sister should not be breached; it must be honoured,” he added.

Repeating the same need to respect a gentleman’s agreement, Amaechi said the APC must respect the zoning agreement reached by the founding fathers of the party for the 2023 presidential ticket of the party. He agreed with the submission of his counterpart in the Works Ministry.

In a long essay titled, “Formation of the APC and the dangers of doing to Amaechi what the PDP did and regretted”, he traced how Amaechi sacrificed for APC as a once beautiful pride, who was wooed by the party.

He said Amaechi pursued Buhari’s emergence as APC presidential candidate with evangelical zeal, after the New PDP joined the party, stating, “This obsession explains why Amaechi did all within his power to ensure that Buhari emerged as the flag-bearer of APC during the Lagos Convention and, as the Director-General of the Buhari Campaign Organisation, worked even harder to ensure that Buhari emerged victorious during the March 28, 2015 presidential election.”