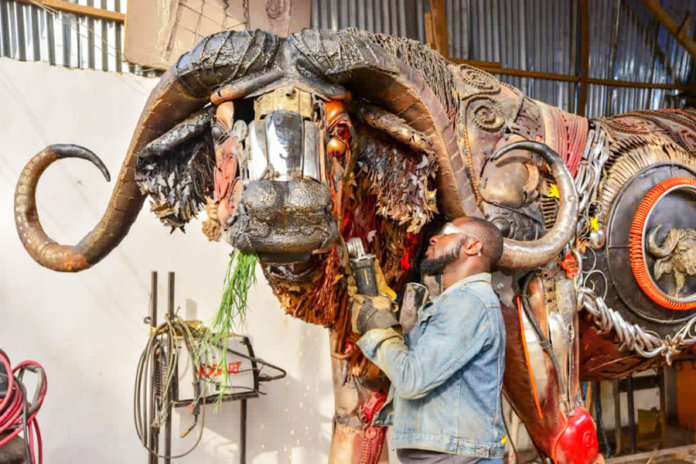 Metal-sculptor Dotun Popoola, known for his successful career in turning metal scraps into priceless sculptures, is set to regale aficionados with 13 works in his long-anticipated solo outing. Okechukwu Uwaezuoke writes

“Against all odds,” should be Dotun Popoola’s Metala’s real mantra. Conceived about a year ago, this solo exhibition, which opens on Saturday, December 19, was originally intended to hold sometime in April this year. An unforeseen lull in cultural activities – caused by the imposition of the COVID-19 safety protocols – would later force its organisers to look towards Saturday, November 7 as a possible new opening date. But then, the eruption of the nationwide anti-police brutality – better known as #EndSARS – protests took the wind out of their sails.

Thus, the “odds”, which loomed over the exhibition of metal sculptures, cast a pall of uncertainty over it. Understandably, Popoola grew increasingly despondent and frustrated with each postponement. He was teetering on the edge of giving up on the show before he was put back on track by the curator, Art Pantheon Limited’s Nana Sonoiki, who sternly reproved him and reminded him of the postponement of several high-profile international events during the year.

“It has been a very interesting journey working with Dotun and every step with a peculiar energy released,” Sonoiki recalls. “The pandemic, as experienced generally by the art world, dealt [the exhibition] several blows, but this energy kept us going and we stand strong.”

On the energy she was alluding to, it was drawn – she believes – from some of proposed exhibition’s inspiring works. Among these works is a realistic depiction of the mythical Yoruba god of thunder and lightning, Sango – a. k. a. Jakuta – whose resilience and tenacity became legendary.

Somehow, the curious scripting of fate found a slot for Metala’s opening date on the day before the conclusion of Ajorin: Dancemetalphor, an ongoing group exhibition at the Thought Pyramid Art Centre in Ikoyi, Lagos, featuring the artist alongside four other metal-sculptors. The former, which runs until Wednesday, December 30, will be holding at The Grandeur, along Bosun Adekoya Street in the upscale Lagos neighbourhood of Victoria Island.

Talking about the solo exhibition’s title, while it subtly evokes the Obafemi Awolowo University Ile-Ife graduate’s medium of expression, it is actually an allusion to the 13 works viewers should expect to see, as hinted by the word Metala (the Yoruba word for 13). “Significantly, the synergy in rhythmic strength between pieces of welded objects and numerical expression makes Metala a rare exhibition in the genre of metal art,” Sonoiki enthuses. “This show promises to renew your energy and projects amazing possibilities in recycling scraps, what we call useless and not useful being transformed into priceless luxury art.”

Even as the build-up to the show careened from one disappointment to another, a cordial interaction developed between the artist and the curator, who constantly emphasised the need for the symbiosis. For this project, the curator, a stickler for high standards, counts on the support of a team of curatorial advisers – constituted by the renowned female artist Peju Alatishe, the art promoter Olasehinde Odimayo, the Ahmadu Bello University art lecturer Professor Jerry Buhari and the artist, Popoola.

Thus, the stage has been set for Popoola – celebrated in the local art circles as “a synergetic metal sculptor” – to initiate the Art Pantheon’s debut outing in the exhibition circuit. Besides organising art exhibitions, this collective of professional and creative minds, united in their passion for the contemporary African art, also delves into such endeavours as documenting private and corporate collections as well as appraising and valuating artworks.

As for the artist, who first graduated in 2004 from the Auchi Polytechnic in painting and general arts, he subsequently specialised in sculpture for his first degree and in painting for his second degree at the Obafemi Awolowo University, Ile-Ife. His deft transformation of metal scraps into delightful monumental hyperrealistic sculptures stands him out in the talent-glutted contemporary Nigerian art scene. Ditto his restless quest for new ideas as well as efforts at evolving a unique identity through the coalescing of previous diverse experiences.

A certified “hybrid metal-sculptor”, whose training saw him passing through several art studios, he was once a resident artist at John Lopez Studio in Lemmon, South Dakota, USA, where he developed passion for the art medium. It was Lopez, who nudged him on to further explore and develop his art.

Beneath Popoola’s apparent unruffled demeanour once surged a whirlpool of despair. From out of this, he rose to dispense hope and succour by giving himself in the service to humanity through his studio practice and community services. Egged on by his predilection for impacting on the lives of others, he easily doubles as a facilitator for art workshops, designed not only for students, but also for professionals, NGO’s, healthcare institutions, hospices, orphanage homes, rehabilitation centres in both local and international art scene.

Besides all that, the 2009 NYSC (National Youth Service Corps) Director General’s Award for the Best Artist winner had been featured in many high-profile exhibitions, which include ArtX Lagos and had recently represented Nigeria at the maiden scrap art exhibition in Qatar in 2019 and Global Art Festival in Gujarat, India this year.

Among his commissioned works are several monumental sculptures and large murals both in Nigeria and the USA. The 39-year-old, who has been featured in over 100 local and international publications positions himself, through his art, as a catalyst and a living protest against environmental decadence and infrastructural decay. Indeed, his studio practice has been all about repurposing, recycling and reusing tons of wastes that threaten to overwhelm the environment.

“His goal, then and now, is aimed at creating a luxury brand from discarded materials, and giving better values to dead and abandoned scraps,” corroborates Sonoiki, whose Art Pantheon needed no goading to sign him on for the forthcoming show, which is being sponsored and supported by The Grandeur Hotel, 7UP Bottling Company, Tiger Beer, Belvedere Vodka, The Luxury Reporter, TSA Contemporary Art Magazine, Faustino and George Osodi.