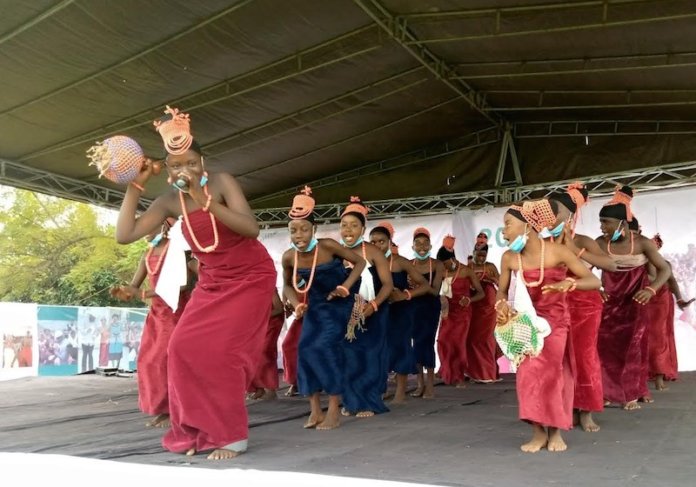 The National Assembly Committee on Culture and Tourism in collaboration with the National Institute for Culture and Orientation recently held a cultural orientation and sensitisation programme for junior secondary schools in Oredo Federal Constituency of Edo State. Adibe Emenyonu, who witnessed the event, captured the frills and thrills

Culture generally is about people’s way of life which includes their values, beliefs, customs, languages and traditions. It also reflects their history, heritage and how they express ideas and creativity.

People’s culture measure their quality of life, vitality and the health of their society. Through culture, indigenes of a place develop a sense of belonging, personal and cognitive growth and the ability to empathise and relate to each other. A strong and vibrant culture have direct benefits on the people which include health and wellness, self esteem, skills development, social capital and economic return.

Culture, experts also say, is not only an effective apparatus for human existence and achievements, but a vital force for accelerating human development especially when its untapped potentials are well harnessed.”

Over the years however, some of these values are gradually phasing out due to forces like colonialism, westernisation and erosion of cultural values such as religion, mode of dressing as well as influx of foreign languages.

To this end there is the general apprehension that if people’s culture is not maintained and inculcated in them, particularly the younger ones, a time will come when their identity, value system will be completely lost to foreign culture and influences.

It is on this note that Hon. Omoregie Ogbeide Ihama, member, representing Oredo Federal Constituency in the House of Representatives and the House Committee on Culture and Tourism in conjunction with the National Institute for Cultural Orientation (NICO), held four-day cultural orientation and Sensitisation Programme for junior secondary school students in Oredo federal constituency of Edo State.

The programme with the theme: “Cultural Consciousness and The Future of The Nigerian Student”, was aimed at awakening the value system on the participants.

The programme began in 2016 and this year’s outing was the fifth edition with two segments: competitive and non-competitive.

Commencement of non-competitive events was the showcase and rendition of the National Anthem in Bini language, roundtable discussions, fashion parade and culturally designer fabrics.

The competitive events was the presentation of traditional music and dance, traditional hairdo, poetic rendition on culture, traditional cuisine and cultural quiz among others.

Speaking at the event, Hon Ogbeide-Ihama described culture as a way of life, adding, “If we don’t imbibe culture in our students and our children from birth we are going to have fundamental issues.”

He said the main objective of the cultural orientation and sensitisation programme for junior secondary schools in his constituency was derived from the Bible in Proverbs 22:6 “Train a child the way he/she should go and when he/she grows they’ll never depart from it”.

According to him, ” what we are trying to achieve over the years is to be able to discover talents. You’ll not believe how amazing and how much talent we have in our children in Oredo.

“Today, there is hardly any student in public schools in Oredo Federal Constituency that cannot recite the national anthem and the pledge in Benin language. This we have done over the last five years.”

Culture, Ogbeide Ihama continued, “encompasses religion, food, what we wear, how we wear it, our language, marriage, music, what we believe in whether right or wrong, how we sit at the table, how we greet visitors.

“Culture is a strong part of people’s lives. It influences their views, their values, their humor, their hopes, their loyalties, and their worries and fears. So when you are working with people and building relationships with them, it helps to have some perspective and understanding of their culture”.

In his remarks, Ado Mohammed Yahuza, the Executive Secretary of the National Institute for Cultural Orientation, said: “Culture is the major make up of the content and character of man, irrespective of the level of education we might have attained.

He said the event serves as a medium for cultural revitalisation and reorientation for the young generation, adding “culture has been a vital force for accelerating human development especially when its untapped potential are well harnessed”.

At the end of the programme, Oba Ewuare Junior Grammar School came overall best in competitive events for the junior school; while Iyekogba Senior Secondary School emerged overall best for the senior school.

Speaking on behalf of participating students, Adesuwa Eghobamien, a form three student of Oba Ewuare Junior Secondary School, said she was excited with the programme as it has taught her the importance of culture, adding that it has also afforded her the opportunity to come together with others for the overall well-being of both individuals and communities.