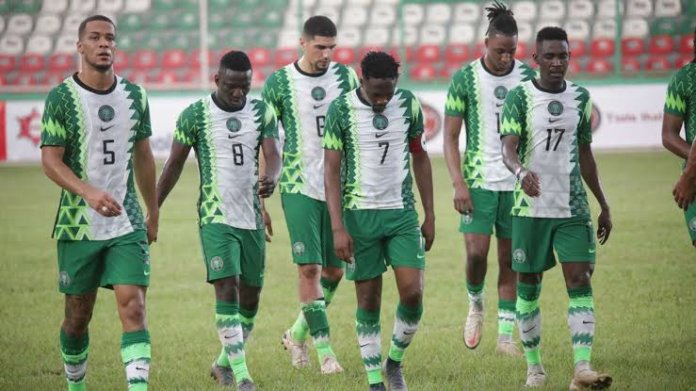 Eagles’ no movement in the current December ranking was due largely to the unimpressive draws over two legs against Sierra Leone last month in AFCON 2022 qualifying matches.Eagles are joint fourth with Morocco in the African standing.

The former African champions garnered same total of 1474 points with Morocco to stay as joint 35th globally and fourth in Africa with Morocco behind leaders Senegal, Tunisiaand Algeria.

Their first match of 2020 ended a 1-0 defeat by Algeria in an international friendly. This was followed up with a 1-1 draw against Tunisia in another international warm-up game staged at the Jacques Lemans Arena, Austria.

Nigeria’s back to back Africa Cup of Nations qualifier versus Sierra Leone ended 4-4 in Benin City and 0-0 in Freetown respectively.

Senegal are ranked first in the continent and 20th in the world with 1558 points, while the Carthage Eagles of Tunisia are 26th in the world and second in Africa after amassing 1503 points. Algeria are third with 1488 points.

Globally, Belgium claimed the team of the year for the third consecutive time having won six of their eight matches played in 2020.

Their three immediate chasers – France (2nd), Brazil (3rd) and England (4th) – retain their respective rankings. The only change in the top five compared to 2019 is the appearance of Cristiano Ronaldo’s Portugal in fifth place.

In eight matches played in 2020, the Magyars lost just once (to Russia), a sequence of results that enabled them to secure a berth at UEFA Euro 2020.

Burundi (138th), meanwhile, picked up 29 points and made the most significant move in terms of places, ascending 13 positions.

2022 FIFA World Cup hosts, Qatar boast of a striking 1391 points over the course of a year to finish fifth in Asian and 58th in the world.