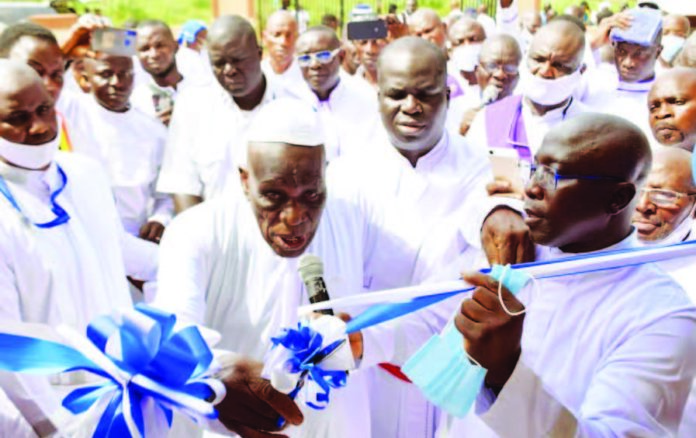 Efforts to tackle the challenges of offices and accommodation for members of the Cherubim & Seraphim Movement Church Worldwide (Ayo Ni O) at the Galilee Land Headquarters of the church, located at Orile-Igbon in Oyo State, especially during conferences and conventions, have received a boost.

The magnificent edifices were built and donated to the church by Senior Special Apostle Emmanuel Awode, a member of the church and the Chairman/Chief Executive Officer of Chemstar Group, manufacturers of Finecoat & Shield Paints, and other allied paints products.

The official dedication of the buildings was performed during the 80th International Conference of the Church at the Galilee Land, by the Spiritual Father and Chairman of the Church, His Grace, The Most Reverend Abidoye, as part of activities lined up for this year’s conference, held between Sunday, November 1 and November 8, 2020.

Apart from the church buildings, Awode also built and donated a modern Mosque to the Muslim community in Abuduka, the host community of the Galilee Land, Headquarters of the church.

Welcoming the church leaders and members, as well as other guests to the inauguration ceremony, the Victory District Secretary, Special Apostle Fasekomi, who glorified the Almighty God for the spiritual and infrastructural development of the Galilee Land, however, lauded the S/S/Ap Awode for his immense and untiring contribution to the growth of C&S Movement Church, as well as the expansion and progress of God’s work.

He, therefore, described the day as the day of joy, which the Lord has made for the entire C&S Movement Church, saying the District House and hostel would go a long way in addressing the problems of accommodation and office spaces confronting the District and the Church in particular.

While dedicating the building, Most Reverend Abidoye, who was full of praises to God Almighty, expressed gratitude to Awode for donating the buildings to the church for the progress of God’s work, saying: “We are grateful to S/S/Ap Awode for honouring his mother with this building and on behalf of the entire C&S Movement Church, I thank God for his life as he has continued to work hard not only to take the Church to greater heights, but to also propagate the work of God in all ramifications with his time and money.”

According to Awode, the hostel, which is well terraced, ventilated, equipped and furnished with modern facilities has a 250-bed spaces, while the Victory District House, has a five-bedroom apartment in the upper floor with executive beds, well-furnished living room for women, and the ground floor with offices and room facilities for men.

Meanwhile, in her remarks, S/M/I Prophetess Modupe Awode, thanked God for the favour granted her to be alive to witness the day, even as she lauded the leaders of the church, particularly Baba Aladura and Baba Alogbo, for standing by her since the demise of her husband, Special Apostle Dickson Adekunle Awode, former Chairman of District Victory, who died two years ago.

He thanked her son, Emmanuel, for honouring and naming the building after her, describing it as a surprise gift, as she was not in the know until the project was ready to be inaugurated.

Meanwhile, as the curtains were lowered on the 80th International Conference of the church, the Spiritual Father and Chairman of the Church, Most Reverend Abidoye, has lamented the current economic hardship and rising threat of insecurity in the country.

He, therefore, called on the government to swiftly act by freeing the citizenry from further suffering unleashed on the country by the harsh economic situation, saying: “Many Nigerians are silently languishing in poverty and their agitations for good living has not yielded any positive dividend from the government.”

He called on the government on the need for all tiers of government to pay more attention to the primary and secondary health care system, saying there is no doubt that there were several lessons to be learnt from the COVID-19 pandemic ravaging the country.