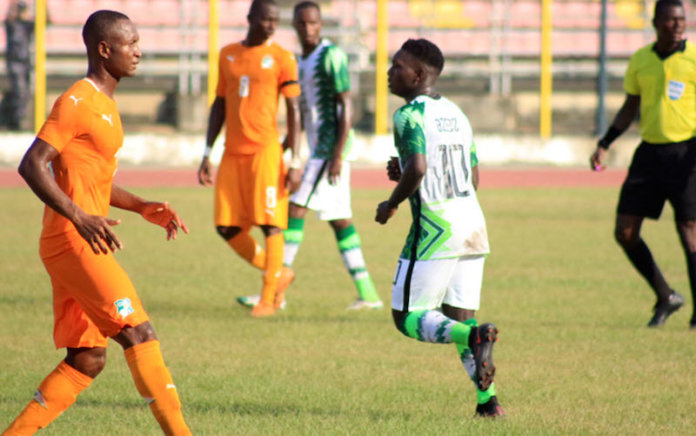 Defender Christopher Nwaeze was sent off as Cote d’Ivoire yesterday forced Nigeria to a 1-1 draw in the 2020 WAFU B U20 Cup of Nations Group B game at the Stade Charles de Gaulles. Ousmane Traore’s stoppage-time strike earned the Baby Elephants a share of the spoils in Port Novo, Benin Republic.

In a keenly contested game, the Flying Eagles put up a very determined performance despite the red card picked up by Nwaeze. Nwaeze’s goal appeared to have put Ladan Bosso side on course for an opening Group B win, but the Baby Elephants levelled late on.

Both sides created chances in an entertaining first half, with Peter Olawale and Nwaeze coming close for Nigeria. The contest continued was evenly balanced in the opening 45 minutes, although Nigeria was having more joy in cutting out Cote d’Ivoire attacks.

The curtain raiser eventually arrived on the hour mark. Crafty forward Wisdom Ubani sent an excellent delivery to the box and Nwaeze showed gratitude with a brilliant header beyond the keeper. The Flying Eagles were in complete control of the game until Nwaeze was sent to the showers for a second bookable offence on 71 minutes.

Despite playing with a man down, the determined Flying Eagles maintained their discipline and tactical awareness. But, in the first minute of added time, Traoré struck the equaliser and it ended 1-1 in Port Novo.

The Ladan Bosso wards showed great strength in the opening game and will be looking at positives ahead of the clash with Ghana.

The tournament in Benin Republic will serve as qualifiers for the 2021 Africa U20 Cup of Nations in Mauritania, which will, in turn, determine Africa’s representatives for the 2021 FIFA U20 World Cup in Indonesia.

The Flying Eagles who are in Group B will continue their campaign against Ghana’s Black Satellites on Wednesday at the Stade Charles de Gaulles in Porto Novo.