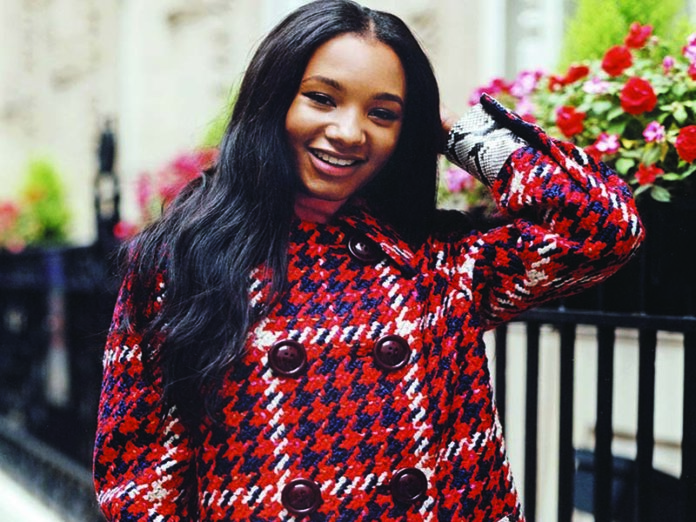 She’s a delight to behold. Bold, beautiful, and brilliant, soft-spoken and eloquent Temi Otedola is an adventurous Nigerian with a boisterous spirit. A renowned fashion blogger, Temi is gradually and if you may, effortlessly, making a name for herself in Nollywood. Her first shot at acting has received accolades and thunderous applause. To theatre enthusiasts, she is a breath of fresh air in the movie industry. As Temi charts a new path, Funke Olaode writes about what makes her tick

She is not new to the world by virtue of her birth. Her father, Femi Otedola is an accomplished businessman, a billionaire, and a philanthropist, whose name resonates beyond the shore of Nigeria. But if there is anything about the Lagos-born billionaire it’s his liberal attitude to his children’s career choice.

Suddenly, his household has turned into an abode of entertainment. His eldest daughter is a successful singer. DJ Cuppy has made Nigeria and Africa proud. No doubt, the Otedola girls have come of age. But in the midst of all of this, Temi Otedola holds her own. She is a fashion blogger who is currently charting a new path in Nollywood. Though a new kid on the block, her first shot in Kunle Afolayan’s movie ‘Citation’ has created a lot of frenzy among movie enthusiasts. Stylish and studious, the University of London graduate of History of Art has proved doubting Thomases wrong that even with accomplished parents one can be successful.

“Featuring in Kunle Afolayan’s movie is like a dream come through. Growing up I have always loved Nollywood, and Kunle Afolayan’s films have always been on the top of my list. So naturally, when I heard that the lead role in Citation matched my criteria as an actress, I got in touch and was put through months of auditions. It was an honour to work with the legendary director,” Temi said.
For a first-time actress, going through the audition rigours can be overwhelming but Temi was equal to every task and she did meet and exceed all expectations.

Speaking about her experience at the location, she said, “It was a little intimidating showing up to set as this was my first film. It could have been stressful, but we had a great cast and crew, and everyone made me feel really comfortable.
“I’m used to working long hours. Physical endurance wasn’t an issue for me. But the emotional endurance for the more intense scene was something to grapple with. For instance, when Prof. Lucien attempted to assault Moremi.”

Continuing, she disclosed, ”My dream has always been to act, so to have been received well for my debut or even considered a breath of fresh air in the industry is really humbling. I hope to become an integral part of this new wave of Nollywood actors rising up.”
Humble and willing to learn under the tutelage of veterans, you, you may wonder what was it like working with renowned actresses like Ini Edo, the industrialist, and boardroom guru, Ibukun Awosika just to mention a few can be intimidating but as a humble heart, Temi was proud and honoured to share the same stage with the established personalities.

“It was just such an honour,” said Temi.
“I was familiar with their work, so to get a chance to be around such renowned actors and to perform alongside them was fantastic. I look up to Mrs. Awosika as a leader in business and mentor so that was a particularly memorable part of being on set.”
As she progresses in her acting career she still looks up to female directors as Amma Asante, Kemi Adetiba and Ava Duvernay.

“I’m also inspired by Oprah Winfrey, Malala Yousafzai and of course, my parents.”
Temi is bilingual. Did you notice her language skill on set mixing French with English?
She explained, “Well, throughout my high school years I studied French. I’ve always had an interest in language or anything that can be a challenge”

No doubt, Temi is evolving, making the younger women who dare to dream and follow their passion proud. Temi’s father, Otedola is known to be a very liberal father who wouldn’t force a career on his children. But what was the initial reaction of her famous parents to her going into acting? Didn’t they perceive it as a misstep considering the fact that she is a greenhorn?
“I am blessed to have super supportive parents. They have always taught us to never be afraid of anything and just do it. My parents are truly my biggest fans. They are really proud of the movie,” said Temi.

Then how did she convince herself that, ‘hey this is the right path for me’?
“It took almost no thought at all. I tend to follow my intuition and always flow to what I think the next step is for me. At certain points in our life, we take leaps of faith. Once the journey started, I knew I had made the right decision.”

Then as an aspiring actress, what were the challenges while filming Citation and how did she surmount them?
“The subject matter of the movie is sensitive and as the ambassador of the Women’s Foundation, WARIF, it really resonated with me. I have been a loud voice against rape and sexual violence against women for a while, so this was the perfect first role for me. The challenge was to portray the authenticity of the situation and act as a vessel for all the girls and women who actually live through this. It took a lot of work, research, and rehearsal, but I’m really proud that Citation is a movie that has a strong social justice angle.”

Sexual harassment against women has generated a lot of reactions globally and with ‘Me too Movement’ a lot of mighty men have fallen. But with Citation, Temi believes it will help reduce if not totally eliminate it as it is now being discussed openly.
“Nigeria has a big sexual harassment and sexual violence issue, but thankfully people are beginning to talk about it more. Films like this provide a universal medium to openly talk about these problems. They don’t solve them, but they get people talking, and that’s how all change begins.”

Lending her voice on how the womenfolk can change the narrative, she said, “As I said previously, get the ball rolling. We can make these changes, but it is always helpful to have art such as this to promote those conversations and allow us to express ourselves in a safe space.”
She is following her passion, determined to make a success out of it. Although having accomplished parents sometimes can create burden of expectations. Does the name Otedola place too much pressure on her or gives her the confidence to be the best?

“Rather than feeling the pressure of being an Otedola, I feel inspired by my name,” she admitted.
“It gives me a sense of pride to follow in the footsteps of my successful parents. They have always been so supportive of me and my ambitions, and I hope to continue making them proud.”

Then what ideals does she cherish about her famous parents that she will like to replicate in her life?
“My parents are hard-working people and they instilled this into our family values from a young age. They give their 100 percent in whatever they are doing and I always strive to do the same. As the old adage says: “If you do anything, do it well or don’t do it at all.”

Young, dynamic and focused, if she were to look back in life, were there things she would have done differently?
“Yes, definitely,” she revealed.
“I would have started acting sooner. But I also believe that God’s timing is the best timing.”
Temi is daring as she constantly flaunts her private life particularly her love life on social media.
“I like sharing some aspects of my life with the millions of people that follow me on social media, although I primarily use these platforms to promote my creative work. The most honest and authentic you will find me publicly is in my new podcast with Mr. Eazi, ‘The How Far Podcast.’”

Her life has revolved around fashion blogging, but her passion has always been in the creative. As she opens a new vista in her career, she believes she is toeing the right path and things can only get better.

“Since I can remember I have always loved anything mentally creative. Whether it be art, fashion or writing. Creativity and expression are my passion and my purpose. It is even more rewarding when this can be shared with a wider audience.”

Her first shot at Nollywood has been a roller coaster. What does she think the future hold for her in the industry?
“A lot,” she simply said.
“Once I set my mind to something, you can’t stop me. I plan to challenge myself in every role I encounter and push the boundaries of my acting. All I can say for now is: watch this space.”