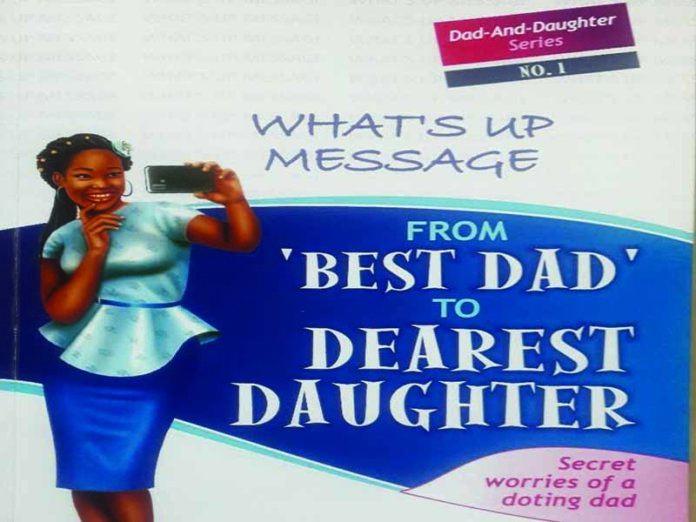 BOOKS
Yinka Olatunbosun
History has a stockpile of phenomenal female personalities, whose successful careers and enviable lifestyles had been largely influenced by their relationship with their fathers. This trail was followed in developing the plot of this instant-messaging-styled prose written by Chika Abanobi, an award-winning journalist with over three decades of active practice in print journalism. Titled, WHAT’S UP MESSAGE: From Best Dad to Dearest Daughter, the 118-page book has its foreword written by another seasoned journalist, Mike Awoyinfa.

Deeply emotive, the content is a reflection of the anxieties shared by fathers who desire to raise daughters who would inspire a generation of women. Educated fathers with intellectually-stimulating households want to contribute significantly to the society not just in terms of population through procreation but also through knowledge economy. Hence, Abanobi appropriates simple conversations in teaching values that are essential ingredients to raising a phenomenal daughter. One of his mechanisms is the use of good models drawn from politics and activism.

He cites the example of Hillary Clinton, US first female presidential candidate to be nominated by a major political party whose father taught the ideals of zero waste. Also, the award-winning writer, Chimamanda Adichie had developed interest in literature from her father’s literary collections. This habit would later morph into a pivotal role in her career choice as she made a dramatic detour from the study of medicine to pursue creative writing.

The author also draws upon the Nobel Prize laureate Malala Yousafzai’s experience as a child who regretted disappointing her father when she stole in retaliation for a bad deed by another. Vices such as stealing, lying, cheating and perpetuating violence are factors that swim against the tides of greatness for a true humanist. Abanobi also recountes, in the book, stories of other young female students who excelled at their higher institutions of learning by simply creating a study plan or habit that works only for them. Such ones are not distracted by frivolities or pseudo-friends who specialise in curating social activities that can waste time and intellectual energy.

No doubt, Abanobi tries to establish that there is something mystical in the bond between fathers and daughters. Hence, From the book celebrates the joy of fatherhood, paternal influence and the inexplicable bond occasioned by that closeness to a daughter.

While this book, the first in the series of volumes, is a huge influence in restating the home as the bedrock of the society, it may be indicting the trend of absentee fathers which could have resulted from voluntary single motherhood, divorce, separation or other circumstances as it excludes the strong bond that exists between the mother and the daughter. But if it is any consolation, the book offers a whole new perspective to the impact that a father figure has in creating a bold and successful woman out of a well-groomed childhood.