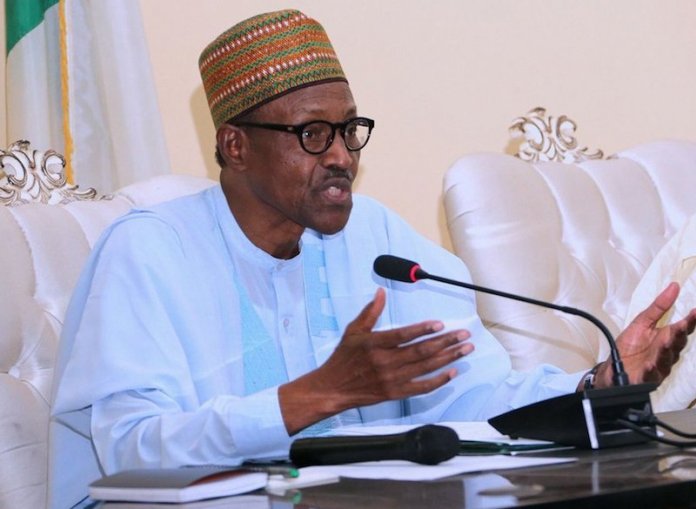 President Muhammadu Buhari yesterday urged the Organisation of Petroleum Exporting Countries (OPEC) to consider the burden of Nigeria with a large number of poor people when sharing oil production cuts.
He also described the decision of the African Petroleum Producers’ Organisation (APPO) to site the headquarters of the African Energy Investment Corporation in Abuja as a welcome development.
The president, while hosting the Secretary General of the APPO, Mr. Omar Farouk, a Nigerian, at the State House, Abuja, demanded a better deal from OPEC.

Buhari, in a statement by presidential spokesman, Malam Garba Shehu, also spoke on challenges confronting Nigeria with its large population and huge infrastructure deficit.
He urged the OPEC to put into consideration the burden of Nigeria with “200 million poor people with severe deficit in infrastructure when sharing oil production cuts.”
Nigeria had earlier called on OPEC to reconsider its production quotas under the crude output cut agreement reached by the cartel and its allies.

The federal government had submitted its request to OPEC for consideration ahead of full ministerial meetings scheduled for November 30 and December 1.
The country’s request was said to have been based on the classification of oil from the Chevron’s Agbami field, which produced around 140,000 barrels per day, as condensates

Meanwhile, Buhari also yesterday assured Farouk that Nigeria will pay for its share subscription in APPO.
The statement added that the president was praised over the vision to set up APPO and the ratification of its charter by Nigeria as far back as 1985 when he was a military head of state.

Buhari said peculiarities of the challenges confronting African oil producers, made their coming together compelling under the APPO umbrella to share experiences together and collectively solve their problems.
He said despite the growing clamour for a reduction in the use of fossil fuels, countries such as Nigeria need to produce more oil to feed the petro-chemical industry and create jobs.

“In his remarks, the Minister of State, Petroleum Resources, Timipre Sylva, informed the president that the proposed APPO Energy Investment Corporation to be sited in Abuja will start with $1 billion from the AFRO-EXIM Bank and is expected to bring employment and other benefits to Nigeria.

“The Secretary General of APPO who was accompanied by Dr. Adedapo Odulaji, the OPEC Governor in Nigeria, conveyed the appreciation of both the Congolese president and the prime minister for the president’s support in the relocation of the headquarters of the association to its chosen location, Brazzaville, the Congolese capital.

“He expressed hope that members of the 16-member organisation will surmount the challenges posed by COVID-19 as well as that from receding fossil fuel use as a result of the climate change treaties signed by member states and other nations,” the statement added.