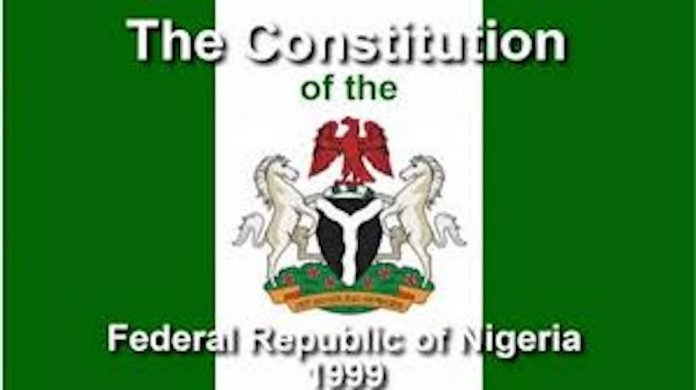 Short answer: none – beyond, that is, the fact that, some of their enabling statutes, in my view, are ultra vires the legislature which enacted them, namely the National Assembly – at least in terms of their geographical spread or scope. What do I mean? I will shortly explain. But, first, the mandatory background…

The Constitution
It is a constitutional truism that legislative power in a Federation is shared between the component federating units, i.e., the Federal, State and Local Governments, respectively. This is the same with Nigeria, under the 1999 Constitution – indeed, for the past 40-odd years (i.e., since the 1979 Constitution). The implication is that any legislature which purports to act outside the scope of its powers – as delimited in the 2nd and 4th Schedules to the Constitution – would have acted in vain, as the outcome would be ultra vires, invalid, null and void.

The Advance Fee Fraud Act 2006
Consisting of 22 Sections, this law broadly seeks to criminalise:
-Obtaining property by false pretences with a fraudulent intent (Sections 1 and 2);
-Printing, making and issuing any currency note (except the Central Bank of Nigeria) – Section 2(c);
-Knowingly permitting premises to be used to commit offences under the Act (Section 3);
-Inviting or inducing a person to visit Nigeria for a purpose connected with the commission of an offence under the Act (Section 4);
-Conducting or attempting to conduct a financial transaction involving the proceeds of unlawful activity either with the intention of promoting such activity or to conceal/disguise the nature, location, source, ownership or control of the proceeds of such activity (Section 7(i));
-Transporting or attempting to transport monetary instruments or funds to or from Nigeria either with intent to promote an unlawful activity as defined under the Act, or to conceal, disguise, etc., the ownership or control of the proceeds of such unlawful activity or to avoid a lawful transaction (Section 7(4)).

Others are:
-(Owners of electronic communication service or remote computing service) who fail to obtain from their customers the latters’ names and addresses; as well as (those customers) who fail to provide or who provide false information or conceal/disguise the information required (Section 12);
-Failure by internal or telephone service providers (cafes) to register with the Economic & Financial Crimes Commission (EFCC) or furnish the Commission with returns on the use of his service or facilities or to facilitate access to data/information by employees of the Commission with intent to conceal or disguise the nature of his activities/use of his services or facilities (Section 13).

Analysis
I believe that, of the foregoing operative provisions of the AFF Act, the main clause therein, i.e. Section 1, is – paradoxically – inapplicable or unenforceable outside the Federal Capital Territory, Abuja. The reason is simply the constitutional fact that, beyond Abuja, the National Assembly lacks the requisite vires to enact those provisions. The Assembly’s power to legislate for Abuja is provided for by Section 299 of the Constitution, while that of State Houses of Assembly is contained in Section 4(7) of the Constitution.

In this regard, virtually every State in the Federation has a law, in more or less the same terms as those of Section 1 of the AFF Act (identical provisions in the Criminal Code gave rise to the eponymous ‘419’, i.e., the offence of obtaining by false pretences). Suffice it to say that, the National Assembly does not have the capacity to enact a general criminal law applicable across the country – unless, of course, to the extent to which it is specifically empowered under the Constitution: DOHERTY v BALEWA (1961) 2 NSCC 248 @ 252; BODE GEORGE v FRN.

The status of this law came to the fore, by the conviction, last week, of a serving Deputy Director of the Federal Character Commission, Alhaji Ahmad Balarabe, by the High Court of Zamfara State, for obtaining the sum of N7million by false pretences, contrary to Section 1(1)(a) of the Act. He was sentenced to 14 years imprisonment. However, beyond the foregoing, another anomaly in the AFF Act, in my view, is the duplication of the provisions of Section 2(c) thereof, in Section 20(4) of the Central Bank of Nigeria Act, 2007.

Both sets of provisions penalise any person (other than the CBN, of course) who prints, makes or issues any currency note or coin which is legal tender in Nigeria. The punishments for their contravention, however, vary: whilst the AFFA prescribes imprisonment for between 5 and 15 years, the CBN Act, simply says that it shall be “not less than 5 years”. The latter is applicable, however, by virtue of the strict interpretation required of penal provisions. See OHUKA v THE STATE (1988) 2 S.C. pt. II, PG. 139.

Counsel’s Fees
Another contemporary anomaly in our laws, in my view, is the on-going regulation by the National Assembly of the fees which counsel may charge for their services. This is codified in Section 15 of the Legal Practitioners Act, Cap. L.11, LFN 2004, which provides, inter alia, thus: “There shall be a committee, to be called the Legal Practitioners Remuneration Committee, which shall have power to make orders regulating generally the charges of legal practitioners (including):
“a. the maximum charges which may be made in respect of any transaction or activity of a description specified in the order;

“b. The ascertainment of the charges appropriate for any transaction or activity by reference to such considerations as may be specified;
“c. The taking by practitioners of security for the payment of their charges and the allowance of interest with respect to the security; and
“d. agreements between practitioners and clients with respect to charges.”
In addition to these provisions Sections 16, 17 & 18 of the Act (called “the remuneration provisions” in Section 19 of the Act), contain other provisions which impinge on counsel’s fees and lay out the modalities for their recovery. The Act defines “charges” as “any charges (whether by way of fees, disbursements, expenses or otherwise) in respect of anything done by a legal practitioner, in his capacity as a legal practitioner”.

Are these Provisions Valid?
This is the million Naira (albeit, controversial) question. It is prompted by my belief that, notwithstanding the undoubted constitutional capacity of the National Assembly to regulate professional occupations generally (including, of course, the legal profession – vide Item 49 of the Exclusive Legislative List of the Constitution), however, other provisions of the self-same Constitution limit the scope of that power. In other words, it is not a carte blanche or an open cheque.

In this regard, I believe that the obvious intent and purpose of the said remuneration provisions of the LPA (to control fees charged by counsel) places them squarely within the purview of Item 62(e) of the Exclusive Legislative List of the Constitution, which limit the exercise of such power by the National Assembly to only “essential goods and commodities” as designated by the Assembly. To the best of my knowledge, counsel’s fees have not been designated as “essential” by the National Assembly. Needless to say, by virtue of the expressio unius est exclusio alterius rule of interpretation, the prices (or the cost) of legal services are, therefore, excluded from the constitutional power of the National Assembly to control prices.

It follows that the provisions of Section 15, et. seq., of the LPA are ultra vires the National Assembly invalid, null and void. I dare say that the provisions of Item 68 of the Exclusive Legislative List of the Constitution (“the ancillary or incidental powers” clause) do not make a difference to this view, as they only come into play where there is no contrary provision limiting the express powers of the Assembly which they might have accentuated. If such a provision exists – as I believe, it does in the form of Item 62(e) – the ancillary/supplemental powers conferred by Item 68 will give way, as the tail cannot wag the dog.

Beyond the foregoing, however, I believe that another reason why the National Assembly is incompetent to regulate the fees chargeable by counsel, is the fact that such a power is an incident of trade and commerce, which is outside the scope of the authority donated by the Constitution to the Assembly vide the self-same Item 62 of the Exclusive Legislative List thereof. I will explain. In ABERUAGBA v ATT-GEN. OF OGUN STATE (1985) 1 NWLR pt. 3 pg. 395, the Supreme Court held that the trade and commerce power of the National Assembly is limited to the sub-items of Item 61 of the 1979 Constitution – which are exactly the same as those of Item 62 of the 1999 Constitution. Counsel’s fees are not included therein.

Conclusion
Much work needs to be done, to ‘clean’ our aforesaid laws. The existing anomalies therein simply give cause for concern. With specific regard to the AFF Act, I believe that – short of duplicating the provisions of existing Federal statutes which contain specific provisions which the National Assembly is undoubtedly empowered to make – the entire Act ought to be scrapped, that is, in terms of their enforcement in the 36 States. It is only applicable in its entirety, in Abuja.