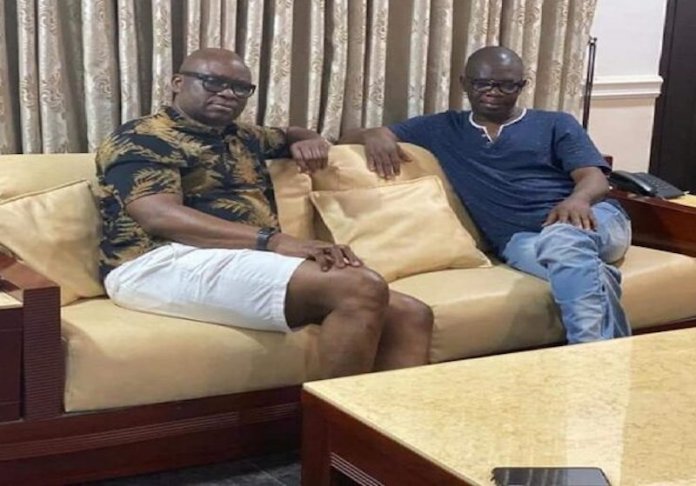 This was contained in a statement by Fayose’s Media Aide, Lere Olayinka in which he quoted Ajayi as commending Fayose for his credible leadership in the Southwest and the country as a whole.

Ajayi had been moving in and out of different political parties in the last six months. On June 21, the deputy governor defected to the PDP due to irreconcilable differences with his principal, Mr. Rotimi Akeredolu.

After failing to clinch the PDP governorship ticket in the state, the deputy governor again abandoned the PDP for the Zenith Labour Party on August 14 in his bid to actualise his governorship aspiration.

In the October 10 governorship election, Ajayi came far behind Akeredolu, the candidate of All Progressives Congress and Mr. Eyitayo Jegede, the PDP candidate in the contest.
But in his statement yesterday, the deputy governor described Fayose as a clear minded personality, who would say his mind not minding whose ox is gored.

Ajayi, as contained in Olayinka’s statement, said: “I have come to Afao Ekiti at this hour of the day to wish a friend, brother and leader a happy birthday at 60.
“Fayose is one person I have great respect for and I will continue to relate with him because he is not someone who will not tell you A when he means B. His yes is yes and when he says no, he means no,” Ajayi said.

Responding to Ajayi’s goodwill message, Fayose observed that it was important for the deputy governor “to put the past behind; return to PDP and join hands with other leaders in the state to rebuild the party.”

Fayose said there was no denying the fact that Ajayi is a force to be reckoned with in the politics of Ondo State, adding that the deputy governor would thrive better politically in a mainstream and liberal political party like the PDP.

The former governor said: “What I can tell you like a brother is that the past should be put behind you and the future should be focused on realistically.
“The best option before you now is to return to the PDP and I am encouraging you to give it a consideration because you need the party and the party too needs a strong political character like you,” Fayose said.