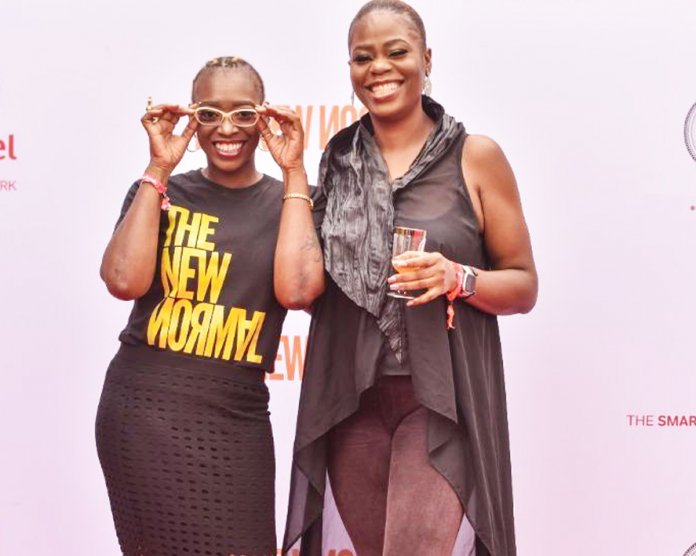 Months after making waves at international film events and bagging awards including the Best International Narrative at the annual American Black Film Festival (ABFF) Jury Awards, and the award for Best African Female Filmmaker at the Toronto International Nollywood Film Festival (TINFF), Teniola Olatoni’s movie, ‘The New Normal’ was brought home last Sunday at the beautifully decorated The Lux @ Adam and Eve in GRA Ikeja. The dramedy opened in 54 cinemas across the nation yesterday.

Preceded with red carpet entreaties, guests were treated to a cocktail reception prior to the movie screening. It was a moderate gathering, elegant, fun and beautiful as guests had time to mingle. Media personality, Denrele Edun, made louder the red carpet which was graced by some members of the cast like Kehinde Bankole, Enado Odigie, Olumide Oworu, Zara Udofia Ejoh, Rita Edwards, alongside prominent celebrities such Ireti Doyle, Diana Yekini, Ade Laoye, David Wilson, Seye Makinde, Charles O’Tudor amongst other industry practitioners and invitees.

While a lot of talk leading to the premiere had been themed around the fact that the movie has won prestigious awards and graced prominent international film festivals despite not being officially released, the film has also generated a lot of positive buzz due to its strong, compelling story. As the movie screened to the moderately packed audience, there was no mistake that the 2:18 mins feature film was an instant hit among the moderately packed audience.

‘The New Normal’ revolves around the lives of four couples and a single friend as they navigate individual and collective issues of discrimination, nepotism, misogyny, infertility, addiction, and mental health, while trying their best to keep up appearances and escape society’s suffocating boots with their often hilarious and always surprising results, thus finding their way to a whole New Normal. The movie highlights the need to keep real identity, the quest to self-discovery in relationships, marriages, careers and lifestyle.

Many called The New Normal a break from the norm and a perfect movie for the times we are in. One cannot agree less, seeing the movie explore various themes seamlessly with quite relatable storylines and sub-plots. Talk about its characterisation, setting, props and costume. Teniola Olatoni, the CEO and Creative Head at Sourmash Stories Production and her team got it right in its directorial debut and with a sterling cast of Richard Mofe-Damijo, Mercy Johnson-Okojie, Bimbo Akintola, Enado Odigie, Adunni Ade, Meg Otanwa, Mofe Duncan, and Bikiya Graham-Douglas, Femi Jacobs, and Yemi Blaq who brought their A games on board.

Same for Sani Mu’azu, Kehinde Bankole, Kenneth Okolie, and Broda Shaggi (Pastor Enoch) in a cameo appearance of the most hilarious form as the clergyman who attempted to deliver “gender fluidity” Temi, played by Olumide Oworu. It wouldn’t be out of place if he goes by a new moniker pastor Shaggi. On its dialogue, the viewers will have a lot to laugh at, especially when words made popular by the recent pandemic assumed different connotation. Like in a scene where Femi Jacobs (Banji), who newly walked down the aisle with Enado Odigie (Nike), uses the expression “am on lockdown o!”

The audience couldn’t help but laugh as he hints his close pal Yemi Blaq (Michael) about his wife’s libidinous drive at home, such that he cannot afford a side chic in addition to that. Or is it the sweltering exchange between RMD (Mr. Chairman) and Mercy Johnson (Jade, the single mother). And so many other lines in the movie that caused the audience hysteria.

Speaking about the movie shortly after the curtain call, quite enthusiastic Teniola Olatoni who had a stint in film school in 2018, said she had always wanted to do movie as international student in London: “I have always wanted every now and then for over the past twenty years that I would like to make films, to act. So I would stay awake, hold my eyes open, catch the Oscars when I should be studying.” Now she did twenty years after, and a great one, adding “Today is the beginning of getting where I want to go to.”

The New Normal was written by Tunde Babalola. “So far the movie has made waves internationally before coming home.

Now coming home, we are hoping to replicate that and do even more because it is our story. And we are Nollywood. So this is our home base,” said Olatoni.