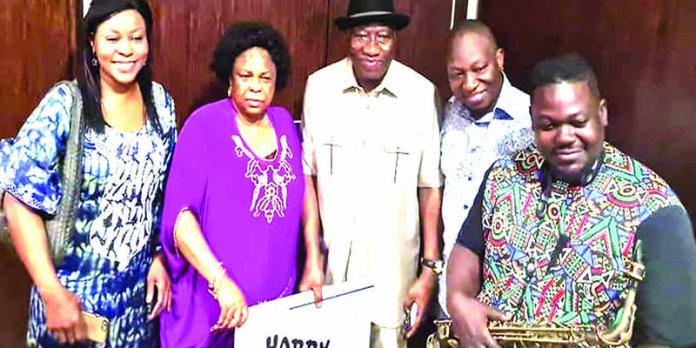 •PDP missing, pressure on former president to run on APC ticket in 2023 continues

Apparently in continuation of pressure on former president Goodluck Jonathan to run for president in 2023 on the platform of the All Progressives Congress (APC), some governors of the party yesterday stormed the Abuja home of Jonathan to felicitate with him on his 63rd birthday anniversary.

The move to have Jonathan run in 2023 on the platform of the APC is no longer a secret.
The thinking is that it will satisfy the increasing clamour for power shift to the South.
Buhari’s close loyalists believe that Jonathan would be harmless to their group interest and as such the right person to take over if power were to shift to the South.

“He handed over power peacefully and nursed no bitterness against anyone and therefore will not be a threat to the interest of the north,” said a source in Buhari’s camp who didn’t want to be identified.

The attraction to Jonathan’s possible candidacy from Buhari’s camp is that he will serve just one term of four years.
A growing number of influential northern leaders of thought are favourably disposed to the idea of Jonathan’s second coming.

Meanwhile, as family members and friends gathered to celebrate the former President on his 63rd birthday yesterday, the Northern Governors Forum and the Peoples Democratic Party (PDP) have eulogised him as a true democrat whose impact has transcended the shore of Nigeria.

In a congratulatory message, the Chairman of the Northern Governors Forum, who is also the Plateau State Governor, Simon Lalong said the former President has continued to serve the country with zeal and commitment.

He said, “President Jonathan is a true democrat whose passion for the growth of democracy is reflected not only in his records while in office, but of his current engagements where he has travelled round the world to monitor elections and also engage with stakeholders.”
The governors also saluted the former President’s patriotism and dedication to the unity, peace and development of Nigeria, as well as offering counsel on various issues.

In the same vein, the PDP yesterday saluted the former President, describing him as an exceptional democrat, whose commitment to the unity, stability and development of our nation remains unparalleled.

The party described him as a detribalised Nigerian, an undiminished icon of democracy and global figure, who has amply demonstrated that the essence of leadership, at all levels is in the humility of applying its values and opportunities for the collective good rather than for self.

In a statement issued by the National Publicity Secretary of the PDP, Kola Ologbondiyan, “Nigerians will remain eternally grateful to former President Jonathan for his personal sacrifices towards the unity and stability of our dear nation to ensure the corporate existence of our country during one of her very trying moments.

“This is in addition to his efforts in entrenching democratic tenets of rule of law, respect for constitutionally guaranteed rights and personal liberty of citizens, as well as strengthening our electoral system and institutions of government for national growth and stability,” he said.

Moreover, the PDP said that the former President Jonathan is celebrated for his giant strides in repositioning the nation’s economy to become one of the fastest growing in the world, through meticulous application of robust economic policies in key sectors, which stabilised the currency, enhanced transparency in governance, boost the productivity of Nigerians in every sector of national and international endeavors and granted the nation a strong voice among the comity of nations.

Besides, the PDP said that “the life style of former President Jonathan is one which teaches the immeasurable values of humility, patience, faith and loyalty. From him flows a lesson for leaders to remain steadfast to their calling and avoid desperate quest for political power at all cost.”

In its tribute, the Minority Caucus in the House of Representatives described Jonathan as outstanding statesman and quintessential democrat.
The caucus in a statement signed by its leader, Hon. Ndudi Elumelu said Jonathan is an extraordinary leader, a shining example of a detribalised Nigerian, whose sense of honesty, humility, selflessness, love for all Nigerians, as well as commitment and personal sacrifices for the unity and stability of the nation saved her corporate existence and laid the solid foundation for the national unanimity the nation enjoys today.

The caucus said, ”Over the years, as the deputy governor and later governor of Bayelsa State; Vice President and subsequently the President of our dear country, and now a global statesman, Dr. Jonathan has continued to exhibit uncommon leadership virtues in seeking only the good of our nation and humanity at large.”

Former aviation minister, Femi Fani-Kayode in his goodwill message to Jonathan, described him as a a kind, gentle and compassionate man.
Fani-Kayode said: “For the last four years I have been with President Jonathan on his birthday. Unfortunately this year I could not make it because I am touring the South-east and South-south for a series of crucial political meetings but we spoke on the phone during the party and I am delighted that no less than four APC governors and my good friend the APC chieftain Kashim Ibrahim Imam honored this great man with their presence.

“This says a lot for the APC and it confirms the fact that we can play politics without bitterness in this county. I wish some PDP governors had been there too because many of them love him too. President Jonathan is by far the most humble, civilised and humane person in Nigerian politics today. A great leader and a kind, gentle and compassionate man; he is our leader and wherever he goes is where we will go. May God bless and keep him for many more years.” 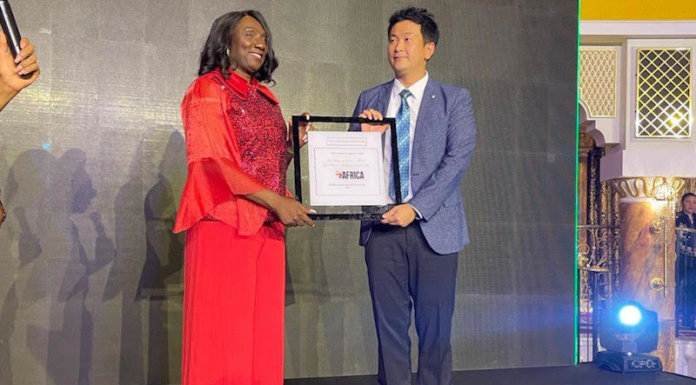