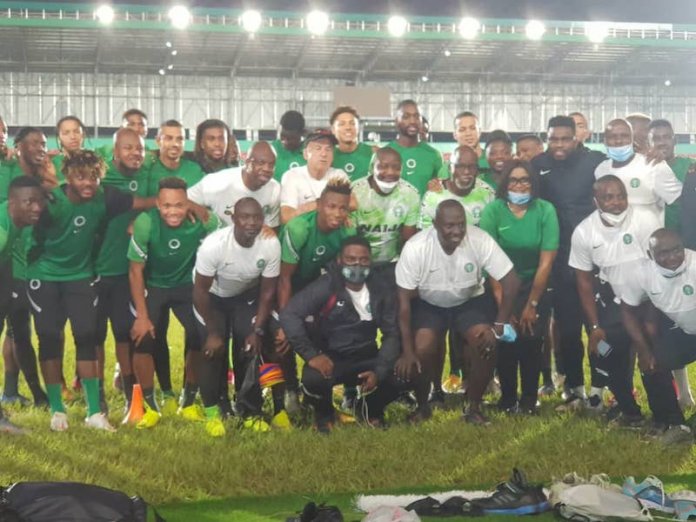 Super Eagles will be aiming to sustain the trend of Nigeria qualifying for Africa Cup of Nations with some matches to spare when the three-time continental champions file out against the Leone Stars of Sierra Leone this evening at the Samuel Ogbemudia Stadium in Benin City.

When Franco-German Coach Gernot Rohr took charge of the team in 2016, Nigeria was just coming out of frosty relationships with coaches who were unable to build on the 2013 victory in South Africa with late Stephen Keshi in charge.

Twice Nigeria failed to make the cut for the 2015 and 2017 editions. Of course, Nigeria fumbled out of the race for the 2017 edition before Rohr came in 2016 when the qualifiers were over. He has nonetheless succeeded in created a myth around the Eagles even as so many of our compatriots appear not comfortable with the playing pattern of the team under his watch yet.

Just like it happened in 2019 qualifiers when Nigeria booked her place in the finals in Egypt with a game to spare, the same scenario appears playing out again as Eagles are heading into the double header with the Leone Stars with the prospect of winning the ticket with two matches outstanding.

A win here in Benin City this evening for Nigeria already on six points from two matches and a repeat performance in Freetown on Tuesday will leave Eagles as the unassailable leaders of Group L on maximum 12 points.

Nigeria defeated Benin Republic 2-1 in Uyo before thumping Lesotho 4-2 in Maseru last November, with Victor Osimhen playing a part in all four goals for Rohr’s men.

Osimhen will be one of many attacking weapons at Rohr’s disposal with Samuel Chukwueze, Kelechi Iheanacho, Paul Onuachu, Emmanuel Dennis, Alex Iwobi and Ahmed Musa all in the Squad to line up against the visitors from Freetown.

Despite the enthusiasm in the Nigerian camp following the All-clear-no-Covid-19 result in all the 23 players tested, the Franco-German has remained cautious, preferring not to underestimate he Leone Stars.

“We are expecting a tough match because our opponent, Sierra Leone, have quality players too. It will not be an easy game because they have professional players,” Rohr insisted at the pre-match virtual press briefing yesterday.

“My work is to first explain to the players that this will not be an easy game. We cannot underrate this Sierra Leone team,” he warned further.

Sierra Leone sit bottom of the group after two rounds of fixtures having followed 1-1 draw at home to Lesotho with 1-0 defeat away to Benin Republican Match-day 2 in their most recent outing.

Coach John Keister and his crew will be boosted by the presence of defender Umaru Bangura who is currently the most capped player in his team. Bangura is strutting his stuff for FC Zurich in Switzerland.

Similarly, he also have veteran forward Kei Kamara who expressed his delight at being involved with the Leone Stars once again.

“A year ago I made the decision to step away from our national team, and it was a decision I made with good intentions.” Kamara said in a statement. “During this year of being on the outside watching and listening, I can tell you it has not been easy.

“In the past few months I have heard some wonderful conversations with newly appointed head coach John Keister about his vision for the national team, and they’re remarkable.

“I’m very honoured to be considered by Coach Keister as someone that could impact the team. To be included on the roster for the upcoming games is an invitation I have accepted.

“I’m very excited to wave the green, white and blue flag and will proudly represent my country. I’ll do what I have always done – play my heart out for Mama Sierra Leone. I look forward to joining the team in the quest for qualification.”

This will be the first meeting between the two nations since 2008 when the Super Eagles claimed a 4-1 win in a 2010 FIFA World Cup qualifier hosted in Abuja, with goals from Christian Obodo, Victor Obinna, Osaze Odemwingie and Chukwudi Odiah sealing victory for the host.