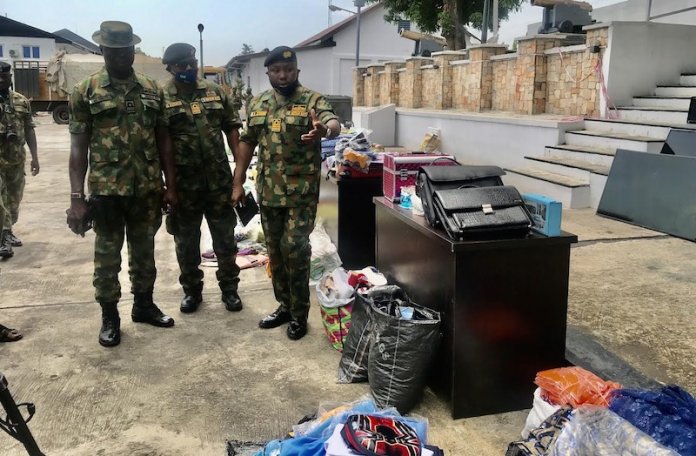 In a sting operation that has brought some measure of relief to business owners whose shops and offices were looted by vandals in the aftermath of the #EndSARS protest in Lagos, Chiemelie Ezeobi reports that the operatives of the Nigerian Navy Ship BEECROFT recently arrested 41 suspects and recovered goods worth over N100million

In the aftermath of the #EndSARS protest, aside the loss of lives, those that bore the brunt of the widespread violence and vandalism were business owners across Lagos. From Lagos Island to the Mainland, the devastation was gripping.

The looters hijacked the peaceful protest and unleashed mayhem on businesses across the state- from stalls to malls, warehouses and even government establishments. The worst hit were SMEs, some who took out loans to stock their shops.

Although some are still counting their losses, there was some measure of relief recently after the operatives of the Nigerian Navy Ship (NNS) BEECROFT carried out a sting operation and recovered some of the stolen goods said to be worth over N100million. They also arrested 41 suspects.

After the looting, the operatives kicked off a sting operation across Surulere, Apapa, Ijora and environs where malls, private shops and houses were vandalised.

According to the Commander NNS BEECROFT, Commodore Ibrahim Shettima, the over 200 active patrols soon paid off with the massive recovery across the aforementioned suburbs.

Shettima who was represented by the base’s acting Executive Officer (XO), Commander Andrew Zidon, added that they also responded to over 50 distress calls as the state plunged into civil unrest characterised by riots, looting and reported widespread criminal activities by hoodlums.

He noted that the operation was conducted under the Lagos State Security architecture code named OP MESA which designates, Apapa, Orile, Ijora, Costain, Surulere, Mile 12, Amukoko etc as the Area of Responsibility (AOR) for the Nigerian Navy.

Arrests
At the end of the operation, 41 suspects were rounded up including those that were out of state-bound in a truck fully laden with stolen goods. However, minors were released to their parents after screening.

Shettima said: “These suspects here are those we have degree of certainty on their involvement in the crimes. Among the 41 suspects arrested, some were 11, 12 or 13-year-olds and so, not people we felt we should keep in custody. We invited their parents and handed them over to them.

“Suspects were arrested from various locations. The truck was intercepted under the bridge at Orile and the driver arrested. He said the truck was going outside Lagos. Through the driver, we have gotten other suspects.”

He also added that they have done serialisation of every item recovered and some of the owners have already identified what belongs to them.

One of the proactive measures taken by the navy was to safeguard critical national assets. Thus, they deployed personnel to Tin-Can Island Port and Apapa Wharf, all NNPC installations at Tarkwa Bay Island including Terminals/Tanks Farms and the Atlas Cove Jetty.

Also, Harbour Patrols were conducted around the Ports and Lagos Anchorage to prevent miscreants from attacking visiting merchant vessels.

Meanwhile, when NNS BEECROFT were alerted about the attack at NPA headquarters, they stormed there and with the help of security on ground, evacuated some staff, some of who required medical attention, just as some hoodlums were arrested.

The base also deployed personnel to Ijora Police Station as the station was under attack by armed miscreants. They succeeded in dispersing them and secured the station.

Additionally, the Lagos State DNA and forensic center was ransacked by some miscreants before they were dispersed by personnel, who also arrested six suspects.

Through the association of shop owners, some of the victims were contacted and after inventory was taken, pointed out some of their goods among the recovered loots.

An employee of STI Textiles, Seun Olubode, who said their shops at Suruelere and Lekki were looted, thanked the navy for helping them get some of the items.

Another victim, Abubakar Mohammed, who also thanked the navy, said his spare part shop was looted twice with goods worth over N17million carted away. He was thankfully able to identify most of his goods in the booty.

Also, the Lagos State government, through the Ministry of Agriculture, commended the navy in a letter signed by the Permanent Secretary, J.O. Olakulehin, for the recovery of some CACOVID palliatives, which was looted from the warehouse at Monkey Village in Mazamaza.