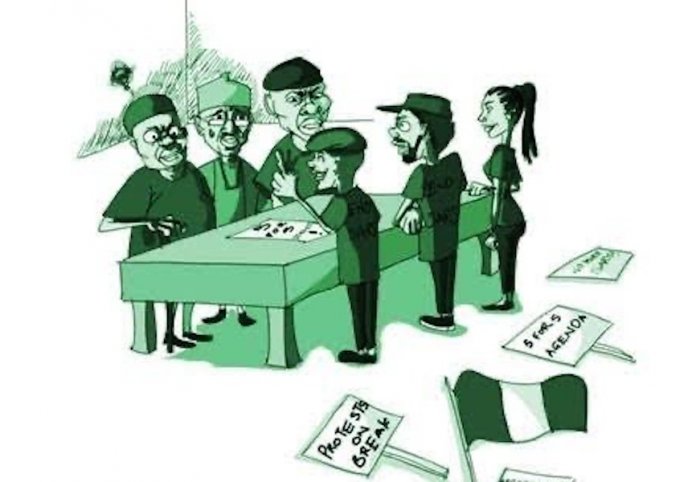 Today we awake to a Nigeria we are sad about. A Nigeria with many deep-seated undertones oxygenated by grave mistrusts – the government thinks protesters have been infiltrated by people with anti-nationalistic agendas, the protesters also think the government isn’t credible. As the heated rhetoric and knee-jerk reactions between opposing sides grow louder, often the response from us seeking peace is, “If only we could just sit down and talk.”

The chaos that is gradually unfolding could have been avoidable if only constructive thinking was swiftly recognized and co-opted into a protest that has largely been driven by emotional stirrings. We cannot deny the fact that emotions play a key role in sustaining agitations however, emotional stirs at best can only buy sympathizers. The protest is in desperate need of a strategy that can bring tangible results with little or no fuss.

History never lies, it readily screams “I told you so” if you ignore its most valuable lesson. The Arab spring is a classic case study of how not to protest. Yes, protesters consumed by a fit of understandable anger against governmental policies got what they wanted (Regime Change) but did not really get what they thought they would (Peace and prosperity). Their voices were heard no doubt but these voices metamorphosed into war cries because protests were not intelligently driven.

In the last two weeks, #SoroSoke had brought the government to its knees. Everything that was demanded was given. I mean everything! This has remained unprecedented in our nation’s history. There is no gainsaying that #SoroSoke is welcomed and applaudable, but relying on it alone as the exclusive methodology of bringing about positive change will end in disappointment. In fact, staying in #SoroSoke is the fastest way to end any hope of change. Soonest and regrettable so, if #SoroSoke does not transit to #SoroLoriTable, the voices raised will quickly become an excruciating noise that offers some sought of legitimacy to shut it up.

Whilst we will never forget how #SoroSoke was used to illuminate our frustrations in a way that provided the needed voice, dignity, and attention to the marginalized populations, I think It is time to transit to #SoroLoriTable. It is time to leave the streets and SIT. This protest cannot rely on making constructive change by placards alone, there is an urgent need to actualize demands by negotiation (#SoroLoriTable).

The people must understand that the lasting solution to ills bedeviling this nation can only come via a process of dialogue. The two parties, in this case, young people and the government of the day must demonstrate in word and deed a preparedness to “calm down” and really pay attention to the concerns of each other, work together in a positive way to reach a constructive solution to the problem.

Once voices have been heard, the transition period must be a collective decision-making process in which the protesters are effectively represented (This can only happen at #SoroLoriTable). That being said, this takes us back to the lack of leadership in the movement. Indeed, the #EndSARS protest is in desperate need of a politically non-aligned leadership structure that will initiate the #SoroLoriTable process.

Of course, not all youths can sit on the table, but persons generally perceived as influential representatives of protest clusters can lead the SOLORITABLE process. Do their best to give a good account of the interest and concerns of protesters while maintaining all forms of loyalty to the Nigerian dream.

A situation too far from the state, I fear, may heighten an already volatile situation, create further misunderstanding, brew bad blood, pitch the government against its people, protesters against protesters, and citizens against citizens. Here, the ethical, cultural, and religious realities of our nation will not do us much good.

I think the youths should talk but this time not on the streets anymore but on a table.

Shall we begin to #SoroLoriTable?

… Oduyemi is of SAME GROUNDS, a movement that advocates that young people should organise more intelligently.