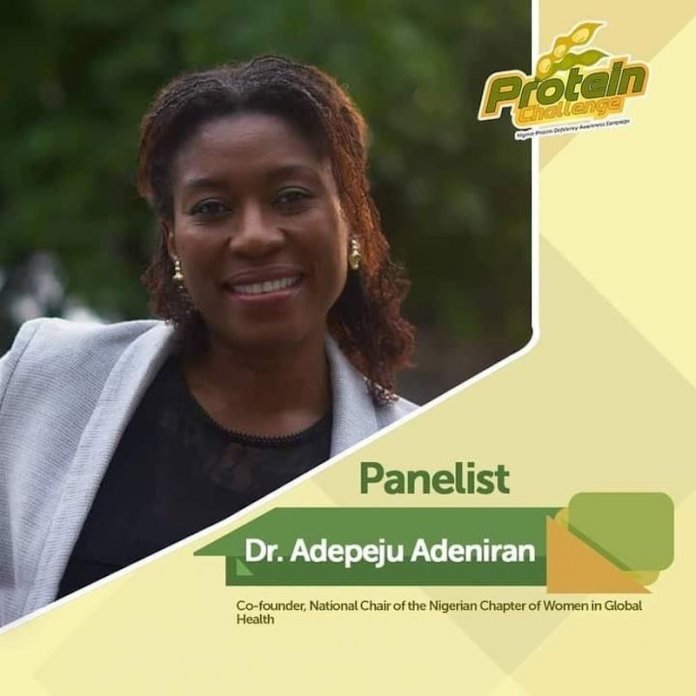 The federal government has been tasked to urgently develop and implement a national protein-led nutrition policy to address and curtail the rising incidence of protein deficiency in Nigeria.

Adeniran, who is also the co-founder and national chairperson of the Nigerian chapter of Women in Global Health, tasked the government to prioritise the availability and affordability of protein-rich foods in the country.

Speaking on the nutritional requirements of the average individual, she stated that carbohydrates, proteins, healthy oils and minerals all have their place in healthy diet compositions, but proteins are nearly always neglected.

The public health expert explained that the need for a national protein nutrition policy arises from the urgent desire to target measured problems like household food security, child undernutrition, maternal and child health, infectious disease prevention, amongst other national indicators.

According to Dr Adeniran, “a nutritional policy could target the public’s access to information about a nutrition-related health condition. For example, the United States public-private collaboration campaign to influence the increase in public dairy consumption tagged, “got milk?” Nutrition policies have also targeted fortification of foods with minerals to increase the public’s consumption of such nutrients through eating foods rich in them. Many examples of these exist in global health.

She stated, “In Vietnam, iron-deficiency anaemia was targeted by delivering iron supplements especially to women of childbearing age as a response to national surveys which identified anaemia as a prevalent national problem in that country. The supplements were delivered through the village health workers directly to the women, alongside de-worming medications.”

The medical expert reiterated that the protein deficiency problem in Nigeria has been on the rise, with various research surveys and reports confirming the indices are at a high level in the nation.

She said: “Data extracted from the Nigerian Protein Deficiency Report states that about 51 per cent of the survey respondents did not have access to protein-rich foods because of the high costs.

She advised the government to utilise a multi-pronged approach to implement the nutrition policy to alleviate malnutrition in Nigeria.

“To design and implement an effective nutritional protein policy, public awareness and education about the benefits of protein should not be limited to school education and theory only,” she asserted.

She added that “re-learning and a lifelong familiarity about the benefits of protein to the home-maker should be taught consistently in public spaces like hospitals, primary health care centres, community centres and even in religious centres.”

She posited that agriculture food production policies could also support farmers by way of fertilizer and farm-to-market transport subsidies.

She said: “Government-initiated protein produce purchases will aid small- and large-scale farmers in various regions across the board and also encourage farmers to produce protein-rich plants for livestock feed and average consumers.”

She equally advised that the agricultural supply chains can be enhanced by import/export policies that prioritise protein-rich foods.