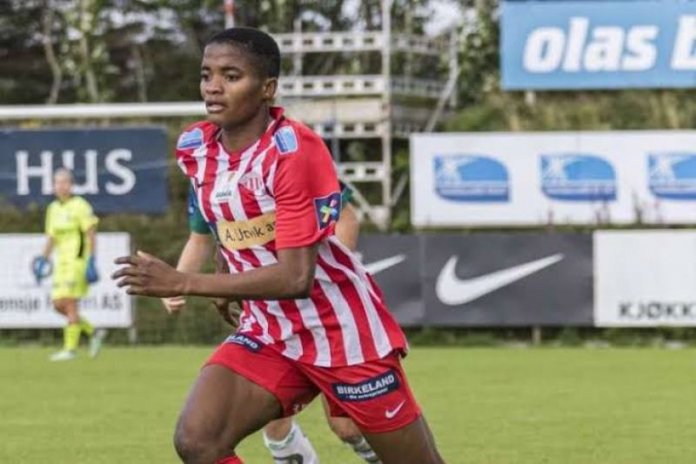 Scores 6th goal of the season
Rasheedat Ajibade put up another fantastic display as her goal inspired Avaldsnes 3-1’s comeback victory over Lillestrom in yesterday’s Norweigan Toppserien encounter.
The Nigeria striker grabbed her sixth league goal of the season with the opener in Avaldsnes’ 1-1 draw at Lyn before a brace in a recent 5-0 Norwegian Women’s Cup triumph over Amazon Grimstad.

The Super Falcons star earned her 14th league start this season in Friday’s encounter and her strike was enough to help her side subdue the defending champions for a ninth win of the season.
The titleholders made a bright start to the contest when Tonje Pedersen fired the hosts in front from distance off a brilliant pass from Emilie Haavi in 23rd minute to break the deadlock.

After the break, the visitors staged a fightback but only found a breakthrough when Hanna Dahl set up Ajiade to notch the equaliser with a fine strike in the 71st minute.
Nine minutes later, the visitors gained the lead thanks to an own-goal from Justine Vanhaevermaet before Holmfridur Magnusdottir teed up Elise Thorsnes to seal the victory four minutes from time.

Ajibade played for the duration of the encounter and has now scored seven goals in 14 league matches and 10 in all competitions this season for Avaldsnes.
The result moves Avaldsnes to second on the log on goal difference despite being tied on 31 points from 14 matches with leaders Valerenga.
Following the win, they will continue their Norwegian Toppersein title pursuit against Rosenborg in their next outing on October 31.