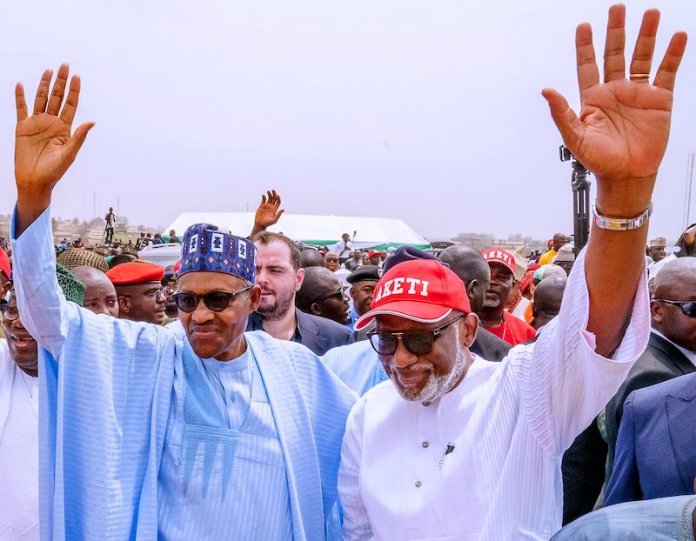 President Muhammadu Buhari has congratulated Governor Rotimi Akeredolu (SAN) on his re-election as governor of Ondo State for another four-year term, saying his victory shows that one good turn deserves another.
The Peoples Democratic Party (PDP), whose candidate, Mr. Eyitayo Jegede (SAN), came second, has, however, said it would study the result of the Independent National Electoral Commission (INEC), which yesterday declared Akeredolu of the All Progressives Congress (APC), as the winner of last Saturday’s governorship election in the state.

Akeredolu won in 15 out of the 18 local government areas in the state.
Announcing the final results, the Returning Officer and the Vice-Chancellor of the University of Ibadan, Prof. Abel Idowu Olayinka, said Akeredolu scored 292,830 votes, while Jegede garnered 195,791 votes to emerge second.
Akeredolu’s deputy, Mr. Agboola Ajayi of the Zenith Labour Party (ZLP), could not muster a win in his local government area of origin, Ese Odo.

Ajayi who hails from Kiribo in Ese Odo LGA posted 4,760 votes in his local government against APC’s 13,383 votes and PDP’s 4,680 votes.
Ajayi returned with 69,127 votes to come distant third in the contest.
With over 97,000 votes between Akeredolu and Jegede, the Ondo State governor won.
Saturday’s election was the second time Akeredolu and Jegede would contest against each other for the same office.

The two SANs squared up in the 2016 governorship election, which brought in Akeredolu, as the governor, for the first term.
The breakdown of the results showed that Akeredolu won in 15 out of 18 local governments, Jegede won in three local governments while Ajayi won none.

In his address to the people of the state on his victory, Akeredolu, described his main challenger, Jegede as a worthy adversary.
Akeredolu said Jegede’s participation in the electoral process was historic.
He said: “Jegede’s patriotism is not in doubt. His love for the people is unassailable. He is indeed a worthy adversary. Our state is indeed blessed for having people of his quality.”

Akeredolu said the renewal of his mandate, was an eloquent testimony to the degree of acceptance the people of Ondo State have for him.
He said: “It affirms that the confidence reposed in our administration remains unshaken. It is a statement on your assessment of our performance in the last three and a half years.
“It is unequivocal, direct, inspiring and soul lifting. It is awesome. It is a reward for hard work, dedication, focus, honesty and patriotism.

“It is also a challenge to us for rededication to service in the interest of our people. On this, we shall not relent.”
He said the administration has not relented in the promises made when he was elected for the first term, adding that the achievements in various sectors, are testimonies for the dedication to serve the people.

He promised that the administration shall continue to make people its priority.
Though Jegede was not available for comments on the outcome of the election, the spokesman of his campaign organisation, Mr. Gbenga Akinmoyo, has commended the people that voted according to their conscience.

He said: “We use this medium to thank the good people of Ondo State who voted yesterday according to their conscience; thanks to the loyal members of PDP at local, state and national levels who took ownership of this project and executed it.

“This is God’s project and since it remains so, “We wait, eyi ni ise Oluwa.”
Meanwhile, in a statement issued yesterday by the Special Adviser to the President on Media and Publicity, Mr. Femi Adesina, the president lauded the resounding victory of the governor at the election, noting that the votes garnered show that one good turn surely deserves another.

The president urged the governor-elect to be humble and magnanimous in victory, and serve the people of Ondo State even better than how he did in the first term.
“When you serve with heart and might, the people respond in like manner, and we can easily get to where we are headed as a country,” Buhari said.

The president commended INEC for organising a credible, free and fair election, and saluted the security agencies that ensured that orderliness was enthroned and maintained.
He commended the people of Ondo State and the APC for keeping faith with their governor, noting: “The people know the person and party that truly serves them, and have spoken in clear voice and unmistakable terms.”

While the PDP in Ondo State said it would study the outcome of the election, the APC, the President of the Senate, Dr. Ahmad Lawan, Lagos State Governor, Mr. Babajide Sanwo-Olu, the Governor of Ekiti State, Dr. Kayode Fayemi, and Kwara State Governor, Mr. AbdulRahman AbdulRazaq, have lauded Akeredolu on his victory.

The Secretary of the APC National Campaign Council on Ondo 2020, Governorship Election and the Acting Secretary of the party, Mr. Mustapha Saliu, said in Akure yesterday that with the loss of the Ondo governorship election, the PDP has lost its capacity to win any other election in the country.

Saliu noted that the Edo and Ondo elections were two different scenarios which the PDP had earlier tailored their narratives towards.

The secretary said that the opposition PDP no longer has meaningful ideas and programmes to offer the people.
While berating PDP for not exhibiting the spirit of sportsmanship, the Secretary of the Campaign Council stressed that with the obvious outcome of the election, PDP ought to had done the needful just like APC did after the Edo State election.

However, the PDP in Ondo State yesterday said it would study the results of the election and take an appropriate action.
The Publicity Secretary, Mr. Kennedy Peretei, stated this in Akure while speaking with journalists on the just concluded election.
Peretei, who spoke at the residence of the party’s candidate in Akure urged supporters of the party to be optimistic about the party.

The PDP publicity secretary urged their supporters to be in high spirit alleging that there were pockets of violence during the election.
Also reacting to the election, the President of the Senate, Lawan, described the re-election of Akeredolu as a referendum on his first four years of stewardship.

Lawan, in a congratulatory message to Akeredolu noted that the election was a referendum on the stewardship of Akeredolu since 2016, adding that the governor has passed the examination in flying colours.

He also congratulated the ruling APC on the victory of its candidate at the election, saying the triumph is well-deserved and heart-warming.

The Senate president commended the people for their peaceful conduct at the poll, which has demonstrated their confidence in their country’s democratic process.

Fayemi also congratulated Akeredolu on his re-election for a second term in office.
In a statement issued yesterday in Ado-Ekiti, Fayemi said Akeredolu’s electoral victory was an attestation to the fact that the electorate would always reward a performing leader and administration with their votes.

He also commended the people for their peaceful conduct at the poll, a situation, which he said greatly reduced the pre-election tension in the state in addition to crippling the antics of purveyors of violence.

Kwara State Governor, AbdulRazaq, has also congratulated Akeredolu on his victory, saying the victory was deserving.
In a statement signed by the governor’s Chief Press Secretary, Mr. Rafiu Ajakaye, the governor said: “I congratulate His Excellency, the Governor of Ondo State on his victory. It is a deserving reward for his good works.”

Sanwo-Olu, who is the chairman of the APC National Campaign Council for Ondo State Governorship election, said Akeredolu’s success in the election is a validation of people’s acceptance of his administration, having impacted positively in their lives during his first term in office.

Speaking yesterday at Akeredolu’s residence in Owo shortly after the INEC declared him and his running mate, Hon. Lucky Aiyedatiwa as governor-elect and deputy governor-elect respectively, the Lagos State governor said the people of Ondo State deserve commendation for coming out in large numbers to perform their civic responsibility and for defying all odds to vote for APC-led administration in the state.

A former National Chairman of APC, Mr. Adams Oshiomhole, felicitated with Akeredolu.
“With this emphatic victory, the good people of Ondo State have surely expressed their appreciation for Akeredolu’s stellar performance in the last four years. Truly, he is tested and trusted.
“I wish Akeredolu’s wisdom and God’s speed as he continues to serve as the people’s governor of Ondo and a bridge-builder,” Oshiomhole said in a statement last night.