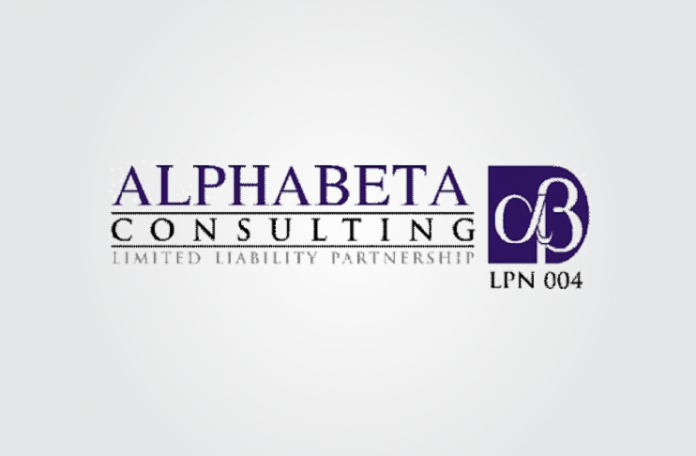 Controversies trailing the activities of Alpha Beta, a consulting firm in Lagos took a new twist yesterday with the management of the company describing its former chief executive, Mr. Dapo Apara as a fugitive hiding from prosecution over some misconducts and that his allegations against Asiwaju Bola Tinubu showed that he was bent only on creating sensational headlines to deflect attention from his alleged criminal activities.

Alpha-beta is a consulting firm handling the computation, tracking and reconciliation of Internally Generated Revenue (IGR) in Lagos State in return for a commission, a service, which Apara alleged was fraught with fraudulent activities.

However, in a swift response to the report on a legal battle initiated by the former CEO, the current Managing Director, Akin Doherty who was also indicted in a petition to the Economic and Financial Crimes Commission (EFCC), said in a statement that his predecessor was removed for fraud and unethical practices.

Claiming that the company was yet to be served any notice from the court, Doherty described the development as an extension of his (Apara’s) campaign of calumny launched to avoid the consequences of his fraudulent conduct over the years.

According to the statement, “The fact is that Dapo Apara turned to blackmail after his removal as Managing Director of Alpha Beta for fraud and unethical practices. While he was MD, Apara used his position to siphon huge sums of money from the company including but not limited to fraudulently converting $5 million; money allegedly used to pay for cloud-based services that were eventually discovered to be worth less than $300,000.

“Mr. Apara, who was a signatory to all the bank accounts of Alpha Beta from inception until his removal, received all his payments and entitlements until June 2018 when he was removed after his fraudulent misconduct was discovered.

“In July 2018 further evidence of his fraudulent and unethical practices was uncovered, including the revelation that he converted approximately N6 billion belonging to Alpha Beta to his personal use. This fraud was reported to the authorities. When it was discovered that Mr. Apara had fled the country, he was invited to return to Nigeria from his hiding place in Dubai to render account.

To date, he has refused to do so. Instead, Mr. Apara embarked on an aggressive smear campaign in an effort to blackmail us into ending the investigations into his misconduct.”

On the allegations against the company’s management and the Senator Bola Tinubu, Doherty described the court action as a rehash of futile legal actions embarked upon by Apara since 2018 before he allegedly fled the country.

According to the statement, “Contrary to the sensational headlines, designed to embarrass and blackmail, the case presented by Mr. Apara does not disclose even a single piece of evidence of fraud or criminal activity on the part of any of the alleged defendants. The case brought by Mr. Apara is, simply put, an extension of his campaign of calumny; launched to avoid the consequences of his fraudulent conduct over the years.

“This court action by Dapo Apara is the continuation of Mr. Apara’s blackmail tactics and an attempt to distract from the huge funds he misappropriated from Alpha Beta while he was in charge of its affairs.

“Since 2018, he has filed many suits in Lagos and Abuja on the same matter, engaged in Arbitration, the Police, EFCC and ICPC. However, in all that time, he has steadfastly refused to honour all invitations by the authorities to return to Nigeria and account for the huge funds he misappropriated.

“The uncorroborated allegations against Asiwaju Bola Tinubu by Dapo Apara, in particular, show that he is bent only on creating sensational headlines to deflect attention from his on criminal activities.

“Although, we have not been served with the court summons, we look forward to the opportunity the case provides to publicly present the full picture of Mr. Apara’s misconduct, deceit and fraud and to have the matter resolved by the court once and for all.”

Apara had dragged the company; the National Leader of All Progressives Congress (APC), Senator Bola Tinubu; and the current Managing Director of the firm, Mr. Akin Doherty, before a Lagos State High Court in Igbosere.

In the writ of summons marked LD/7330GCMW/2020, Apara asked the respondents to appear within 42 days or judgment may be given in their absence.

Apara had in a petition addressed to the Economic and Financial Crimes Commission (EFCC), accused the company of N100 billion fraud.

In his statement of claim, the former Alpha Beta boss said Tinubu boasted that the suspended acting Chairman of the EFCC, Mr. Ibrahim Magu, would protect him.

“The 2nd defendant (Bola Tinubu) also warned the claimant not to even think of exposing his involvement in the financial affairs of the 1st defendant (Alpha Beta) to the EFCC as the then acting Chairman of EFCC, Ibrahim Magu, will always protect him (Tinubu).”

Apara also narrated how Alpha Beta was formed in 2002 when Tinubu was still the governor.

He said he was the one who came up with the idea of a consulting firm helping the state government to track and reconcile taxes.

The claimant said Tinubu accepted the proposal but gave many conditions, including that his own people would own 70 per cent stakes in the company.

He added that Tinubu nominated Adegboyega Oyetola and one Olumide Ogunmola

The former Alpha Beta boss stated: “The claimant avers that following the presentation of his proposal to the Lagos State Government, the 2nd defendant (Tinubu) who was at the time the Governor of Lagos State demanded that 70 per cent equity interest in the project be assigned to a certain Olumide Ogunmola before the 2nd defendant will approve the project.

“The claimant avers that following the agreement alluded to above; Alpha Beta Consulting Limited was incorporated in 2002 with the following shareholders: Dapo Apara (30 per cent), Olumide Ogunmola (40 per cent) and Adegboyega Oyetola (30 per cent).”

He said Tinubu later directed that Oyetola’s shares be transferred to one Tunde Badejo.

Apara stated that Tinubu controlled the company which was receiving 10 per cent of tax collected on behalf of the state.

He said due to the technological innovation that was deployed by him, the Internally Generated Revenue of the state grew from N10billion per annum in 2002 to N300billion in 2019.

The claimant stated that in 2010 or thereabout, Tinubu directed that the incorporation structure of the Alpha-Beta Consulting Limited be changed from a limited liability company to a limited liability partnership under a newly promulgated law in Lagos State.

He said the aim of the move was to shield Tinubu’s involvement from public scrutiny.

The claimant said in 2014, Tinubu asked Ogunmola to step aside while he was named managing partner.

Apara said as the head of the company, he began looking into its finances and he made many startling discoveries such as mysterious transfers of over N20billion in different currencies to several companies.

The former Alpha Beta boss said he realised that all the payments were sanctioned by the partners nominated by Tinubu and they were done without his knowledge contrary to the terms of their partnership.

Apara stated that Tinubu was furious that he was looking into the company’s finances and ordered that he be demoted to deputy managing partner.

He said he refused to obey this order and this led to a feud between the both of them.

The former Alpha Beta boss said he was forcibly removed from office while Tinubu’s former Commissioner for Finance, Doherty, was named the new head of the company.

He said since his illegal removal, he had been denied of his dividends as a founding partner of the company and asked the court to order full payment of his entitlements.