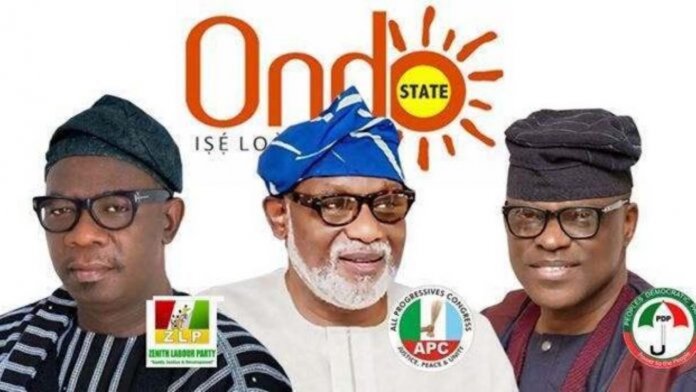 The governorship candidates of the All Progressives Congress (APC), Governor Rotimi Akeredolu and that of the Peoples Democratic Party (PDP), Mr. Eyitayo Jegede, yesterday engaged in live TV debate where both promised the people of Ondo State, of good governance if declared winner in the Saturday governorship election in the state.

The two candidates also promised to boost the education sector, health sector and create jobs for the people, while putting security at the front burner of the their administration.

Akeredolu who is seeking a second term in office, assured the people of Ondo State that he would sustain the existing infrastructure development, which he has achieved in the last four years and also do more in the area of job creation, education, health, security and revenue generation for the state.

“I believe in continuity and I intend to complete some of the projects I have already started, if given the opportunity to govern the state again. We have clear direction of where we are going and we want the good people of Ondo State to vote APC for continuity,” Akeredolu said.

But Jegede accused Akeredolu of under developing some parts of the state like the Illaje area, and also inflicting high cost of education on the people of the state.

He promised the people of Illaje community of better development if voted into power.

Jegede said education, health and infrastructure would be his key focus area, and that he would ensure quality education that would be pocket-friendly.

Jegede said with his over seven years of private and public sectors experience, he would deploy such experience to governance if elected as the next governor of the state.

“We have challenges in the health sector of the state but I promise to confront it and give our people better healthcare delivery system if voted for. I am bothered about the high cost of health services in the state and I hope to address all of that and reduce cost of education and create jobs in the state, if voted for,” Jegede said.

For economic development, Jegede said he would introduce a tax system that would be easy for the people, while Akeredolu said he would focus on new ideas to raise IGR, without focusing so much on taxing the people.

Speaking on the security architecture of the state, Akeredolu expressed his dissatisfaction over the collapse of security.

“I can assure you that I’m not pleased with our security architecture in the state today. I am one of the strong advocates for multi-level policing, which the country is ripe for. The collapse of security in Ondo and other South-west states, compelled some of us to seek for alternative security network, which we named Amotekun, which is backed by law and it has come to stay,” Akeredolu explained.

But Jegede accused Akeredolu of increasing school fees beyond the financial capacity of poor parents.

“For eight years before Governor Akeredolu came into power, the tuition fees were between N25,000 and N35,000 per session, but as soon as he came in, it was increased to N150,000 which he later reduced a little after criticism. We have a number of our students out of school and teachers are not being encouraged because of non-payment of salaries.”

Akeredolu however said the fees were increased by the university governing council, stressing that when the students protested and came to him, it was later reduced.