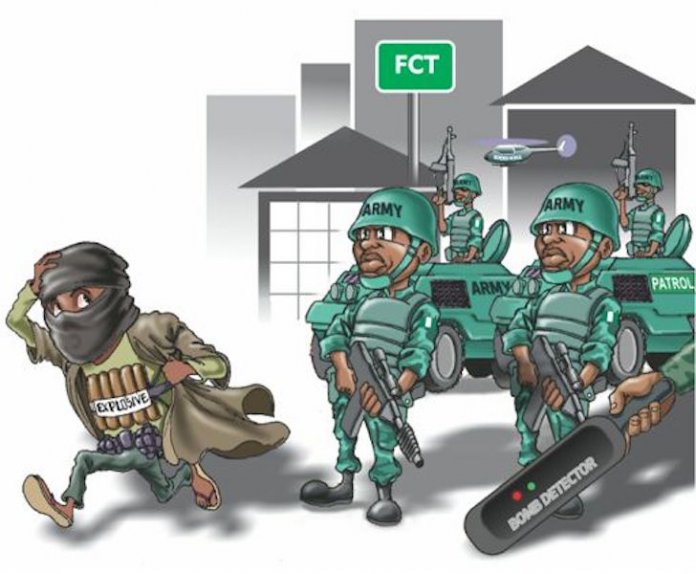 Aside the brutal incursion of Boko Haram insurgents in 2012 and 2013, the Federal Capital Territory (FCT) has been relatively insulated from the violent regime of crimes and criminality across the country. Not anymore. It started with occasional cases of opportunistic criminals robbing unsuspecting passengers inside commercial vehicles – an act dubbed as ‘one chance’. But the situation has since escalated. In recent times, Abuja has assumed the status of any other city in the country – threatened, harassed, brutalised and violated by bandits, kidnappers, armed robbers, terrorists and killers.

Initially, the rising tide of insecurity was confined to the satellite communities which are home to low income earners. Angry youths bereft of opportunities and others fleeing the war zone in the Northeast had been moving into communities like Kuje and Gwagwalada that are often under attack. Last November, some residents of Pegi in Kuje area council staged a peaceful protest to draw attention to frequent cases of kidnapping and killings in their domains. This followed the kidnapping by bandits of a traditional ruler in the Kuje area, who only secured his freedom after ransom was paid. But the insecurity has since spread from the fringes to the city centre with striking regularity. In one audacious attack, gunmen opened fire on a public transport vehicle and seized some passengers. Reports of kidnap are now almost a daily occurrence while the Abuja-Kaduna highway is still as risky as ever, despite all the noise to the contrary.

As we have repeatedly pointed out on this page, the general atmosphere of national insecurity points to poor use of pre-emptive intelligence and a lack of coherent strategy by the relevant agencies. That then explains why today, the nation quivers under threats of unknown colouration, with sundry mischief makers prancing forward to contribute whatever they can for reasons of their own. But the authorities should be worried by latest developments. When residents of the capital city of a country not only move around with a sense of foreboding and fear but also feel uncertain about the capacity of the authorities to deal with the challenge, then there is a problem. It’s either the security agencies are not doing enough or their response to the challenge has been heavily compromised.

Earlier this month, the Nigeria Customs Service (NCS) alerted its staff and by extension, residents of the FCT and adjoining states of Boko Haram’s planned attacks on some selected targets. The identified enclaves, according to the NCS circular, include Kunyam Bush along airport road, Abuja, Robochi/Gwagwalada Forest, Kwaku Forest Kuje – and two other areas in nearby Nasarawa and Kogi States. Some bandits partly made good the threats when they struck recently at Tunga Maje, in the Gwagwalada axis of the FCT and seized 20 persons, including women and children. This was despite the assurance by the Defence Headquarters that the general public should go about their lawful businesses undeterred.

Given that the alert emanated from NSC, the apprehension is that the security forces are not getting the right information concerning the security situation in Abuja. And where they are getting such information, they are not well processed. And even when they are, the courage to carry them through is grossly lacking. The spate of violence across the country has prompted several critical stakeholders to call for an urgent review of the national security architecture. It ought to concern President Muhammadu Buhari that confidence in the security agencies is declining at a time when public confidence is rapidly shifting to sectional and regional security arrangements. The urgent imperative therefore is for the president to realise that a government that cannot guarantee the security of life and property for citizens and residents in a country has failed.

Meanwhile, as much as the security and safety of all the people in Nigeria should be the primary concern of the government, we must highlight the strategic importance of Abuja not only as the seat of power but also the home to all foreign embassies and international agencies. If Abuja is not safe, then Nigeria is not safe.
Quote
When residents of the capital city of a country not only move around with a sense of foreboding and fear but also feel uncertain about the capacity of the authorities to deal with the challenge, then there is a problem