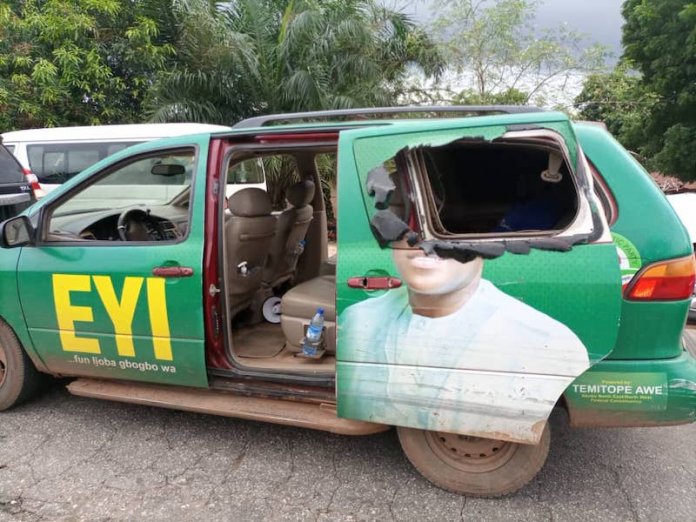 The Peoples Democratic Party (PDP) Campaign Council for the Ondo State governorship election yesterday condemned the attack on its governorship candidate, Eyitayo Jegede, by men in the convoy of the state Governor Rotimi Akeredolu, in which PDP members were allegedly severely wounded and the PDP campaign vehicles vandalised.

The PDP National Publicity Secretary, Kola Ologbondiyan, while addressing a press conference at the national secretariat of the party, alleged “that the attack by APC assailants with the governor reportedly in the convoy, confirmed that the state governor is mortally afraid of Jegede as a result of his soaring popularity and now seeks every means to scuttle the decision of the people to elect him (Jegede) on October 10. He said it is indeed unfortunate that Akeredolu would opt to tread such path, as already confirmed by the self-confessed APC militant and former APC chairman in Ondo State, Isaac Kekemeke, who openly boasted that the governor was behind the violent attacks against the candidate and campaign in the state.

Evidently, he said the governor and his party “are intimidated by Jegede’s soaring rating as well as the warm reception he has been receiving from leaders and groups across the state, and had to attack him in Oba Akoko, where he was received by the highly revered Oloba of Oba, Oba Nathaniel Adegoroye.”

The PDP spokesman said the party knew that Akeredolu’s uneasiness over its candidate had heightened following the overwhelming crowd of the Ondo people who graced the campaign flag-off last Saturday to establish their unbending solidarity for Jegede.

He said: “Of course, our candidate has become the rallying point of the people in their quest to rescue their state from the misrule of the governor.

“Our campaign council appreciates the courage displayed by the people of Ondo State in resisting the APC assailants and defending our candidate. Indeed, but for the intervention of the good people of the state, who immediately came out to defend our candidate, the situation would have been worse.”

The PDP said it appreciated well-meaning APC members who had called its candidate and the campaign to condemn the attack and show solidarity with the PDP candidate.

The spokesman said the PDP seriously condemned the action of the police and other security operatives attached Akeredolu’s convoy for taking no steps to stop the attackers, who also threatened other innocent citizens.

According to Ologbondiyan, “Our campaign further restates the call by our party and other well-meaning Nigerians to Governor Akeredolu to stop being a sore loser as he would not be the first state governor in our country that would lose in an election due to poor performance.

“Akeredolu should come to terms with the fact that his time is up. He should accept the decision of the people of Ondo State to replace him with Jegede as no amount of violence, threats, mudslinging and propaganda can change that resolve.

“On our own, our candidate, who is the people’s candidate, will remain undeterred in our focus to provide good governance for the people of the state.”