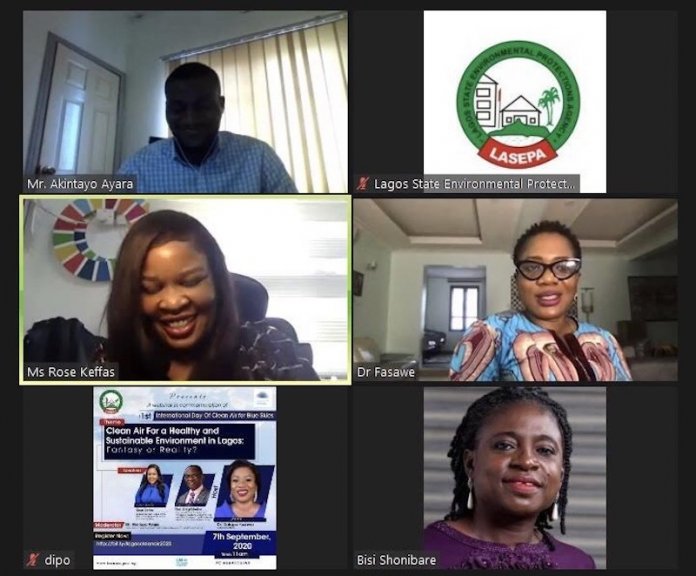 According to 2012 released annual State of the Global Air Report published by the Health Effects Institute (HEI), air quality in Nigeria and at least 10 other countries is among the deadliest anywhere on earth with higher than ambient air pollution death rates as a result of the environmental hazards combined with extreme pollution sources like generator fumes, vehicle emissions and crop burning among others.

Long-term health effects from air pollution include heart disease, lung cancer, and respiratory diseases such as emphysema. Air pollution can also cause long-term damage to people’s nerves, brain, kidneys, liver, and other organs.

Short term effects on the other hand include global warming, climate change, acid rain, smog effects, deterioration of fields (Contaminated water and gases seep into the earth, changing the composition of soils. That directly affects agriculture, changing crop cycles and the composition of the food we all eat), chemical sensitivity, deterioration in building materials and skin damage.

Only Afghanistan with 406; Pakistan, 207, and India, 195 deaths per 100,000 people per country, exceed the Nigerian figure. The chart showcases a striking gap between the most and least polluted air around the world. While developed countries have experienced success in reducing emissions and air pollution levels, poorer nations have fallen behind, although it should be noted that tougher pollution controls are being introduced in some of the countries. In 1990, 3.5 billion people were exposed to it and that has now fallen to 2.4 billion despite an increase in the global population.

Bringing it home, according to a 2016 World Health Organisation report, Onitsha, Kaduna, Aba and Umuahia were among four of the 20 African cities with the worst air quality in the world. The WHO measured air quality by examining the annual mean concentration of particulate matter in nearly 3,000 cities across the world with populations of at least 100,000. Onitsha’s average annual PM10 was 594 – nearly 30 times greater than the WHO-recommended annual level of 20. Kaduna, Aba, and Umuahia cities were ranked among the top 20 worst cities measured by PM10, ranking 8th, 9th, and 19th, respectively

Lagos, which is the commercial nerve centre of Nigeria, is not left out. Having been identified as one of the fastest growing megacities, this means the concentration might be many times higher than the thresholds recommended by the WHO. Given the urban nature of the state and its rapid urbanisation and industrialisation, this has contributed to the exposure of people to ecological problems and changing climate conditions, with its attendant negative effect on human health.

In Lagos for instance, an estimated seven million people died from diseases related to indoor and outdoor air pollution in 2012 according to the WHO. Part of the problem is that environmental regulations and enforcement are lax; people are more exposed to air pollution but less able to protect themselves from exposure either in the open, in the workplace or at home.

Although the above statistics for Lagos was in 2012, the present General Manager of Lagos State Environmental Protection Agency (LASEPA), Dr. Dolapo Fasawe, is bent on changing that narrative and turn Lagos into a clean city in line with best global standards.

How does she intend to do this? The environmental Amazon hopes to put policies and action plans in place to improve air quality in the state. Beyond rhetorics, she has moved on to put plans in motion to accelerate interventions targeted at reducing mortality associated with air pollution.

Making public her plans in a recent webinar session themed “Clean Air for A Healthy and Sustainable Environment in Lagos (Fantasy or Reality)”, in commemoration of the First International Day of Clean Air for Blue Skies, she said the state government, under the leadership of Governor Babajide Sanwo-Olu, has put machinery in motion to accelerate policies and action plans aimed at improving air quality in the state.

While highlighting the emergence of air pollution as the number one public health risk associated with millions of death worldwide, she said the statistics calls for serious attention, adding that “we should be worried about air pollution as the World Health Organisation (WHO) attributes over 4 million deaths to ambient air pollution globally, with the majority being respiratory and Cardio-Vascular diseases.

“Some studies have associated areas with poor air quality with higher risk of COVID-19 hospital admission and mortality. Although these studies are not conclusive, they give an indication of the danger posed by poor air quality and the need to address same urgently”.

According to her, rapid urbanisation and industrialisation of Lagos has contributed to the exposure of people to ecological problems and changing climate conditions, with its attendant negative effect on human health.

Reiterating that the development is a wake-up call to accelerate interventions and policies aimed at improving air quality, in order to increase the chances of preventing mortality associated with air pollution, she listed vehicular and industrial emissions as major sources of air pollution in the state, noting that the metropolis observed and enjoyed very good Air Quality Index (AQI) during the period of the nation-wide lockdown as a result of the restrictions placed on both human and industrial activities.

She said the state government is committed to the deployment of Air Quality Monitoring Stations at strategic locations in Lagos to enable the government measure criteria air pollutants on a 24-hour, real-time basis, to serve as foundation for developing informed policies and actions towards improvement of air quality.

Thus, to mitigate the health risk associated with air pollution, “the agency will also be carrying out a public air quality awareness campaign particularly in exposed communities such as people living in areas with high vehicular movement and industrial activities. This campaign will target high risk communities with high prevalence of avoidable high risk behaviours,” the general manager added.

On the level of preparedness of the state government to cope with environmental challenges that will accompany increasing population and industrial growth of the state, Dr. Fasawe stated that with consistent advocacy, adequate incentive and full engagement of the private sector as well as government relevant stakeholders such as LAMATA and Ministry of Energy & Mineral Resources, the use of public transport by the populace can be significantly increased, so as to reduce the number of vehicles on the road and lessen the air pollution burden on the environment.

In his presentation, Prof. Gregory E. Erhabor, Consultant Pulmonologist & Professor of Medicine, Obafemi Awolowo University, Ile Ife, analysed the risk of air pollution on respiratory and cardiovascular diseases. According to him, the World Health organization (WHO) reported in 2016 that 91 per cent of the world populations were living in places where the air quality guidelines levels were not met.

Professor Erhabor revealed that Particulate Matter (PM), Ozone (03), Carbon Monoxide (CO) and Oxides of Nitrogen (NOx) are major pollutant with adverse effect on human health. He listed the effect of exposure to air pollutants on humans to include respiratory, cardiovascular, dermal and neurological diseases, especially in countries with high industrialisation and lax air quality legislation. He therefore called for strict legislations to protect the lives of people in polluted industrial areas.

The Role of SDGs

The Special Assistant, Office of the Special Assistant to the President on SDGS, Ms Rose Keffas highlighted that the Sustainable Development Goals 1, 2.3, 6, 7, 8, 9, 11, 12, 13, 14, and 15 respectively addresses the threat of air pollution to human development, with their strong focus on poverty reduction and promotion of healthy living.

Noting that it is disheartening to lose four million people annually to traditional pollutants especially due to poverty-related factors, Ms Keffas said, achieving Sustainable Global Development requires strong action, such as reduction of people’s exposure to traditional environmental pollutions linked to poverty, such as household air pollution and unsafe water sources. Promoting cleaner alternatives including the use of improved cook stoves and modern fuels can drastically reduce air pollution.

With the global statistics stating that Nigeria has the highest burden of fatalities from air pollution in Africa and ranks fourth globally, the government must put tougher pollution controls if it hopes to effectively combat air pollution by producing safer and more environmentally friendly alternatives.

This they can do by increasing the public awareness of air pollution and the burden of diseases that it imposes on people. Also, the role of workable policies should not be left out in making viable changes.