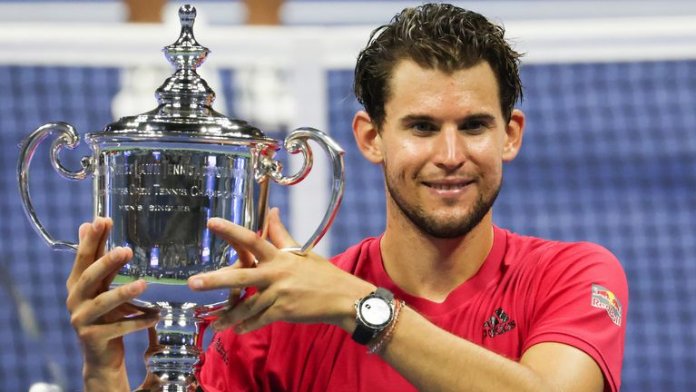 US Open champion Dominic Thiem has said that his “whole life” has been dedicated to winning his maiden Grand Slam title.

“I achieved a life goal, a dream of myself, which I had for many, many years,” the world number three said.

“I dedicated basically my whole life until this point to win one of the four majors. Now I did it. That’s also for myself a great accomplishment.

“I mean, it’s by far not only myself, it’s an accomplishment from all my team, from all my family. I guess also today is the day where I gave back a huge amount of what they did for me.”

Thiem is the first man born in the 1990s to win a Grand Slam singles title.

He has been one of the most consistent players on the ATP Tour over the past five years, winning 17 titles and qualifying for every year-end ATP Finals since 2016.

Thiem has now reached the final at the Australian, French and US Opens, but that success has so far not translated to Wimbledon, where he has won only five matches in the six years he has competed at SW19.

This year’s US Open was an unusual tournament, where several top players did not compete because of the coronavirus pandemic, and the event was held behind closed doors in almost empty stadiums.

That led to some pundits and players suggesting there would always be an asterisk next to the winners in the history books.

However, while six of the women’s top 10 did not play, only 2019 champion Rafael Nadal of Spain, injured Swiss great Roger Federer and France’s Gael Monfils were missing from the men’s top 10.

Serbian top seed Novak Djokovic also suffered an unusual early exit after being defaulted for hitting a ball at a line judge in his fourth-round match.

Thiem blamed his nervous start on the pressure of going into the match labelled as the favourite.

He had previously lost the 2018 and 2019 French Open finals to Nadal, before Djokovic fought back from 2-1 down in sets to beat him in February’s Australian Open showpiece.

“We both didn’t face one of the ‘big three’, so I guess that was in the back of the head for both of us,” said the Austrian.

“That’s why we were nervous. It was a very good chance for the both of us.”

He said he thought that now he had one Grand Slam title it would be easier for him to chase more success at the highest level.

“Because, of course, I had it in the back of my head that I had a great career so far, way better career than I could ever dreamt of, but until today there was still a big part, a big goal missing,” he added.

His next opportunity for Grand Slam success will come round quickly, with the rescheduled French Open beginning on 27 September.