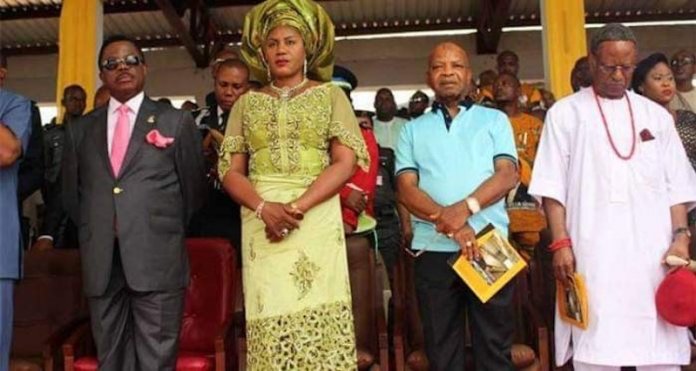 David-Chyddy Eleke reports that the rift between Anambra State governor and some traditional rulers in the community who are loyal to oil mogul, Prince Arthur Eze has escalated

When the rift between oil mogul, Prince Arthur Eze and Anambra State governor, Chief Willie Obiano started, no one expected that it will reach the level where some traditional rulers would ditch Obiano whom they all supported, and move to pitch tent with Eze, but that is exactly what it has become. The fight between the two sons of Anambra has also robbed 13 traditional rulers in the state of their position, as they are now suffering like the grass does when two elephants fight.

Eze had weeks back promised to lead selected traditional rulers of the state to see President Muhammadu Buhari, while also boasting to report Obiano to Buhari for his refusal to hold council elections, and also refusing to pay five per cent of the state’s income to monarchs. He made good his words by leading 13 monarchs to Abuja in the week that followed, but Eze and the monarchs were unlucky, and the trip turned awry, as the president allegedly refused to meet them.

The news of the failure of Eze and the monarchs set tongues wagging in Anambra, just as government officials and their aides made a laughing stock of the monarchs. A video of the monarchs allegedly sharing money in the home of the billionaire oil mogul further made their case worse and it was immediately tagged as bribe money given to them by Eze to convince them to join him to the Abuja trip. Some commentators even tagged the revered traditional rulers as ‘renegades’.

To redeem their image, Eze and the monarchs stayed back in Abuja in the hope of accomplishing their mission, but instead, they ended up seeing the Chief of Staff to the president, Prof Ibrahim Gambari after many days of wait. In the meeting, the monarchs commended the president for the various projects it has been embarking on in the South-east. The monarchs named the projects to include; the second Niger Bridge, the Ziks Maosoleum, the Enugu-Onitsha expressway, and the Owerri-Onitsha road too. Contrary to allegations that they planned to report Obiano to the president, no mention of Obiano was made during the meeting.

As innocent as the visit could be, the Anambra State Traditional Rulers Council quickly held a meeting recommending the suspension of the travelling monarchs, on the guise that part of the rules of the council was that no traditional rulers was permitted to travel outside the state without obtaining permission from the governor of the state, or even the local government chairman.

Igwe Alfred Achebe the chairman of the council who briefed journalists after their meeting said, “The traditional rulers leaving their respective domains without notifying either the state or their respective local governments, have violated the code of conduct prescribed for their office.”

Acting according to the recommendation, Obiano last week placed one year suspension on 12 traditional rulers out of the 13 that embarked on the trip. He rightly gave his reason for the action as travelling out of the state without alerting him.

Though it was not clear who the 13th monarch was, but it was suspected that Igwe Peter Uyanwa of Ukwulu or Chief Austin Ndigwe could be the 13th. Though no reason was given why the 13th monarch was not suspended, but a source told THISDAY that Uyanwa had earlier been suspended, having been the first casualty of the Obiano/Arthur Eze fight, and as such cannot be suspended twice.

Chief Austin Ndigwe who is a factional monarch in Awka, the source said, could not also have been suspended alongside legitimate monarchs as he is seen as being illegitimate. “You can not suspend someone who is not a monarch, alongside with legitimate monarchs. Ndigwe is a private individual, and can go to Abuja anytime he likes. Suspending him will be like legitimising his Igweship,” the source said.

Already, almost all the monarchs who went on the journey are embattled, as their communities have commenced the process to remove them. The leadership and entire people of Alor community in Idemili South Local Government Area of Anambra State fired the first salvo, when it credited the inability of the monarchs to meet President Buhari to minister of Labour and Employment, Dr Chris Ngige. The community which revolted against its monarch, Igwe MacAnthony Elibe Okonkwo for ‘acting disgracefully’, called on the governor to remove him.
A press release signed by the President General of Alor People Assembly (APA), Sir Uzoma Igbonwa and made available to THISDAY in Awka thanked Ngige for the gesture, while also disowning Okonkwo for being among the monarchs who made the trip.

“This offers us the opportunity to thank our illustrious son and the Minister of Labour and Employment, Sen. Chris Nwabueze Ngige, for swiftly acting to prevent the total desecration of the Office of the Governor, before Mr President and the people of Nigeria.

“We, hereby wish to state our unequivocal support for the governor m and every step he has taken to restore sanity to our traditional institution, the suspension of erring traditional rulers that includes the purported Traditional Ruler of Alor. We, the good people of Alor are peace-loving, law-abiding and loyal to the Government of Anambra State. And we shall continue to do so.

“We, hereby dissociate our entire community from the actions of Igwe Elibe Mac-Anthony Chinedu Okonkwo, who was imposed on our community and has strangely been conducting himself to the disapproval of our people, culminating in the latest sabotage against the government of Anambra State.

“The state government may well see the reason the Alor community rejected this imposition on us by the former Governor, Mr Peter Obi and more reasons, the communities should be allowed to freely elect its traditional rulers in an atmosphere strictly guided by democracy, traditions and the norms,’’ the release read.

The call for the total revocation of Igwe Okonkwo’s certificate was even after he had dissociated himself from the travelling monarchs, while also tendering apologies to Governor Obiano and asking for forgiveness.

Okonkwo who was caught on camera alongside other monarchs counting wads of Naira notes purported to be bribe money given to them by Prince Arthur Eze also stated that he never received bribe to join other monarchs to Abuja, rather the money seen with him was meant for his aides and driver to procure fuel.
Other erring traditional rulers are also battling to retain their kingship in their communities. The latest are two monarchs from Obiano’s town; Aguleri. The two monarchs; their majesties Alex Edozieuno of Mkpunando and Peter Ikegbunem Udoji of Eziagulu communities were disowned by their communities. On Monday, Aguleri indigenes met at Obu Gad, the town square to protest against their conduct,saying that their disgraceful conduct can no longer be tolerated.

Elders of the community who spoke through Ichie Aruno Odefi called on the Anambra State governor, Chief Obiano to remove the two monarchs, saying that their conduct in the town has not only been disgraceful, but negates the love the town has for Obiano who is also a son of the soil.

“They can not continue to be monarchs. Aguleri town has five communities, but this very two Igwes have not represented us well. The height of it is joining other traditional rulers to Abuja to go and report our son, Obiano to Mr President. We have had enough and will no longer take it. If Obiano does not want to remove them, then let them become traditional rulers at the government house, and not for Aguleri communities,” he said.

The Presidents General of the five communities in Aguleri who also spoke through Barr Hippo Onwuegbuke condemned the two monarchs for joining 11 others in a trip that is meant to tarnish the image of a son of the soil (Obiano). He said even if they apologised as some other traditional rulers have started doing, the people will no accept their apologies because they are already fed up with their disgraceful conduct.

“Look at this crowd that trooped out to protest against them. What will you tell them that will appease them? The best thing is for the monarchs to toe the line of honour and resign their kingship. The people are already calling on Obiano to remove them as you can see.”

Though it is not clear what Prince Arthur Eze was doing to help the embattled monarchs who are on the verge of losing their traditional stools for associating with him, THISDAY gathered that as a way to appease them, each of the 12 suspended monarchs were given a brand new Lexus GL570.

Though this has not been confirmed as a close aide of one of the traditional rulers said even though his principal was back from the trip, they are yet to see the car gift. “We have not seen Igwe with any car that is not his official car. He has been back since two days now, but we have not seen any car, and no one has asked him.”

Meanwhile, the state government has made it clear to the monarchs that it will not tolerate any form of recalcitrance from them. In an earlier press release by the governor’s Chief Press Secretary, Mr James Eze, in which he announced the initial suspension of Igwe Peter Uyanwa, he cited clearly the instance of Kano State governor, Alhaji Abdulahi Ganduje, who delt with the former Emir of Kano, Alhaji Sanusi Lamido Sanusi, adding that if such a first class monarch could be dealt with by a state governor, how much more the few recalcitrant ones in the state.