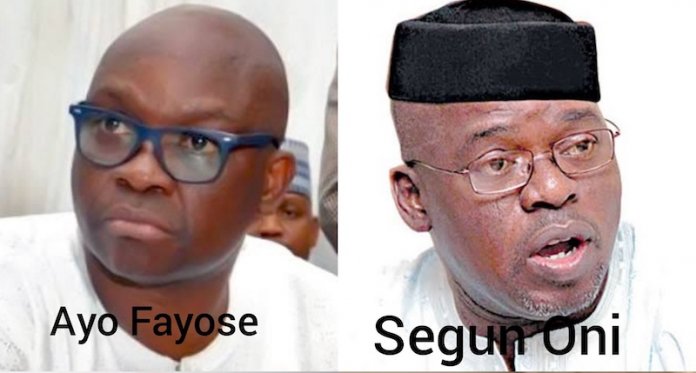 Two former governors of Ekiti State, Mr. Ayodele Fayose and Chief Segun Oni have agreed to work together thereby putting an end to 13 years of political hostility between them.

They took the decision to work together at the Ekiti State’s congress of the Peoples Democratic Party (PDP),

Despite the reunion of Fayose and Oni at the state congress yesterday, the crisis in Ekiti PDP degenerated with two factions of the party claiming to have produced members of the State Working Committee (SWC).

Fayose and Olujimi had been embroiled in battle for the control of Ekiti PDP since the chapter conducted its ward and local government congresses about six months ago.

After several years of political enmity, however, Fayose and Oni yesterday took advantage of the congress to reunite with an understanding to work hard to ensure victory for the PDP in the 2022 governorship poll in the state.

On the new understanding to work with Oni, Fayose declared that the ruling All Progressives Congress would be defeated easily in Ekiti with unity and discipline among members of the PDP.

Fayose said loyalty “is the best ingredient the party members as opposition must exhibit to be able to triumph over the Governor Kayode Fayemi-led APC,” saying the people of Ekiti had resentment for the ruling party.”

Fayose said: “I welcome Chief Segun Oni to Ekiti PDP. I knew APC would fail him when he left. I congratulate him for becoming born again today. Whoever comes back, you are welcome.

“APC operates secretly. PDP is the only democratic party. All that defected to APC in 2018 will regret their actions. But we are waiting for all of them. APC is losing their members on a daily basis, because people do not like them.

“We are even ready to work with the aggrieved in PDP. Today, this delegate congress will stand and there are no escape routes for anybody. Chief Segun Oni is here because he knew this is where the Ekiti PDP is.

“I have touched those I could. Oni touched those he could. So, the ball is in your court to be loyal. We are going to be equitable to all members.”

At a factional congress held at Petim Hotel, Ado Ekiti, Fayose warned the party members against indiscipline and disloyalty that were common features among politicians.

He said: “PDP was robbed in 2018. But 2022 is another year. Let me tell our members that loyalty pays over time. Let us continue to be loyal. There is no crack in Ekiti PDP. I will be surprised if Chief Segun Oni has not been here today.

“Let us find this chapter on discipline and truth. If we vote for you at the ward, council or state level and you misbehave, we will remove you. We have to be disciplined. Facing an incumbent needs discipline. Whoever wants to go is free to do so.

“Those with party positions, respect your leaders, because it will not be business as usual. We are prepared to support the new executive members for them to succeed. I am not looking for Senate or anything.”

In a veiled reference to his disagreement with Olujimi, Fayose said 5,000 Senators or members of the House of Representatives could not stand any governor or a former governor.

While addressing delegates yesterday, Oni said he felt elated to return to the PDP and realign with those he had worked with in the past and those he could trust when it comes to party politics.

Oni appealed to the party to eschew internal wrangling, promising that he would work with Fayose and other like-minded people to get rid of APC in the state.

He said: “There are people that have been lost and we are back. I thank the leader, Mr. Ayodele Fayose and other leaders. This party belongs to Nigerians and is ready to take its rightful place.

“We must encourage everybody to be here. We are starting our winning campaign from Ekiti. Very soon, we will get good news from Edo and Ondo. We will sweep across Nigeria. We will be able to bring about development.”

After the parallel congress held at Lotus Hotel in Ado Ekiti, Odebunmi said the task of repositioning Ekiti PDP had begun with his emergence.

Odebunmi lambasted Fayose for trying to forcefully take over the party’s structures in flagrant violation of the existing statute and extant laws guiding the PDP.

Odebunmi said: “It is the majority that own the party, not Fayose. Before you can hold a valid congress, INEC must be there. INEC was not present at the ward and local government congresses conducted by Fayose.

“Fayose is free to grandstand, but the final arbiter is the court of law and it will adjudicate on this crisis and tell us which faction is authentic,” he said.