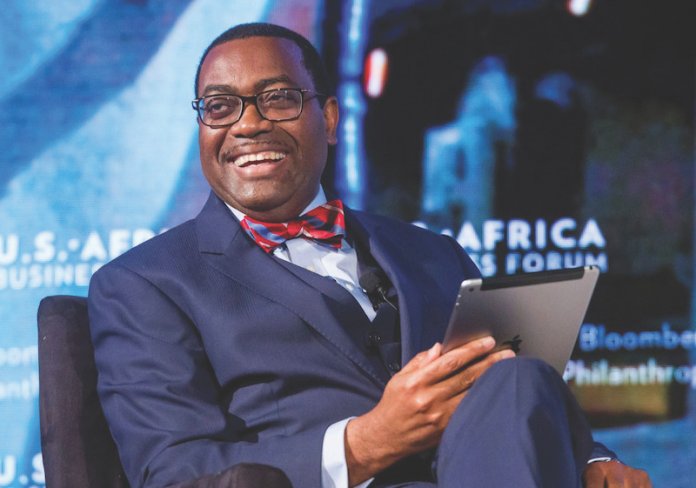 A quirky script to scupper the second tenure of the President of African Development Bank Group, Dr. Akinwumi Adesina, by the US Department of Treasury and a coterie of shadowy forces gets deservedly snookered, writes Louis Achi

It was indeed a remarkable and teachable moment on the first day of the AfDB’s annual general meetings in Abidjan, Côte d’Ivoire, mid last week, when Dr. Akinwumi Adesina spoke: “At this Annual Meetings, I offer myself to you, our Governors, for your consideration for election for a second term, as President.

“I do so, with humility. I do so with a strong sense of duty and commitment and a call to serve Africa and our Bank, selflessly, to the very best of my God-given abilities.”
Given the heft of forces aligned against his legitimate quest for second term as president of the African Development Bank Group (AfDB), especially as they were led by the US, the odds appeared insurmountable. But like many principle-governed quests, he beat the odds and was re-elected AfDB president for a second five-year tenure on Thursday, August 27, 2020, by the Board of Governors of the Bank.

The election result, announced by the Chairperson, Board of Governors of the Bank and Minister of National Planning of Côte d’Ivoire, Mrs. Niale Kaba, actually gave him, the first Nigerian to lead AfDB, a hundred per cent of votes of all regional and non-regional members of the Bank.

Her words: “I am delighted that the Board of Governors have re-elected Dr. Adesina for a second term in office as President. As shareholders, we strongly support the Bank and will give him all the necessary support to carry forward and implement his compelling vision for the Bank over the next five years.”

Following his deserved victory, an emotional Adesina had responded: “I am deeply grateful for the collective trust, strong confidence and support of our shareholders for electing me for a second term as President. It is yet another call for selfless service to Africa and the African Development Bank, to which I will passionately devote myself.
“The future beckons us for a more developed Africa and a much stronger and resilient African Development Bank Group. We will build on the strong foundations of success in the past five years, while further strengthening the institution, for greater effectiveness and impacts.”

The African Development Bank is Africa’s premier development finance institution, comprising 54 regional and 27 non-regional member countries.
A globally renowned development economist and a World Food Prize Laureate and Sunhak Peace Prize Laureate, Dr. Adesina who was first elected President of the Bank on May 28, 2015, has clearly distinguished himself in driving a bold agenda to reform the Bank and accelerate Africa’s development.

The AfDB president’s first term focused on the bold new agenda for the Bank Group based on five development priorities known as the High 5s: Light up and Power Africa; Feed Africa; Industrialise Africa; Integrate Africa; and Improve the Quality of Life for the People of Africa.

The Bank has maintained its AAA-ratings by all major global credit rating agencies for five years in a row. The Board of Governors of the Bank Group approved a 125% increase in the General Capital of the Bank, raising its capital from $93 billion to $208 billion, the largest in the history of the Bank.

The African Development Fund received a $7.6 billion pledge from donors, a 32% increase, for support to low income countries and fragile states. The Bank was ranked the 4th most transparent institution globally by Publish-What-You-Fund, bolstering its strong governance credentials for transparency and accountability.

Under Adesina’s leadership, the African Development Bank’s Board of Directors approved a $10 billion facility to support African countries to address the COVID-19 pandemic. The Bank also launched a $3 billion COVID-19 social bond on the global capital markets, the highest US dollar-denominated social bond ever in world history, which is listed on the London Stock Exchange, Luxembourg Stock Exchange and NASDAQ.

Adesina’s re-election for a second tenure was almost derailed a few months ago, when US authorities insisted he must be investigated for corruption claims made by whistleblowers.
Whistleblowers had accused him of 20 breaches of the bank’s code of conduct, including “unethical conduct, private gain, an impediment to efficiency, preferential treatment, and involvement in political activities”. But Adesina denied any wrongdoing and was also cleared of all allegations on multiple occasions.

On May 5, AFDB’s ethics committee headed by Takuji Yano, said in its report that Adesina was not guilty on all counts. Dissatisfied with the committee’s report, the US called for an independent investigation. But Nigerian authorities rose in his support. Through Nigeria’s Finance Minister Zainab Ahmed and former President Olusegun Obasanjo, the government rallied crucial support for him.
In separate letters in May, Obasanjo and Ahmed had urged AfDB to ignore calls for an independent investigation of Adesina by the US. Obasanjo’s letter which held that the call by the US for an independent investigation of Adesina “is outside of the rules, laws, procedures and governance systems of the bank,” was addressed to 13 former African leaders including former presidents of South Africa, Ghana, Malawi, Tanzanian, Republic of Benin, Liberia and Tunisia.

Ahmed’s letter was directed to the chairman of the Board of Governors of African Development Bank, Kaba Niale, urging her to follow laid down processes to protect and preserve the bank. At press time and with Adesina’s second term formally kicking off September 1, 48 hours hence, the rest is history.

The emerging consensus is that Adesina’s triumph over scurrilous, undeserved efforts to undermine his second term could only have been possible through transparent, demonstrable integrity and merit. This makes a powerful statement and speaks to African leaders that a new continent is indeed possible, when they yield to principle-governed leadership.