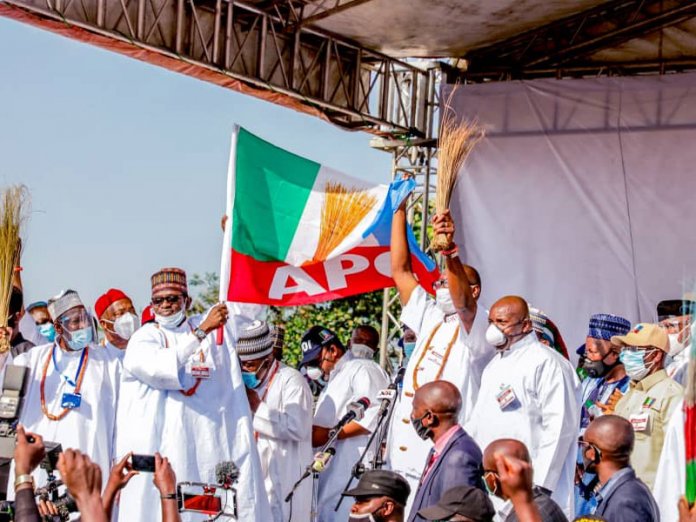 In an apparent show of strength, sculpted to intimidate the opposition, the leadership of the All Progressives Congress (APC), yesterday, paraded the crème of its members, both in government and in the party to kick off the governorship campaign of its candidate, Pastor Osagie Ize-Iyamu in Benin, the Edo State capital.

The list of top APC stalwarts, who graced the campaign kick-off was staggering, including but not limited to no fewer than 11 governors, Deputy Senate President, Ovie Omo-Agege, members of the national and state assemblies as well as ministers amongst other.

Impressed by the presence of the August visitors in the ancient city was the Oba of Benin, Ewuare II, who commended President Muhammadu Buhari for supporting the candidate of his party a day earlier, but was quick to reiterate the palace’s neutrality to politics.

This, notwithstanding, the leadership of the Peoples Democratic Party (PDP) has refused to be cowered by the mammoth turnout of APC supporters at the party’s campaign kick-off, saying it was determined to retain the state during the September 19 election.

Curiously, this is coming on the heels of some trade tackling between the Deputy Governor of the state, Philip Shaibu and former national chairman of the APC, Adams Oshiomhole, over assassination allegations against some PDP members.

With a colorful arena filled to capacity with party faithful and supporters, Ize-Iyamu had a good time acknowledging cheers from an overtly excited crowd, who livened the atmosphere with the songs and dance steps.

Conspicuously absent was Chief John Odige-Oyegun, a former National Chairman of APC; former governor of Edo State, Prof. Osarhieme Osunbor, and Minister of Health, Dr. Osagie Ehanire; all sons of Edo State and Chieftains of APC.
Speaking after the kick-off, Governor Ganduje said the main objective of coming to Edo State was to reclaim the state for the party, noting that the national campaign council had met several times and completed arrangements for APC’s successful victory.

Ganduje, who stated that the council was impressed with the performance of the election committee at the state level, noted that it was not in doubt that APC would win the election.

The Kano State Governor, while thanking the people of Edo for ensuring the return of the 14 lawmakers previously prevented, added that the next step would be to begin hamlet to hamlet campaign to ensure victory, saying what was left was the enabling environment for mobilisation of voters for the APC candidate and his SIMPLE agenda manifesto for the people of Edo.

“Our Council has met several times and we have completed arrangements for successful election and Isha Allah, we will win this election. Our own responsibility is to create enabling environment for the mobilisation of voters for the presentation of our candidate and his manifesto especially his SIMPLE agenda for the good people of Edo State.
“We are highly impressed with the state Council for the election. We are impressed with the performance of the election committee at the state level. We have seen elections and campaigns going on from hamlet to hamlet, from village to village, from town to town and within the metropolitan of Benin.

In his address, Buni disclosed that the ritual of presenting flags to party’s candidates had been conducted on Friday by the president, Muhammadu Buhari.

According to him, since that has been done, the ceremony of yesterday was to formally present the Edo State candidate, Pastor Ize-Iyamu.

“We are here to take back our mandate, to take back our state. Four years ago, we were here; you voted for APC and we have no doubt in our minds you are going to vote for APC and return our mandate back in Edo State,” he said
He, however, admonished party supporters to eschew violence throughout the campaign processes and in the election proper because history is already assured.

“We are here to win and not to fight. But we must ensure that every vote counts. With these few remarks, let me use this opportunity to present to you our in-coming governor of Edo State, Pastor Ize-Iyamu,” Buni declared.
Receiving the party flag, the Edo APC candidate, Pastor Osagie Ize-Iyamu thanked all the leaders of the party including those who could not grace the occasion for making the rally a fruitful one

“My job is just to thank all our National leaders for coming to identify with us. With the people (crowd) we are seeing today will anybody say we are in opposition? Can anybody say we will be intimidated? Who will win the election, APC!

“You know people ask me why did you come back to the APC and sing this song, there is something that makes me come into your presence, APC,” he sang.

Ize-Iyamu promised that from next week, the party would begin to move from local government to local government while encouraging party loyalists to go back to their units with the code-name “Operation Win”.

On his part, Oshiomhole, commended the APC governors for devoting time to attend the rally. He accused Governor Godwin Obaseki of describing Edo youths as miscreants, when his duty as a governor is to build the capacity of the youths and empower them.

He also accused the governor of closing down educational institutions in the state viz College of Education, Ekiadolor; State School of Nursing, College of Agriculture, Iguoriakhi and failing to build Tayo Akpata University of Education after the State House of Assembly had passed the Bill into law.

Oshiomhole, who repeatedly slammed Obaseki for deceiving the Vice President, Prof. Yemi Osinbajo to perform groundbreaking of an Industrial Park in the state, which is now overgrown with weeds, also accused him (Obaseki) of privatising the Specialist Hospital his (Oshiomhole’s) Administration built to a non Edo Consultant.

Meanwhile, the palace of the Oba of Benin, Omo N’ Oba N’Edo Uku Akpolokpolo, Oba Ewuare N’Ogidgan II, while thanking President Buhari for endorsing Osagie Ize-Iyamu, insisting that the Benin Palace remained neutral in the politics of the state.

The highly revered Oba stated this when he received the APC candidate and the governors elected on the platform of the party, who visited him in his Palace in Benin City, during the campaign kick-off.

Oba Ewuare, who along with his Palace chiefs, prayed and gave Ize-Iyamu the traditional blessing, said even though he was elated over the endorsement of the APC candidate by the President, he explained that the Palace of the Oba of Benin does not get involved in partisan politics.

He strongly advised that in order to avoid recurrent socio-political conflict that seems to regularly ravish the state, making the state a laughing stock to the rest of the country on how politicians manage their affairs, Edo political actors should eradicate the twin evil of political violence.

He prayed for peace during and after the state governorship election slated for September 19, advising all stakeholders to play by the rules.

Meanwhile, the Edo State Deputy Governor, Mr. Philip Shaibu, has raised the alarm over an assassination attempt on some notable members of the PDP in the state ahead of the September election.

He made the allegation while addressing journalists on the security situation of the state as it looks forward to the governorship election in few weeks from now.

Shaibu said it became imperative to notify the citizens of the state and the entire world of what the state is going through at the moment.

“It’s just to bring to the notice of Edo people and also to the entire country that we have intelligence report that some individuals are in Edo State courtesy of the former National Chairman of APC and the names of these individuals and their mode of entering are communicated to the security agencies. And they have the information.

“Their assignment is to come and assassinate some known individuals in the state. I hereby bring to the knowledge of the general public that these people are in town, we have communicated to the security agencies about their activities and why they are in town and also to use this medium to call on Mr. President to also call on the security agencies to do their work, because Edo is not going to be a theatre of war and for us, we will continue to appeal to our people not to look for trouble, not to disrupt any programme. We are law-abiding.

“We have the duty to protect lives and property and that we will continue to do but just to bring to the entire nation and Edo State of the intention of these individuals. The Police, the DSS have been communicated the names of these individuals,” he said.

But, reacting, Oshiomole said there was no truth in the allegations, describing it as the antics of a defeated person.

Oshiomole, who spoke through his aide, Victor Oshioke, said “There is no truth in that. Why will I want to kill anybody? I contested election twice and I did not kill anybody but have rather preached against violence.

“PDP and Philip know that they have not performed, so, they are reducing their campaign to Oshiomhole. You can see that even today at the rally I still spoke against violence. Philip is sure of defeat for him and his party. Nobody will kill him, but he and his party will surely be defeated on September 19th,” Oshiomole stated
In yet another statement by the Special Adviser to Edo State Governor on Media and Communication Strategy, Crusoe Osagie, which conflicted the position of the national leadership of the PDP, the Edo State government thanked President Muhammadu Buhari for not attending the APC campaign rally yesterday.

According to Osagie: “Once again, President Muhammadu Buhari reaffirmed his commitment to his administration’s fight against corruption by staying away from the public unveiling of the corruption-scarred gubernatorial candidate of the APC.

“Knowing the collateral damage such a gesture would have caused the anti-corruption war and its promoters, home and abroad, the President decided to stay away. The vice president, Prof. Yemi Osinbajo and several APC governors that were expected at the event, were also absent.