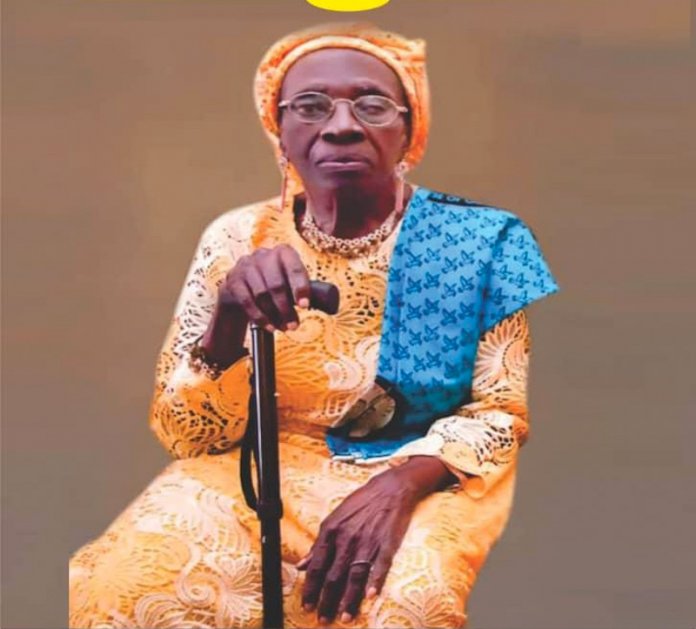 Where do I start about my mother, my friend, my confidante, my playmate, my soulmate, my pillar, my teacher, my everything? Start however I must.

Mama was my very first teacher in every sense. She trained as a teacher and was one of the first four Ikom ( now Ikom, Boki and Etung ) women to receive western education. I started following her to St. Martins Primary School, Ikom where she then taught long before I was eligible to start school. In my days your right hand had to touch your left ear over your head before you could qualify to be registered in school. By the time I could achieve this I already could read and write so I had a head start.

When I eventually could touch my left ear with my right hand I started school in January 1962. Mama took Ndifon Nkom Nku ( now Dr. Victor Nkom), late Richard Eno, late Aroma Brown and I to school to school on our first day and she was our first teacher. The others were children of her friends. I remember her holding a pair of tiny hands in each of her hands.

It was a remarkable day. Being the son of the class teacher naturally drew attention to me. This was in addition to my young age and physical size. The bell had announced break time and as usual with children our excitement was noisy as we ran out of the tedious classroom to the brief respite outside. I joined a group of my new classmates at play. Promptly an older boy from a senior class singled me out and hit me without reason. I cried to my mother who was at her desk in the classroom and reported what happened. She came out and mock smacked the boy after hearing him out. This gave me satisfaction which was short-lived as almost as soon as my mother left the scene another boy hit me. I immediately ran to her again. This time she studiously ignored me and my complaint. I left to rejoin the group at play deflated and disappointed. Not long the bell announced the end of the break. As I made my way back to the classroom yet another boy, this time one of my new classmates, hit me. I again went to my mother. This time she waited for the class to settle down before calling me out to the front and gave me six strokes of the cane on my buttocks.

It was the first time my mother would use the cane on me, and also the last time. She told me in front of the class that if in thirty short minutes three different people hit me, all three of them could not be the problem but me and warned that should that happen again my punishment would be more severe. It never happened again. I learnt never to be the odd one out, to fight my causes and take responsibility for myself and actions. I thenceforth avoided confrontations but did not run away from them. I was never again bullied. I sharpened my tongue as weapon in case physical strength failed me.

She was strict but fair, a disciplinarian who at the same time allowed children to express themselves within clearly defined moral boundaries.

She bore her pains with equanimity. She concealed her tears but shared her smiles. She trusted God absolutely, sacrificed and exerted herself to the very limits of her every endowment for her three sons, Kenneth, Victor and Roy. She was broken each time a relation’s child failed to choose education first as she was worried that her children could only be secure if those around them were also educated. She harangued and pushed, she argued and cried, begged and harassed for children, especially the girl-child to go to school. She was an activist for girl child education but lacked today’s tools for mass mobilization for her cause but deployed every available weapon in her time.

She badly wanted daughters through her sons to replace the one she lost whom she had already named Constance. She wanted to see her lost daughter in her son’s wives, grandchildren and other relatives, and looked for her in all of them. She saw her in some and did not in others.
Her beauty, poise and carriage were acknowledged everywhere. She was famously known as “ Miss” as female teachers were known and remained “ Ma Miss” until her death.

She was a torchbearer, a trailblazer who set the standards for her generation. She was as gorgeous as she was bold. She dared where her peers demurred. In 1960 she contested elections into the office of Chairman of Ikom County Council (now Ikom, Boki and Etung Local Governments) on the platform of the defunct NCNC. She won and became the first female chairman of a County Council ( now Local Government) in the then Eastern Region of Nigeria, and indeed the entire country from 1960 to 1963. She was only thirty years old but left towering and indelible legacies (see her biography).

Her faith in God was strong and because of her belief in the Almighty she was able to face her trials and tribulations with fortitude. I recall when Amaka and I were waiting for a child, we waited eleven years, she came into my room in my house in Ikom one early morning. She asked me if I was troubled by the situation. I said Amaka and I were not troubled as we believed that God would give us children in His due time. Her answer which did not surprise me was “stay with your wife, God gave her to you”. When she lost her daughter in 1963; an eye after an eye surgery in the 1990s, and Roy’s son, she took all in stride, traumatic as they were.

She brought us up in the Roman Catholic faith. She ensured that I was active in the choir and as a mass server. I recall when we Kenneth and I were much younger how she prepared us for Sunday Mass. After our bath we would still wash our feet before wearing our socks and shoes which were worn only on Sundays. We also wore our best clothes. We going to be before God so we had to be clean in body and spirit. Till date, I cannot enter a church without having a bath, not even my chapel at home. Upon her retirement she attended Mass every day until her ill health a few months ago.

Fortunately Reverend Fathers came to say Mass for her at home thenceforth. She received the sacrament to the end. Her former pupils who are now very senior Priests like Reverend Father Kris Owan stopped by to bless her. Reverend sisters surrounded her.To her that was all that mattered, that was life, a life of constant communion with God, a life of prayer, of service and sacrifice to humanity, and God.

She believed that one was not successful until others looked up to and depended on you. She believed that hard work and character should be the only path to the top. I recall how when Kenneth and I were in Primary School she bought us torch lights as there was no electricity then. She would wake both of us late in the night to read and tell her what we had read before going back to sleep.

She did not cut corners and hated pettiness. Her tongue was her major weapon which you employed generously to encourage, to comfort, to reassure and to correct. She was a lady in every way, a lady of grace, character and dignity.

She always walked tall, showed love and respect to all irrespective of age or status. Though petite in stature her presence was always overwhelming. She was blunt and spoke the truth always no matter whose ox was gored.

She was a woman of great courage, strength and versatility. I recall the civil war years. On the day Ikom was bombed in by Federal troops in August 1968 she took us to Effraya where we took refuge with her aunt Ma Ejen. Mama shuttled between Effraya to check on her children Kenneth, Roy who was under three years and I, and Ikom to be with her ailing mother. She made these trips on foot as she did when in 1969 she came from Calabar to check us and her mother, again on foot. She had transferred to the then South Eastern State civil service and was in the Ministry of Social Welfare in Calabar. There was no limit to any sacrifice Mama would make for her children and her mother especially, and humanity in general.

Less than three weeks before her death, Roy and his wife Amelia and Amaka and I had spent five days with her. Though ill she still had her faculties and wit totally intact. She remained humorous to the very end. She was ready to meet her Maker and she discussed her burial with us. She said we had celebrated her during her lifetime and had looked after well and that she wanted a quiet and simple burial.

A mother’s love is incomparable. It is like no other relationship. It is unconditional. That was Mama.

The measure of our lives is not the length of our years but the life in the years, it is not what we got but what we gave. God blessed her with length of years, life in everyone of those years and she gave her all to family, community, humanity and the Almighty in whose bosom she certainly has earned eternal rest.

De Mama, Achi Nentui, Achi Nyanga, yours was a life indeed, rich, full and worthy.It was a life of peace, peace of mind and soul, peace with people and environment, and a life of contentment. Tume oyiyi. Nwunene Mmam. Rest In Peace as you live in our hearts. Thank you for the memories and the lessons. Farewell Sweet Mother, farewell woman of virtue and substance, a pioneer, a legend. You are now of the ages as you close an age and a generation