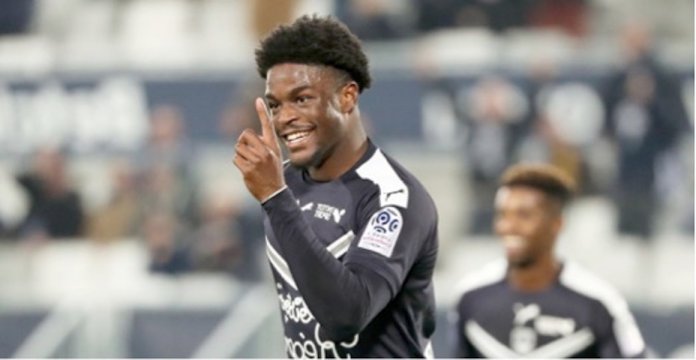 After a splendid first season with Bordeaux, Josh Maja may be on the move again ahead of next season and he will be at crossroads between a move to London Stadium or Ibrox Stadium. While Rangers Manager Steven Gerrard is hoping to make Josh Maja the third Nigerian at his disposal, West Ham David Moyes wants a reunion with the Super Eagles player after he once worked with him at Sunderland. It however, remains to be seen which club colours Maja would don next season as Manager Paulo Sousa is not ready to easily let go

West Ham United are set to rival Ranger for Bordeaux’s clinical young striker Josh Maja as David Moyes is eyeing a reunion with the striker.
Maja made his breakthrough at Sunderland under Moyes, making his debut in September 2016 and went on to score 17 goals in 49 senior appearances for Sunderland, having come through their academy before leaving the Stadium of Light in January 2019 to join French side Bordeaux.

Rangers have Maja on their radar of strikers to replace their star frontman Alfredo Morelos who is wanted by Lille, while Moyes is also weighing up a move for 21-year-old Maja as he aims to add firepower to his squad after keeping West Ham up.

Maja was Bordeaux’s joint-top scorer, netting eight times in just eight starts, with a further 16 appearances coming as a substitute, before the French season came to a premature end in March.

Maja is not pushing for a move but the financial impact of the Coronavirus pandemic may force Bordeaux to sell in order to raise funds.

Moyes is hoping to bring in some young homegrown talent to improve his squad this summer. Along with Maja and QPR’s Eberechi Eze, West Ham are also interested in Wolves midfielder Morgan Gibbs-White.

However, Rangers are reportedly interested in signing Maja. According to the Scottish Sun, the Scottish Premiership giants are set to open talks with Bordeaux over the potential transfer of the Nigerian international.

Rangers already have two Nigerians on their books with Leon Balogun having recently joined Joe Aribo at Ibrox Stadium from Brighton & Hove Albion.

Meanwhile, Maja is determined to show at French Ligue 1 club Bordeaux that he fully deserves to play internationally for Nigeria.

There was an element of luck to the 21-year-old’s first Super Eagles call-up to play Ukraine in September 2019 after several first-team players could not get a visa to enter Ukraine and Maja was a late replacement.

One of those who did not have such an issue was London-born Maja, who qualified for Nigeria through his parents.

He made his debut as a substitute in that game and is now determined to show he has the talent to play for the Super Eagles.

“Of course, playing in one of Europe’s top five leagues and performing well will improve my chances of international selection,” Maja told BBC Sport Africa.

“I’ve settled in well since I joined from English club Sunderland in January 2019.

“I’ve adapted to the playing style and culture of the league and I’m hoping to play more games in the future. It’s a great experience in a top league.

“The Nigerian team has always had quality, but now there are a lot of young talents playing, so the future is very bright for us.

“Hopefully the opportunity comes to play and help them make history.” The choice to play for Nigeria rather than try to represent England, the country of his birth, seems to have been an easy one.

“Playing on an international stage was a dream of mine. To represent my country and make my family proud,” he insisted.

“I’m familiar with my roots. I went to Nigeria a few times when I was young, and in the next few years I’ll be going again.”

The promising young striker mentions that Nigeria legend Jay-Jay Okocha was one of his idols growing up. “Okocha was a big icon and an example to many players, even outside of Nigeria,” says Maja.

“He had lots of qualities and performed well in the Premier League.”
Indeed, there seem to be some hints of this influence in Maja’s game.

He often drops from his position as a striker into the attacking midfield positions where Okocha once wowed fans, linking up play before getting on the end of moves to score.

Maja can also finish with either foot as well as his head and has the ability to pass accurately over any distance. He was philosophical about the cancellation of the French Ligue 1 due to the global Covid-19 pandemic.

“The most important thing is everyone’s health so if that is the decision they make then we must understand,” he added.

“It affects everyone. We would love to have continued the season and push for the top places, but if everyone’s health is at risk then it is not necessary.

“I think everyone would love to finish the season but it’s not in our hands.
The health and safety of everyone is the most important thing.”

Maja was born in Lewisham back in 1998 when Gus Poyet, Gianluca Vialli and Roberto di Matteo were still wearing the famous blue shirt, certainly ticks a lot of boxes for this new-look Chelsea side.

He is young, home-grown, and prodigiously talented.