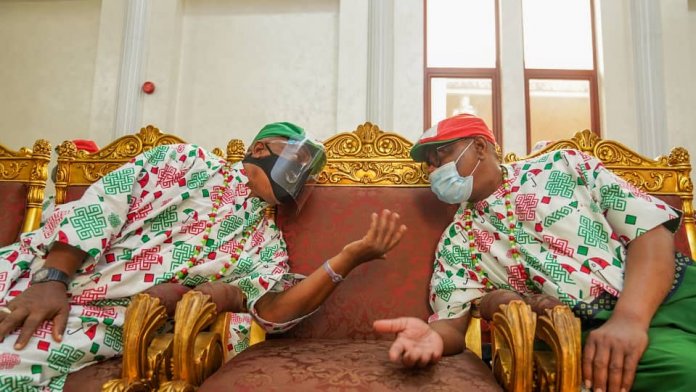 The governors yesterday gave the warning at the unveiling of the PDP governorship campaign at the Samuel Ogbemudia Stadium, Benin City, saying any attempt by the APC godfathers to rig the election would be resisted.

At Obaseki’s re-election campaign yesterday, Tambuwal counselled the people of Edo State to support the incumbent governor for the total and complete liberation of Edo State from the shackles of godfathers.

Tambuwal, the incumbent governor of Sokoto State and former Speaker of the House of Representatives, assured the Edo people that the prayer of the Sokoto people “is with them in the battle against godfatherism.

“You cannot eat your cake and still have it. You cannot be everywhere condemning godfatherism and you still want to be a godfather. In Nigeria, Edo State is a strategic state. We know where we are coming from and so no one can come to Edo to claim superiority.”

Tambuwal, therefore, disclosed that he gave Obaseki the hint on “how to demobilise godfathers. I advise that he should continue to hold unto God Almighty and not individuals. Persons can disappoint you, but God cannot.

“That was what we did in Sokoto State and it worked. Today, we have demobilised all the forces both within and from afar. Votes must count,” Tambuwal said.

He urged the Chairman of the Independent National Electoral Commission (INEC), Prof. Mahmood Yakubu to build on the legacies of his predecessor, Prof. Attahiru Jega who ensured one man one vote during his tenure in office.

He also urged President Muhammadu Buhari to rise against election manipulation and ensure that one man, one vote gained precedence in future elections.

He said: “Even if his anti-corruption fight has been challenging and failing, he should not fail to deliver a free, fair and credible election in Edo and to Nigerians in 2023.”

Also, at the campaign, Wike warned that Edo State would be a no go area for the rigging machine of APC, saying any attempt to do so will be resisted.

He said: “Nobody can rig this Edo election. No one man can decide what happens in Edo. Today ends godfatherism in the state.”

Wike explained that the only thing that keeps APC going in the country today “is that they believe in rigging but this very one, it will be very difficult.”

He urged the Edo youths “to rise up and defend their votes and should not allow anyone, whether security agencies or INEC personnel rig the forthcoming election.

“Vote and protest your votes. Nothing will happen to anybody because I believe Obaseki has done well and the election is already won,” the Rivers governor said.

He also told them “not to be deceived a second time by those who wear safari in Abuja, but come to Edo wearing khaki, campaigning for the same person they branded thief, cultists and fake pastor four years ago.

“I don’t want to talk about the candidate because APC has no candidate. The only thing they know is rigging but we will not give them that opportunity come September 19. So come out and vote for Obaseki-Shaibu.

“Obaseki is one of the best things that has happened to PDP. He has done well by resisting godfathers. Now, there is no hope for APC as Edo is now a PDP State. We will not allow them to take Edo”, Wike declared.

Okowa, governor of Delta State, said: “I am a happy man because PDP is now well established in the South-south region,” noting that the Edo election “must be credible and that the Edo people must rise against rigging.

Besides, the Delta governor expressed joy that without fighting any electoral battle, the PDP returned to power in Edo State after 12 years.

At the forum, the Bauchi governor said Obaseki had proved his mettle, thus asking the Edo people “not to allow mediocre to take over again. You must not sit and relax because politics is war for freedom and liberty.”

Other governors, who attended Obaseki’s campaign, are Mr. Seyi Makinde of Oyo State and Senator Duoye Diri of Bayelsa State. They both urged the Edo people to support the good work Obaseki had started in the state.

Before presenting the party’s flag to Obaseki, PDP National Chairman, Mr. Uche Secondus described Nigeria as a nation at a crossroads, thereby appealing to the president not to be distracted by APC gimmicks.

He also urged the president to face governance by providing security for lives and property and conducting free and fair elections for Nigerian since all other sectors have failed even as he pointed out that people are being killed and there is hunger everywhere.

“The Edo election is going to be a litmus test. Whether free and fair election will take place is the first step of the presidency. All eyes are focusing on the Edo election and whether he will give Nigeria a free, fair and equitable election.”

Receiving the party’s flag, Obaseki promised to continue the transformation of Edo, saying the flag the party gave him “is a further mandate to say you like what we have done, go back and continue what you are doing.

He said a programme, “Make Edo Great Again (MEGA) will be rolled out with a view to restore the hope and future of our people.”

Meanwhile, there was a clash between the youths and supporters of Obaseki at the entrance gate of the palace before security personnel dispersed them.

Before the unveiling of Obaseki’s re-election campaign in Benin City, the clash, THISDAY reliably gathered, occurred immediately after the PDP governors, who paid a courtesy visit to the Oba of Benin, left the palace.

The warring youth were said to have engaged in singing songs for and against Obaseki at the exit gate of the palace when tempers went beyond control.

The clash eventually resulted in the use of dangerous weapons including firearms, cutlasses and others and in the process, several persons were reportedly injured while others scampered to safety, even as many cars parked at the front of the palace were damaged.

In response to the clash, the‎ Edo State Government condemned the attack on its guests, notably governors and other Very Important Personalities (VIPs), at the Oba’s Palace in Benin City.

In a statement yesterday, the state government said the APC and its candidate, Osagie Ize-Iyamu and the sacked National Chairman of the APC, Comrade Adams Oshiomhole sponsored the thugs that caused the mayhem.

It said: “We are appalled by the deployment of thugs to the sacred grounds of the Oba Palace by the APC, Ize-Iyamu and Oshiomhole to harass guests who are in the state for the flag-off of Governor Obaseki’s campaign and had visited the palace to pay obeisance to His Royal Majesty, Omo N’Oba N’Edo Uku Akpolokpolo, Oba Ewuare II, the Oba of Benin.

“While we respect the boundaries of politics as it relates to the Palace, it is reprehensible that the APC, its candidate and their enablers would sponsor thugs to desecrate the palace, which is a clear case of desperation to score cheap points.

“This conduct is not a trait of Edo people and is condemned in the strongest possible terms, as we are courteous and welcoming to guests. It is obvious that these persons were mobilised for this task by those who have no regard for the palace nor want the progress and development of the state.”