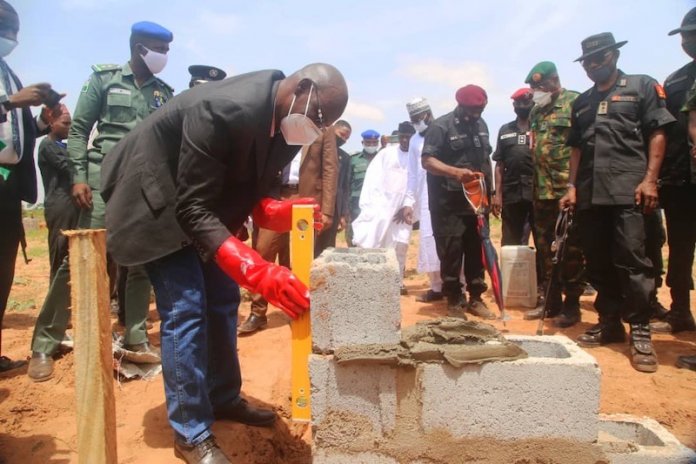 Igbawase Ukumba writes that states of the North-central Zone would soon experience peace and security in the country with the movement of the Nigeria Army Special Forces Command to Doma in Nasarawa State to checkmate the menace of cattle rustling, banditry, kidnapping, farmers/herders clashes and other forms of criminalities

The North-central geo-political zone of the country, whose major occupation is farming; with good climatic condition, in which over 80 per cent of the population engages in one agricultural activities or the other, had witnessed competition for scarce land between the farmers and herders.

Hitherto, the situation has made the zone vulnerable to many security challenges ranging from communal crisis, clashes between herdsmen and farmers, kidnapping, banditry, cattle rustling, among other socio-economic security challenges. This, no doubt, has continued to threaten the fragile peace and security in the respective states of Nasarawa, Benue, Plateau, Kogi, Niger and the Federal Capital Territory (Abuja) with attendant effects on the security of the zone.

Consequently, it was imperative to come up with holistic measures to address those plethora security challenges in order to avert the likely breakdown of the seemingly peaceful and harmonious co-existence among diverse ethnic nationalities, as well as maintenance of law and order in the society.

It was against this background that Governor Abdulahi Sule led some top military brass of the country to lay a foundation for the construction of a headquarters for the Nigeria Army Special Forces Command at Doma in Nasarawa State to checkmate the menace of cattle rustling, banditry, kidnapping, farmers/herders clashes and other forms of criminalities in the zone.

Speaking earlier before he laid foundation for the construction of the Special Forces Headquarters at Doma, Governor Sule said in addressing the aformentioned menace bedeviling the North-central states, the federal government had set-up different military operations in the zone. These include: a Special Joint Military Operations which was codenamed Ayem Akpatuma or Cat Race with the operation headquarters in Nasarawa State to take care of the entire North-central zone.

Other military operations set up in the zone according to Sule were “Operation Whirl Stroke Special Force, with its Command Headquarters in Makurdi, Benue State and operational bases in the states to address farmers herders conflict in the zone. Establishment of 123 Special Force Battalion in Doma. The establishment of two Military Super Camps at Mararaban-Udege in Nasarawa Local Government and Kanyehu in Toto Local Government Areas of the state.”

In furtherance to the Nasarawa State government’s commitment to complement the efforts of Nigerian Army in the fight against crime and criminality in the state, Sule said: “The state government has constructed four bedroom flat and boys’ quarters as commander’s residence, as well as five bedroom semi-detached for other senior officers. This is in addition to the provision of three brand new Toyota Hilux Pick-up Vans; brand new motorcycles; solar-powered boreholes; 100 eight-spring mattresses; generating sets, as well as provision of perimeter excavation round the two camps.”

In his speech, Sule appreciated the Chief of Army Staff for his doggedness and resilience in fighting insurgency in the North-east; farmers/herders conflict in the North-central and kidnapping/banditry in the North-west.

To this end, THISDAY findings showed that as part of measures to combat crime and criminality, the Nasarawa State government had signed the Kidnapping Act Prohibition Law; Community Volunteer Guard (Vigilante); Executive Order for the Implementation of the Child Right Law of Nasarawa State and Street Begging. All these measures were aimed at ensuring security and peaceful co-existence with the view to providing enabling environment for socio-economic activities to thrive.

Speaking at the epoch making event, Chief of Army Staff, Lt Gen Yusuf Buratai, raised the alarm that the terrorist threat ravaging some parts of the country was shifting its base to the North-central part of Nigeria.
Buratai, who spoke through the Chief of Plan and Policy, Lt Gen Lamidi Adeosun, however said constant evolving nature of threats in the country underscores the need for Special Forces troops with requisite skills to operate under all weather, conditions and terrains to be established if the threats are to be nibbled.

To this end, the Chief of Army Staff said: “The establishment of 4 Special Forces Command to be domiciled in Doma, but covering the entire country operationally. Since I assumed command as the Chief of Army Staff, I have always viewed that the Nigerian Army required force enablers and multipliers, and not just brute numbers, to effectively combat the plethora of security threats being faced by Nigeria.

“This is why I, among other actions, pushed for the establishment of Special Forces units and formations that are motivated, empowered and resourced to go where others dare not to go and do what others thought was impossible.”

He was optimistic that with the Special Forces’ commendable performance in the field and having set up a Training School for the Special Forces, it was only natural for the Nigerian Army to establish a Formation Headquarters to administer, guide and deploy Special Forces assets wherever the need may arise.

“Although the four Special Forces Command was statutorily established on 26 March 2020, the force has been functioning in different Theatres of Command in Nigeria with excellent results. Today, we are marking the beginning of its physical establishment upon this ground,” he said.

Buratai continued by restating the commitment of the Nigerian Army to the peace and security Nigeria.

“We are all aware of the danger of dropping our guard, particularly during this pandemic period where the standards of safety and personal security have been significantly raised. I therefore urge everyone, not only to keep safe, but also to take the message of individual and collective safety, to our respective domains. I equally want to use this opportunity to plead for your cooperation and understanding during this period of lockdown across the country, as the Nigerian Army assists civil authority to maintain law and order,” the Chief of Army Staff added.
Of equal importance was the need for all people to realise that they were all stakeholders in the onerous task of national security and nation-building, hence Buratai urged all who represented at the event to offer credible intelligence to the security agencies and Armed Forces so that security operatives’ operations could be more effective and impactful.

“On our part, we will not rest on our oars but will continually carry out our defence and security roles in a professional manner, and with the cooperation of other services, paramilitary organisations, traditional institutions, government, civil society, non-governmental organisations and the entire citizens of Nigeria,” he said.

For the Commander 4 Special Forces Command, Major General MG Ali, the evolution of the command was indeed historic as it was the first of its kind in Africa, which was established on 26 March, 2020 and tasked with the responsibility of tackling unfolding threats of insurgency, terrorism and other security threats to the country both internally and externally desirous of Special Forces employment.

The command with a division and corps status of four Combat Brigades, four support Brigades and an Integrated Logistics Command according to Ali, “the command was graciously approved and established by the Chief of Army Staff in his wisdom to tame the changing security threats in the country.

“The choice of Nasarawa State and indeed Doma for this great fate is key due to its centrality for quick response to the nooks and crannies of this country. Doma also has the ideal environment for Special Forces training with multiple linkages to most areas with unfolding security threats in the country.”

The 4 Special Forces Commander reiterated that the establishment of the command in Nasarawa State has not only been received with open arms by the leaders and people of Nasarawa state, but taken as a personal project by Governor Sule, his Chiefs and the good people of Nasarawa.

“I believe this act of generosity by Sule and the good people of Nasarawa in supporting the Chief of Army Staff’s proactive acts will implore great minds to do same if the blowing wind of insurgency and terrorism facing is to be nipped,” General Ali maintained.

The people of Doma were filled with appreciation for the choice of their Local Government Area as site for the very important project. Executive chairman of the Local Government, Hon Rabo Sani, gave the appreciation on behalf of the Doma people, in his welcome address on the occasion of the foundation laying/flag-off of the construction of the Special Forces Command Headquarters, Doma.

According to Rabo, “the siting of the Special Forces Command Headquarters in Doma would help in addressing security challenges in this part of the country.”