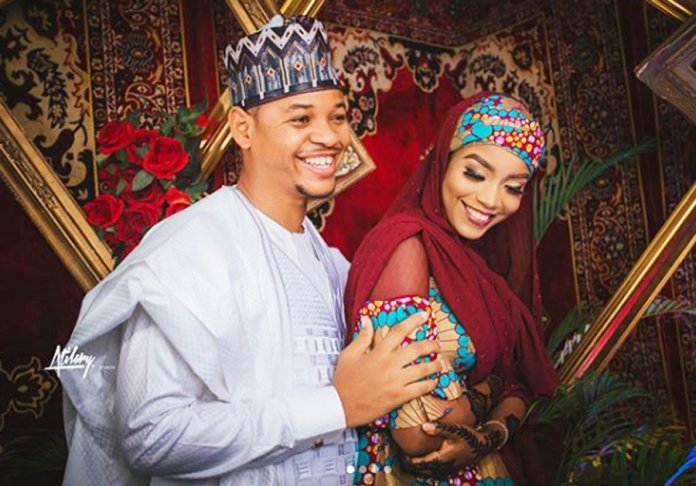 Comedian, Obinna Simon, popularly known as MC Tagwaye, joined the league of married men last Saturday following his wedding to his sweetheart, Hauwa Uwais. The beautiful bride is the daughter of the Special Adviser to Presidential Muhammadu Buhari on Social Investments, Maryam Uwais. The groom, who is known for mimicking President Muhammadu Buhari, was overwhelmed with joy and shortly after the ceremony took to social media to share pictures of himself and his heartthrob.

The pictures which captured the newly-wed couple dressed in native and English wears, was captioned with romantic words. “If I am doing it again….. It has to be you my Kulu no one else,” he wrote in one of the posts. “It’s a good night, we continue from where we stopped tomorrow. For those asking, we’re officially joined married today, he added.” MC Tagwaye’s ability to mimic president Buhari had endeared him to several Nigerians; this is coupled with the fact that he has a resemblance to President Buhari.

The comedian who disclosed that he was surprised at how many people celebrated their union on social media in another post wrote: “The best honey moon in 2020, for a whole country to keep entertaining myself and her Excellency on social media for two days now none stop, that’s lovely; thank you Nigerians.” The bride’s mother, Maryam Uwais, expressed delight in a photograph-laden statement on her Instagram page. “So my daughter, Hauwa, got married today. And I got me a brand new son, MC Tagwaye. Fun, love, and laughter shall follow them all the days of their life. Please pray for a blessed and fulfilling union for this brand new couple. Marriage is never easy. But with God in their lives, and prayers of well-meaning people, it will be,” the presidential aide wrote.

MC Tagwaye hit stardom after he mimicked Buhari reacting to criticisms in a clip over which he was later dubbed the president’s doppelganger for accurately imitating his mannerism.

An indigene of Anambra State, born and raised in Katsina State alongside his twin brother, MC Tagwaye managed to achieve striking resemblance with the President while exhibiting his craft.

President Buhari isn’t the first person he mimicked. Tagwaye had told BBC: “What made this special was that I always tried to imitate such personalities with near 100 per cent accuracy. Buhari’s character entered me so well. I found it difficult to return to my own own self. Even when I finally met the President, he was always careful with his speech so I wouldn’t pick something from him. Anybody that likes Buhari likes me, if they hate him, they hate me as well.”

MC Tagwaye once revealed that the VIP treatment he gets when he attends any function is not only funny but also overwhelming. However, the comedian’s look has gotten him some bad days also. He has had to deal with lots of negative comments from friends who criticize him for mimicking the President, especially those who don’t like the President. Narrating his experience when he first met President Buhari, MC Tagwaye said it was more of a shock than excitement for him.

He said he met the President in Katsina at the Economic Summit in 2016 when he asked to be photographed with him. “Buhari is one of the simplest and down-to-earth individuals. When I was approaching him where SSS was about to stop me but he told them to let me. Before I got to where he was, he had stood up already to have a photograph with me,” the comedian said.