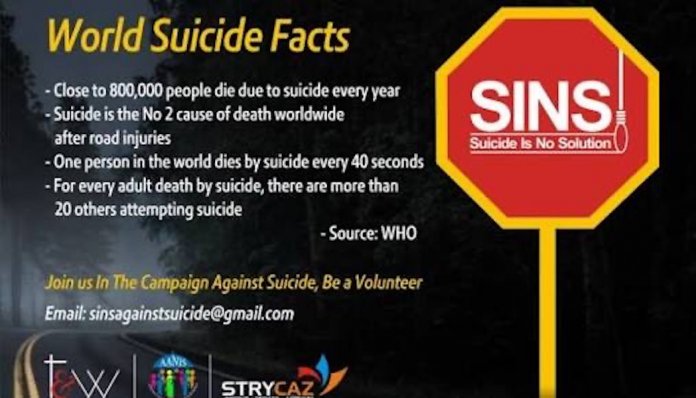 Chiemelie Ezeobi writes that given the alarming figure of suicide cases in Nigeria, Suicide Is No Solution, an advocacy-based group, is bent on de-marketing the malaise to make it lose its appeal

Alarmed at the increasing spate of suicide in Nigeria, Suicide Is No Solution (SINS), an advocacy-based non-profit organisation, is bent on de-marketing the mental health illness. According to them, making suicide lose its appeal is one way to reduce to figures from rising.

In initiating the campaign to dissuade Nigerians from seeing the suicide as a solution to their problems, they have partnered a team of mental health practitioners, religious leaders, social workers and volunteers.

With Nigeria as number one in West Africa, seventh in Africa and 15th in the world, their fears are understandable.

Out to tackle this mental health challenge, SINS Media Lead, Babatunde Muraina, said the group has launched series of advocacy activities, interactive events and counseling support to highlight the increasing spate of deaths by suicide amongst Nigerians.

According to him, they are providing professional support to would be victims with a view to dissuade them from committing suicide. He said a team of mental health practitioners, religious leaders, social workers and volunteers have joined hands to support the cause in order to achieve its objective.

SINS Project Lead, Mrs. Idy Toye-Arulogun said with one person in the world dying by suicide every 40 seconds and Nigeria ranking 15th on the global suicide index; “there was a strong need to intensify the campaign against it.

“The SINS campaign encompasses multimedia communication messages for exposure in both traditional and new media platforms, a helpline and a back end professional counselling support structure to engage members of the public going through distress and depression.

“The group is optimistic that the SINS intervention will contribute to the mental well being of Nigerians and ultimately the reduction of deaths by suicide through various engagements”.

SINS also urged the government to make issues of mental health a priority, advocating for dedicated hotlines for people having suicidal thoughts or going through depression to call and get expert help.

Although there are other methodologies of suicide, taking poison seems to be more in vogue, with the users opting for insecticide. This anomaly is one thing the companies producing it have tirelessly worked on stopping, with their campaign being focused on the fact that although insecticide/miticide controls foliar and soil borne pests, and is at the same time, a restricted pesticide, it is still not for human consumption.

With about 800,000 people dying from suicide yearly, this continually brings to the fore the need to tackle depression. Although there are no well-known documented data of deaths caused by suicide, the anomaly is rising in intensity across the country, as statistics show that Nigeria has the seventh highest suicide mortality rate in Africa and number one in West Africa. Globally, this makes Nigeria the country with the world’s 15th highest suicide rate.

Undoubtedly, suicide cases continue to pose a big problem to both the Nigerian government and international bodies. Despite the fact that the two major religions in the country – Christianity and Islam – abhor and preach against the act of ending one’s own life, it continues to happen. Aside from religion, suicide is also a criminal offence under Nigerian laws. And even the traditions and cultures of most people in Nigeria are against it.

Yet, suicide is on the increase in the country, with frequent reports of people hanging themselves, jumping into the lagoon, taking poisonous substances to end their lives, often out of depression.

Over 800,000 people die from suicide around the world every year. Perhaps more shocking is the World Health Organisation (WHO) statistics which states that suicide is the second leading cause of death among 15-29-year olds.

According to the National Alliance on Mental Illness, 54 per cent of people who die from suicide had no known mental health condition, neither were diagnosed nor open about it.

The alliance also notes that other risk factors that cause suicide can stem from trauma or abuse, isolation, stress, access to firearms or substance abuse.

A breakdown of the statistics from WHO stating that 800,000 people die from suicide around the world every year, shows that one person die every 40 seconds and for every suicide, 20 plus others have attempted suicide. The organisation also states that 79 per cent of suicide victims live in low or middle-income countries, which means that 21 per cent live in high-income countries.

On the way forward, medical experts often advocate that one seeks help as soon as possible when one is depressed. According to one Dr Chidi Akano, this is because the common risk factors that lead to suicide include depression, severe anxiety, acute stress due to any reason, severe adjustment reaction, drug and alcohol abuse, side effect of certain prescribed medication – like certain anti- depressants – psychotic illnesses – for example, schizophrenia, other mental illness like mania and personality disorders – previous suicide attempt and family history of suicide, cultural and religious beliefs and lack of supportive social cycle.

According to WHO, communities can play an important role in suicide prevention, support those who previously made an attempt to take their lives, comfort those who have lost someone to suicide, as well as help fight the stigma associated with suicide.

Also, many experts have stressed on the need for Nigerians to be educated on mental health, as this will demystify the myths about mental illness. But the groundswell of opinion among experts is that the respective communities and government need to do a lot more to reduce the prevalence of suicide. 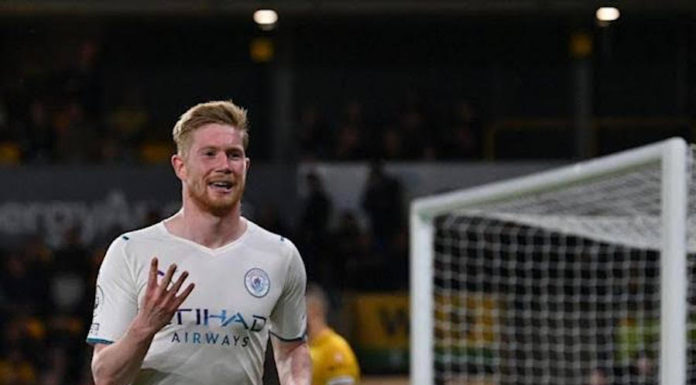