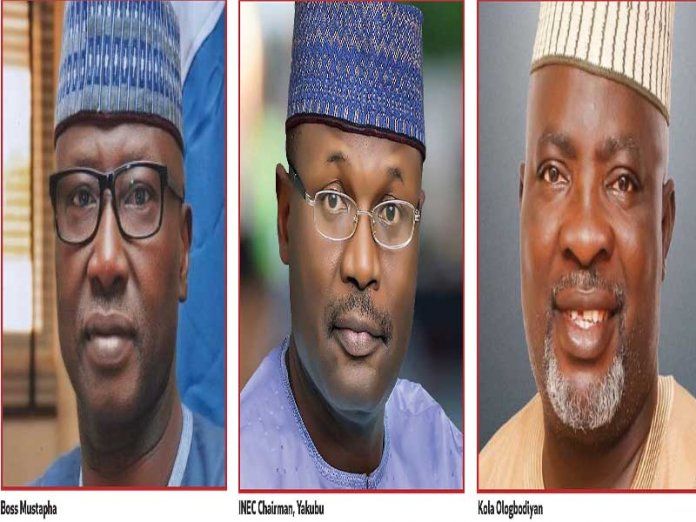 Since March 25, 2020 when President Mohammadu Buhari authorised the lockdown of Lagos and Ogun states, as well as the Federal Capital Territory, mysterious infernos have engulfed three prominent government agencies. In quick succession, fire have gutted the Treasury Building, the Corporate Affairs Commission (CAC) and the latest is the Independent National Electoral Commission (INEC).

One interesting mystery of these fire is their sequence. They occured almost at one week interval.

Nigerians were shocked to know that days after the CAC and the Treasury House in Abuja were gutted by fire, a section of the Independent National Electoral Commission (INEC) headquarters in Maitama-Abuja, was gutted by fire.

This was one fire too much. The inferno at INEC brought public outcry. The commission’s officials have debunked insinuations that no sensitive electoral materials were destroyed during the inferno.

The main place affected by the fire was the Media Centre of the commission and the Election and Party Monitoring (EPM) office, according to them.

It was gathered that the fire did not do much danger before it was put under control by men of the Federal Capital Territory Fire Service. The fire started around 11 am in the morning.

The fire incident was confirmed by INEC National Commissioner and Chairman of its Information and Voter Education Committee, Festus Okoye and the Director, Voter Education and Publicity, Oluwole Uzzi.

The INEC Director said that only parts of the Election Party Monitoring (EPM) was affected as men of the Fire Service on ground were able to put the fire under control.

He said that INEC had in a circular directed all its offices to be on alert and vigilant against fire outbreak.

At the scene of the incident burnt leftover of files, furnture and air conditioner units littered the ground every where.

The four storey building housing the offices of the INEC chairman, national commissioners and some directors was not affected by the fire.

INEC National Commissioner, Festus Okoye in a statement confirming the fire incident at the commission’s office, said, “At 11.30 am today. 17, April 2020, a fire outbreak occurred at a section of the building housing the Election and Party Monitoring Depanment and the Media Centre.

“The building is an annex, detached from the main building of the Independent National Electoral Commission‘s headquarters.

“Fire fighters attached to the Commission swiftly responded to contain the inferno and they were later joined by their colleagues from the Federal Fire Service headquarters in the Federal Capital Territory (FCF). The fire was extinguished within a short period of time and did not cause any substantial damage to the building.

“Apart from some furniture and equipment, nothing sensitive was destroyed. Reports of party primaries and conventions are intact. The campaign fmance database is also not affected. The incident will therefore not affect the administrative or technical operations of the Commission in any way. Meanwhile, investigation into the cause(s) of the the incident has commenced”.

Before the fire at INEC, on April 8, there was a fire had engulfed the Treasury House, which is the headquarters of the Office of the Accountant-General of the Federation.The cause of the fire, which started about 10 am, is yet to be known.

It was gathered that as soon as the incident started, men of the Federal Fire Service were alerted to assist in putting out the fire.

They were later joined by officials of the National Emergency Management Agency, the Nigeria Police and the Abuja Environmental Protection Board.
The FCT Police Commissioner, Bala Ciroma, who briefed newsmen at the scene of the incident, said an investigation into the cause of the fire had commenced.

He advised motorists to use alternative routes into the area, noting that the Ladoke Akintola Boulevard location of the Treasury House would be cordoned off during the investigation into the cause of the fire.
Ciroma, who disclosed that parts of the building had been damaged by the incident, said the fire was successfully put out without casualties.

The Senate Committee chairman on Finance, Senator Solomon Olamilekan confirmed that no sensitive document was destroyed during the fire outbreak

The fire, according to sources, occurred on Wednesday morning at the six-storey building located in Maitama, Abuja.

The building is located on the same street that houses other top government offices like the National Youth Service Corps, the Nigeria Incentives Risk-Based Sharing for Agricultural Lending and the Nigeria Export Promotion Commission among others.

The Registrar-General of the CAC, Alhaji Garba Abubakar, confirmed the fire incident, but said that there was no loss of document or lives during the fire outbreak.

Abubakar said that as soon as the fire was noticed, men of the Federal Fire Service were quickly mobilised to put it out.

He said, “There was a minor fire incident at the CAC which was quickly extinguished by the men of the fire service.

Due to the frequency of these fire outbreaks that the main opposition political party in the country, the Peoples Democratic Party (PDP) called for a probe. PDP said that it was alarmed over the recent spate of fire outbreaks at key Federal Government agencies and departments, particularly in Abuja, the nation’s capital.

The party expressed shock over the disquieting fire disaster at the head office of the Independent National Electoral Commission (INEC) in Abuja, in which valuable equipment and documents related to electoral and political party monitoring were destroyed.

The PDP in a statement by the National Publicity Secretary, Kola Ologbondiyan described the situation as unsettling, recalling that, the head quarters of the Office of the Accountant General of the Federation in Abuja was gutted by fire, followed by another inferno at the head office of the Corporate Affairs Commission (CAC).

The statement averred, “Our party is deeply worried and hopes that this spate of fire outbreaks is not a coordinated design by sinister elements against demands for due process and accountability in our country, as already being insinuated in the public space.”

The PDP, therefore, restated its demand for a forensic investigation into the fire outbreaks in the Office of the Accountant General of the Federation, the CAC and INEC, as the spate of occurrence has become alarming.

The PDP noted that the nation can no longer afford any more fire incident in her key institutions as such will be distressing to the polity, which is already under pressure occasioned by dwindling economy and the impact of the COVID-19 pandemic.

The PDP, therefore, restated its demand for a forensic investigation into the fire outbreaks in the Office of the Accountant General of the Federation, the CAC and INEC, as the spate of occurrence has become alarming. Furthermore, the party strongly charged the Federal Government to immediately ensure necessary precautionary and security measures to safeguard all Ministries, Departments and Agencies (MDAs) to avert future ugly incidences