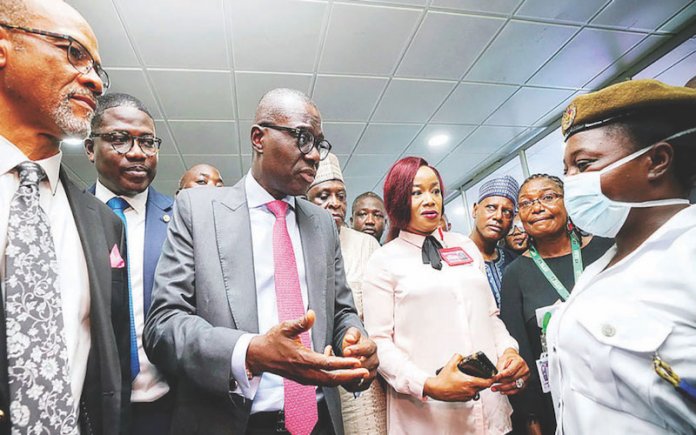 While more cases of COVID-19 are still been recorded in Lagos State, the successful treatment of 23 persons from the Infectious Disease Centre in Yaba has given hope to many that the virus can be defeated. Martins Ifijeh takes a look at what the Governor Babajide Sanwo-Olu led government is doing right that has resulted in the large discharge patients

Ever wondered how much of a death sentence COVID-19 has become in otherwise developed countries where casualties are recorded in thousands and several hundreds every day? Ever imagined how COVID-19 patients of those nations feel when they are diagnosed of the infection and what goes through their minds knowing they may not come out of it alive?

Well, for Lagos State, the epicenter of the disease outbreak in Nigeria, you should wonder no further. There is a magic wand at the Infectious Disease Centre, Yaba which ensures confirmed cases are discharged hale and hearty after their isolation and treatment journey.
At the last count, 23 former COVID-19 patients isolated and managed at the infectious disease centre in Lagos have gone home to their families and communities after their viral loads came back negative, which means the coronavirus infection is no longer in their body system.

To be clear, Lagos currently has 109 cases of the virus from the total 210 confirmed cases in Nigeria, and so far, 24 of the Lagos cases have come out with an outcome, that is 23 discharged patients and one death, while 85 confirmed cases are still being managed at the isolation centre by a team of healthcare workers under the supervision of the Lagos State and federal government through the their various ministries of health, and the Nigeria Centre for Disease Control (NCDC).

While pundits say the preliminary success recorded in the management of the disease so far is as a result of leadership by the Governor, Babajide Sanwo-Olu, other schools of thought believed it is a combination of factors, which include expertise of healthcare workers, early tracing of positive cases by the NCDC, their quick isolation and management, the experience of the commissioner for health who is actually a biosecurity expert and a virologist, and the cooperation of the patients and their family members.

Sanwo-Olu
Although the road to victory is still miles away, especially if epidemic timelines are to go by, one person who so far has shown leadership since the COVID-19 outbreak started in Nigeria on February 27 is Governor Sanwo-Olu, who upon confirmation of a case in the state, quickly assumed the position of Incident Commander on COVID-19 Response, pushing himself to the frontline.

Acknowledging that the most important intervention against epidemics is dissemination of information, he, along with the ministry of health commenced daily briefing, daily informing the 23 million Lagos residents on situation of things, what to do to prevent the disease, and how exact protocol to follow should residents presume they may have been infected; a move that both the NCDC and the Federal Ministry of Health, as well as other states have not done till date.

While initially reports suggest the state’s isolation centres were not 100 per cent habitable for COVID-19 patients, indications show they were even better equipment than Abuja and most other states, such that the Chief of Staff to the President, Abba Kyari had to request for an evacuation from the isolation centre in Abuja, the seat of power, to Lagos, apparently due to the difference in professional handling from the state; a move that could only be traced to leadership by the governor.

What is the governor doing right that other states, including Abuja must emulate if the country must jointly win the war against the dreaded pandemic? On specifics, information dissemination, assembling best hands in the health sector, ensuring every sector, from finance, to education to security, all join forces together to defeat the pandemic.

Healthcare workers
All discharged patients who were willing to speak to the media were unanimous in one thing; that their lives were saved because of the professionalism of health workers. To be clear, they said the health workers do not only give them drugs, but shares informations on roles of each drug, why they must take them, and in general gave them hope.
Governor Sanwo-Olu at every point of discharge of patients often first acknowledge the role played by the health workers, who are putting their lives in the line of duty to save COVID-19 patients.
The virus is said to be highly contagious, but “Our health workers have been trained on giving their all to save those who needs care,” Dr. Abayomi had said during one of the interviews.

Abayomi
There is no better time to have a bio security expert and a virologist as the commissioner for health in Lagos State than now when the state has become the major burden of biosecurity challenge caused by the global COVID-19 pandemic.
Abayomi who has spent most of his career years studying the concept of emerging infectious disease, the development of laboratory capacity in Africa, and the geographical variations of disease patterns, is now in a terrain familiar to everything he has read and practiced for several decades.

Until his appointment as the Commissioner for Health in Lagos he was a Professor of Clinical Medicine at the Nigerian Institute of Medical Research (NIMR), Emeritus in the Department of Pathology, Faculty of Medicine and Health Sciences, University of Stellenbosch in Cape Town, and Principal Investigator of the Global Emerging Pathogens Treatment Consortium or GET, which was established at the height of the Ebola Outbreak to address bio-security concerns in Africa

While the road to victory is still long in the fight against the coronavirus pandemic, time will tell if he will be able to bring his experience to bare in the total fight against COVID-19 when history of the outbreak is being written in the state.

NCDC
It is no longer news that one of the ways to defeating disease outbreaks of this magnitude is to timely identify, isolate and treat infected persons; an approach the NCDC has taken in Lagos State and many other states, which ensured most of the confirmed cases were identified on time, evacuated from their homes and taken to the infectious disease centre for onward management by health workers.

This, no doubt has helped many of the patients as their diseases were identified on time while treatment commenced.
With 85 COVID-19 patients still at the isolation centre in Lagos, it is only a matter of time to know if the state will truly win the fight against the scourge with fewer casualties.