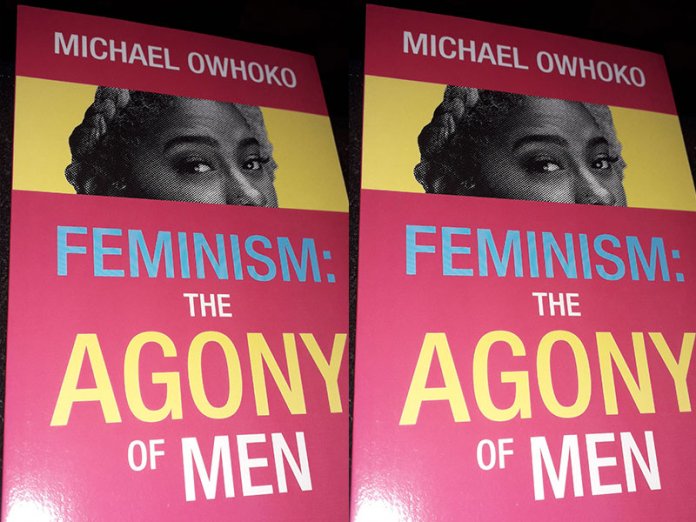 There are some books that leave a sour taste in the mouth. Michael Owhoko’s book titled, “Feminism: The Agony of Men” is just one of those. It all began with the title which to a large extent does not reflect a rounded view of the concept of feminism. Without unnecessarily seeking to raise dust, feminism has been a misunderstood subject for many including some self-acclaimed feminists. The result is that there has been different shades of feminism. But what seems to connect all the shades of feminism is the call for equal opportunities and rights as humans. This view is grossly condemned by the author in this book.

The author argued that it is a divine arrangement to make women not have the same rights as men. Today, there are lots of fundamental rights enshrined in the laws of many countries. And the rights that many women may have taken for granted today which had been fought for by leading women of substance- some of whom had even earned prison terms and bad names for pushing their relevance beyond the kitchen.

Today, girl-child education has improved and many parents are no longer afraid to invest in their female children’s education because they would end up in a lockdown situation once married. There are increasing number of men who support their wives in their careers, unashamed to stand behind the women as they take public offices and steer the difficult wheels in their various organisations.

Owhoko’s tone is bitter throughout the 95-paged book. His argument is that feminism is ruining many marriages. On the contrary, many known feminists are enjoying blissful marriages. Chimamanda Adichie, Michelle Obama and Beyonce Knowles-Carter are very vocal feminists to cite as examples. In addition, there are many male feminists who have joined the women in advocating for equal opportunities based on their experience of how women had been largely undermined by prejudice in their careers.

Throughout the book, Owhoko cited examples of non-exemplary women who have displayed arrogance and infidelity in their marriages. He wrote about how financially independent women are disrespectful of their husband’s headship. The reality is that many women in marriage ventured into it with the hope that their family head will be responsible for the economic well-being of the home. To their shock, they end up being breadwinners and their husbands find it difficult to show support by condescending to do the domestic work such as cooking, washing, laundry while the wife spends long hours at work and in traffic.

The truth is the author has released what can be described as a piece of literary poison for young men who may be venturing into marriage. While it is true that men and women are not equal in marriage, it is important for any writer to emphasise on how love can shatter the barriers to bonding, understanding and mutual respect rather than paint feminists or women generally as potential rivals to a man’s headship in the home.

editor - June 7, 2020 1:44 am
11
How time flies. When Major Abubakar Umar was appointed military governor of Kaduna state by Gen Ibrahim Babangida in 1985, he was just approaching...

Mental Health in the Age of the Pandemic