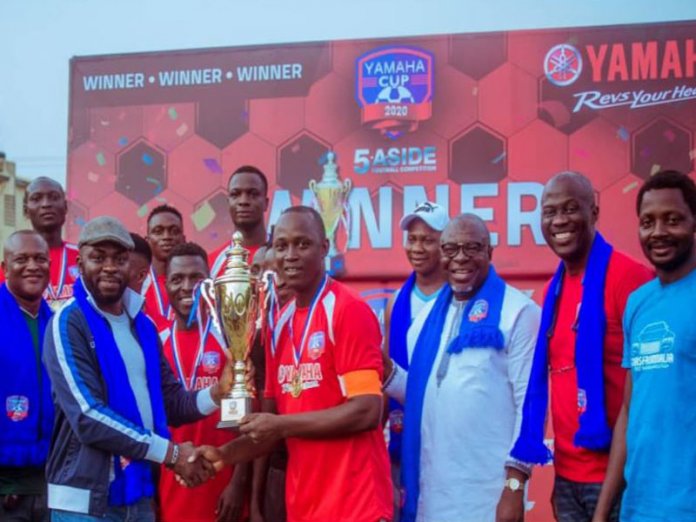 The Mechanics team has emerged champions of the Yamaha Cup in Lagos zone.

They defeated the Marine Boys of Ikorodu 2-0 in a nail-biting final game played at Kith and Kin School Sports Field, Ibeshe recently.

The games, right from first match, were full of intrigues and drama as expected of a football tournament with non-professional players competing against each other. The tournament’s objective was to foster camaraderie, encourage physical fitness and wellness among the players and their larger team.

The Executive Secretary of Igbogbo-Bayeku LCDA, Barrister Ade Ayeni presented the winner’s medal, and the Yamaha Cup to the triumphant Mechanic Team.

Speaking at the event, Ayeni congratulated the winning team and thanked Yamaha for organizing the tournament and choosing Ikorodu as venue for the exciting competition held in a friendly and fun environment.

The Team Lead Marketing of CFAO Yamaha, Mr. Victor Momodu said organising the Yamaha Cup “is our own way of giving back to our customers and promoting unity and togetherness because you need your whole team contributing to win a game of football.

“At CFAO Yamaha, we put our customers first and we are always seeking to rev their heart by giving them all round value, whether in an experiential manner or otherwise.

“We are very happy that the Yamaha Cup 2020 five-a-side tournament has provided complete entertainment to our people; the players, coach, their supporters and the general public. It’s for us mission accomplished,” he concluded.