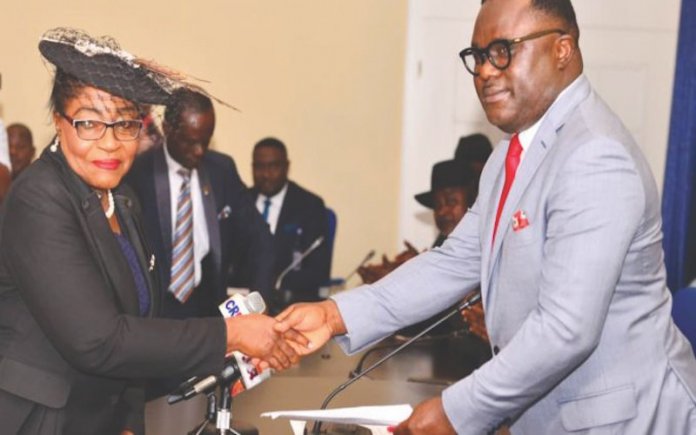 The decision by the Cross River State Government to not appoint Justice Akon Ikpeme as the chief judge of the state based on the flimsy excuse that she was a security risk to the state since she is an indigene of neighbouring Akwa Ibom State, has been widely condemned by those, who believe that no one should be denied a merited appointment on such primordial sentiment.

Condemnable as it is, the scenario playing out in Cross River State is a common occurrence across the states and federal institutions in Nigeria. Not even the nation’s ivory towers are spared of discrimination based on tribal and sometimes, religious sentiments. It is a clash between citizenship and indigenship.

By hiding under indigenship, Nigeria’s best are often denied appointments in critical placements and this is how sensitive posts end up in the hands of mediocre.
If the governor of Cross River State, Ben Ayade and his co-travellers in the House of Assembly were to fly to London, they would not insist on being flown by a pilot from Cross River state, they would rather insist on the best pilot even if he was from Akwa Ibom.

When people are sick, they want the best doctor to treat them, not the one who comes from the same locality with them. But when it is time to appoint the managing director of the Nigerian National Petroleum Corporation, they go back to their backyard to pick their kinsman and not the best manager in the country. This is partly responsible for the nation’s lack of progress.
Yet the constitution in section 42 (1) states: “A citizen of Nigeria of a particular community, ethnic group, place of origin, sex, religion or political opinion shall not, by reason only that he is such a person:

(a) Be subjected either expressly by, or in the practical application of, any law in force in Nigeria or any executive or administrative action of the government, to disabilities or restrictions to which citizens of Nigeria of other communities, ethnic groups, places of origin, sex, religions or political opinions are not made subject; or.”
The above provision is often observed in breach, as there are no immediate sanctions for violators.

Akwa Ibom was created out of Cross River on September 23, 1987, by the military regime of Ibrahim Babangida.
She was recommended to the governor for appointment as chief judge of the state after the council found her worthy in both character and knowledge. She has been screened by the Department of State Security and found not to be a security risk.

Her state of indigene should therefore not be used against her. To do so is to allow ethnicity and politics to decide the appointment of the chief judge of Cross River State. It is inequitable.
This is not saying that the Cross River State House of Assembly does not have the power to reject her nomination, no, far from it but not under the excuse given.

By virtue of section 271(1) of the constitution, “The appointment of a person to the office of a Chief Judge of a State shall be made by the Governor of the state on the recommendation of the National Judicial Council subject to the confirmation of the appointment by the House of Assembly of the State.”
Appointing a chief judge is a balancing act that involves the state governor, the National Judicial Council and the state’s house of assembly.

Although the governor of a state has been vested with the power to appoint the chief judge of his own state, that power is not absolute as the governor has to share the power with the NJC in recommending suitable persons and the state house of assembly in confirming the appointment.
It is obvious that Governor Ayade was behind the disgraceful decision not to appoint Ikpeme as the chief judge of the state. He has merely used the assembly to achieve his aim. This is further confirmed by the statement credited to the Commissioner for Information, Asu Okang, who mounted a strenuous defence for the assembly.

“Are you aware that Justice Akon (Ikpeme) was asked as part of the screening exercise, ‘In case there was an issue between Cross River and Akwa Ibom State, Your Lordship, who would you stand for?’ You know her response? She said, ‘I would stand down on the case and reassign it to someone else.’ A chief judge of the state?” the commissioner said.

Unfortunately, the commissioner only exhibited his ignorance because the judge gave the right answer. That is what the code of conduct for judicial officers expects her to do – to recuse herself if she would not be able to do justice. That is what her oath of office demands of her. But the commissioner expected her to say she would side with Cross River. What a shame!
The NJC will have to rise to the occasion. First, it will have to sanction Justice Maurice Eneji for accepting to serve as the Acting Chief Judge of Cross River State without being recommended by the council.

It had done so in the past. By the precedent established by the NJC, it is fairly settled that a judge needs the permission or approval of the NJC to accept appointment from the executive.
In 2014, the then Rivers State governor and now Minister of Transportation, Rotimi Amaechi appointed Justice Peter Agumagu the chief judge of the state. The NJC preferred Justice Daisy Okocha, who was the most senior high court judge.

For accepting the appointment, the NJC under the leadership of the then Chief Justice of Nigeria, Aloma Mariam Mukhtar accused Justice Agumagu of disrespecting the council by accepting the appointment. He was consequently suspended.
At its 85th meeting held on the 14th of March 2018, NJC recommended the compulsory retirement of Mr. Justice Obisike Oji of Abia State High Court of Justice, to Governor Okezie Ikpeazu of Abia State.

A statement signed by the council’s director of information, Mr Soji Oye stated that: “Hon. Mr Justice Obisike Oji was earlier queried by the council for allowing himself to be sworn in as acting Chief Judge, and thereby colluding in, and aiding an unconstitutional process. His reply was unsatisfactory and the council recommended his compulsory retirement.“

The council did not find anything wrong in Justice Muhammad accepting the appointment as acting Chief Justice of Nigeria from President Muhammadu Buhari following the suspension of Justice Walter Onnoghen.

Even the lame duck Nigerian Bar Association (NBA) said it “is unequivocally opposed to the appointment of Eneji J as the Acting Chief Judge of the State and even more opposed to the unsavory political intrigue within the Executive and Legislative arms of the Cross River State that has so far resulted in the unconstitutional failure of both arms to confirm and swear in Ikpeme J as the substantive Chief Judge of the State.” But beyond the opposition, what can NBA that has lost focus do?

It is important to reiterate that the council, in punishing judges who allow themselves to be used by the executives, appeared to be strengthening the lack of independence of the judiciary. The decision to waive this rule now potentially threatens to erode the gains made in the past.
Will the council be able to sanction Justice Eneji after it failed to sanction Justice Muhammad for allowing himself to be sworn in as acting CJN? Only time will tell.
Pix: Cross River State Governor, Ben Ayade swearing-in Ikpeme as acting Chief Judge of the state.jpg