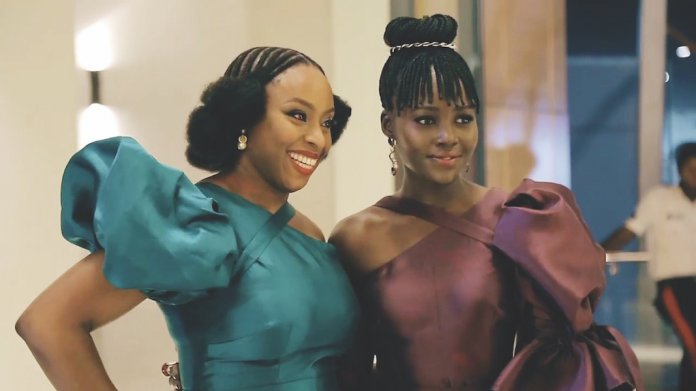 It was a spectacle of who is who in the creative industry on the evening of February 22, 2020 as award winning Nigerian author Chimamanda Ngozie Adichie brought Kenyan-born Hollywood star, Lupita Nyong’o to Lagos to dine with her celebrity friends in Nigeria’s commercial city and entertainment hub. From movie to music to media, they all gathered. The aim was to intimate the Nigerian creative community with her screen-adaptation of ‘Americanah,’ a novel by Adichie.

Nyong’o, famous for her roles in critically-acclaimed movies such as 12 Years a Slave and Black Panther, is coming ahead of the screening of Americanah, a television series adaptation of Adichie’s acclaimed novel of the same title. American subscription video-on-demand streaming service, HBO Max, gave a straight-to-series order for the Americanah project in 2019. Nyong’o’s Black Panther co-star, Danai Gurira, wrote the pilot and will serve as show runner on the 10-episode limited series.

The Kenyan-Mexican actress Lupita Nyong’o stars as the lead character (Ifemelu) while also serving as the executive producer in the ten-episode HBO series which was directed by ‘The Walking Dead’ star, Danai Gurira. ‘Americanah’ tells the story of Ifemelu (Nyong’o), a young, beautiful, self-assured woman raised in Nigeria, who as a teenager falls in love with her classmate Obinze. Living in a military-ruled country, they each depart for the west, with Ifemelu heading for America.

There, she learned that despite her academic success, she is forced to grapple for the first time with what it means to be black. On the other hand, quiet and thoughtful Obinze had hoped to join her, but with post-9/11 America closed to him, he instead plunges into a dangerous undocumented life in London. It has been a passion project for Nyong’o, optioned the rights in 2014 after falling in love with the novel.

According to her, she had read other books by the writer – Half of a Yellow Sun and Purple Hibiscus and “both of them were incredible”. This fueled her anticipation for the next book Americanah, which she pre-ordered long before its release in April 2013. “I remember finishing the book and falling madly in love with Obinze… at this point, he’s like the standard man that I’m still looking for, but I just felt like this is a character that I would love to embody on screen because what I do is act and her characters were just so actable”.

Speaking further, Nyong’o had noted that one of the things she feels privileged to do is to bring specificity to the African story. For her, the vague and generalised representations of Africa is a trend she hopes to see less of and that’s one of the reasons she’s excited to be among the cast of Americanah, as it is expected to be set in Nigeria. “So, I’m here (in Lagos) to immerse myself and learn as much as I can in order to do the story justice,” she added.

The Black Panther actress said she “appreciates the warm welcome” so far in the country, among other things. She was also excited to share some of the Igbo Language and Pidgin she had picked up in the course of her brief stay. “Daalu o” (meaning thank you), she said, expressing her gratitude as the audience cheered her on. An elated Nyong’o had taken to her social media page shortly after the show to celebrate the feat.