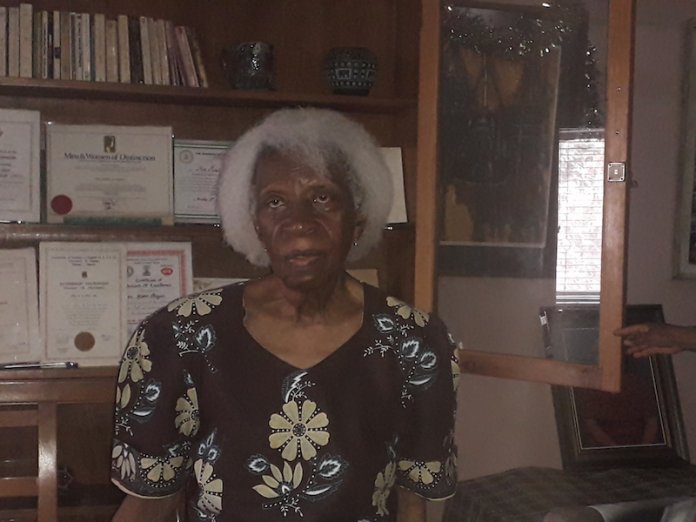 One of the few surviving matriarchs of African literature, poet, playwright, teacher, broadcaster and sportswoman, Mabel Segun was surrounded on her 90th birthday in her home by journalists who were absorbed in her reminiscences laced with humour. Yinka Olatunbosun reports.

“I thought I was going to die,” Mabel Segun began. Her full grey hair, neatly combed, was blowing gently with the wind from a nearby standing-fan. She graciously endured all the camera flashes as she told the journalists about her near-death experience some days earlier when she had diarrhoea. Still recovering, she fussed about her lack of energy till it was agreed that she should change her clothes into one that was more comfortable. “Let me go and wear my bikini,” she said, as some of us swallowed the chuckles.

She returned to the couch again to take more pictures, savouring the selfie moment. “This is not bad,” she remarked, glancing briefly at the group photograph with her at the centre. In her younger years, she was the centre of attraction as one of the few women writers of Nigerian descent that shaped the landscape of African literature with her varied writings spanning short stories, children literature, cookery book, poetry and plays. Born in Ondo State, she graduated from the University of Ibadan in 1953 with a BA in English, Latin and History. Her first book, ‘My Father’s Daughter’ (1965) has been translated in German, Danish, Norwegian and Greek. In 2007, Segun was awarded the NLNG-sponsored Nigeria Prize for Literature.

Her conversation was punctuated by a call from Prof Wole Soyinka whom she teased about old age. “I don’t travel much these days. You shouldn’t stress yourself so much that you will accept all invites. That’s my attitude. I have a lot of unfinished work to do. I like to revise my works to be as near perfect as possible. My cultural cookery book took me 18 years to prepare. Right now, someone is doing her a PhD thesis on my early poetry in UK,” she said.
For her, writing Children’s Literature is one difficult writing experience.

“When you write Children’s Literature, you write for different ages. You have to know children and study their psychology. I can’t write for teenagers. I don’t know them. The reason why Cyprian Ekwensi could write for children was that he could talk to children. Well, my honourable Wole (Soyinka) tell him to go and talk to a child,” she said in good-spirits.

The author also remarked that teachers play a part in the creativity of a child. She recounted how her literature teacher, Ms. Ore Cole had deepened her poetry appreciation with the vivid imagery in “Sea Fever” by John Masefield. “The poetry influenced me so much that I wanted to be a sailor. I requested for a sailor uniform and that was how I became a sailor in the house. I will never forget the teacher,” Segun, who later became the Head of the Department of English and Social Studies and Vice-Principal at the National Technical Teachers’ College, Yaba, said.

Asides the quality of formal education, the poet argued that the lack of basic infrastructure such as good power supply has affected the reading and writing culture.

“We are living in the most unnatural condition. In the olden days, we wrote with oil lamps. But we have gone back to it now. I told my daughter that I wished we had not given away our oil lamps. We had about six of them in the kitchen, taking up space. It’s a pity. Why are we not progressing? Why can’t we have proper electric power supply? The authorities don’t know that this affects the attitude of young people to reading,” she remarked.

She also expressed concern on the spate of self-publishing and how the burden of book production and distribution had been borne by many contemporary authors instead of the publishers.

Largely influenced by her father and popular writer, Isaiah Aigbovbiose Imoukhuede from Sabongira Ora, Edo State, the poet detests paying lip service to feminism. Instead, she demonstrated in her youthful years that women have the ability to do what their male counterparts can with her antecedents in tennis.
As this reporter stared questioningly at a family picture that showed Yeni Anikulapo-Kuti and her daughter, Rolari and grandson, the nonagenarian figured out that some stories were yet to be told.

“Yeni is my late son’s former wife. She turned out to be a very good person,” she said as she recalled how many people tried to pressure her to stop her son, Femi Segun from marrying Fela’s first daughter. Despite the short-lived marriage, Yeni had maintained a close tie with her mother-in-law.
In 2009, Mabel Segun received the Nigerian National Order of Merit Award for lifetime achievements.