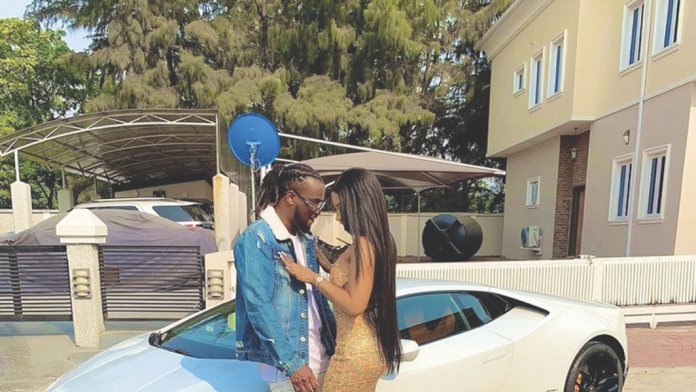 As promised, Rudeboy, Paul Okoye of the defunct music duo P-square finally released the visuals for his new song, ‘Take It’. The video which was released on Tuesday February 11, 2020, features Mercy Eke of the 2019 Big Brother Naija reality TV show and their fans are pretty much excited with the choice of Mercy as the video vixen. Rudeboy took to social media to announce the release of the project. “Out now #takeit link on my bio,” the music superstar wrote.

Rudeboy had earlier taken to his Instagram page to post a teaser of the new music video. In the classy visuals, Rudeboy is seen restating his determination to go any length, including giving up his money, for the sake of love. The less than four-minutes video tows the line of love and exotic living that the song exudes, with Mercy adding that juicy touch to it, flaunting her backsides several times. The music video opens with Rudeboy stepping out of an exotic car as he helps his lady out of the car.

They are greeted by staged paparazzi and fans wanting to take photos of them. They are on a shopping spree as Mercy picks out expensive fashion items like bags, shoes and clothes. Her sultry body is put on display in another scene as she strips down to a two-piece bikini and shares a kiss with Rudeboy. She goes on to dance seductively before taking a dip in the pool.

The video’s takeaway is about the feeling of being in love and the beauty it has when there is finance to the romance as yet another scene sees Rudeboy buying a car for his lover.

In the video, Mercy is treated to a luxurious lifestyle, a bit like her new real life. Doesn’t life indeed imitate art, sometimes? The video release comes just a day after the newly minted celebrity held a house warming party at her new apartment inLekki Lagos.

The party was attended by many celebrities, including former housemates from the Big Brother Naija show. If Rudeboy and Mercy intended to take their fans by surprise with the release of the music video, they certainly succeeded.

The TG Omori directed music video sees the two stars playing the roles of lovebirds. Rudeboy sings about his love interest taking everything he has so long as she doesn’t break his heart. The video – characterised by exotic scenes – also sees the singer and the reality TV star entangled in romantic displays. Over the weekend, photos of the ‘Reality’ singer with the reality TV star went viral on social media with many suspecting a coded affair brewing between even beyond their little business engagement.

While they had both dropped a few hints, they weren’t stated clearly.

At some point Mercy Lambo as she’s fondly called was spotted posing with a new Lamborghini Aventador meant for the video shoot. Announcing his new song, Rudeboy quizzed his fans, ‘Are you sure you are ready to take it?’ Rudeboy had dropped a couple of hit videos last year. In September 2019, he dropped the visuals for ‘Audio Money’, featuring Shatta Bandle, Ghanaian Instagram personality and self-acclaimed billionaire.

His record breaking ‘Reason With Me’ video gathered over 10 million views just a month after release. For Mercy Eke, this isn’t her first video appearance. She appeared in Davido and Ichaba’s “Baby Mama” video before her BBNaija exploit. The first female BBNaija winner also appeared in the music video “Nawo Nawo” by Airboy. She also made appearances in several other music videos like Ije Ego, by MC Galaxy.