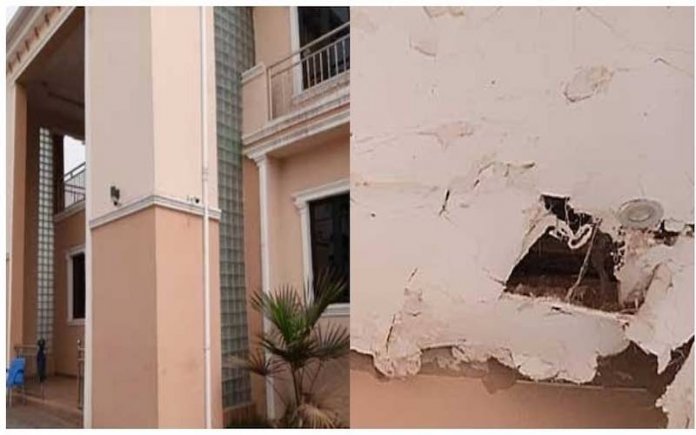 A suspected bomb yesterday exploded at the home of the factional Secretary of the All Progressives Congress (APC) in Edo State, Mr. Lawrence Okah.

The explosion, which was suspected to have emanated from an Improvised Explosive Device (EID) blew off the ceiling and shattered the windows.

Speaking on the incident, Oka alleged that gunmen had last Tuesday fired at his bedroom, and accused the state government of being behind the incident.

“On Tuesday last week, I heard gunshots. They shot at my bedroom. The police came and picked 52 bullets here.

“Yesterday at about 12.30a.m, I heard a noise like boom. I called my security and they said it looked like a bomb. The one they threw at my bedroom did not detonate. If that one has detonate, you would not have seen me to talk to.

“That was targeted at my room. If it had exploded it would have been a different story.”

“By the grace of God we are alive to speak to our people to let them know what is going on. We pray to God for those we help not to turn around against us”.

One of the governorship aspirants, Pastor Ize-Iyamu who was present at Okah’s residence alongside other APC chieftains, said they would arrest the perpetrators if the police failed to arrest them.

He said the perpetrator do not have the capacity to sustain what they are doing because if they push them to the wall, the consequences would

“They went to Chief Inegbeki house and threw bomb there. Who will go and throw a bomb in his own house because they want to do mischief? Chief Inegbeneki offence was that he was coordinating a rally in his hometown in Irrua. Lawrence Okah has been the subject of a lot of attack and attention.

But in his response, Governor Obaseki said the resort to violence was the stock in trade of Ize-Iyamu, National Chairman of APC, and their cohorts in the Edo Peoples Movement (EPM).

Governor Obaseki who spoke through his Special Adviser on Media and Communication Strategy, Mr. Crusoe Osagie, said the state chapter of the APC was peaceful until the EPM and its enablers commenced their nefarious activities across the state.

Edo Police spokesman, DSP Chidi Nwabuzor, could not be reached for comments as at press time.