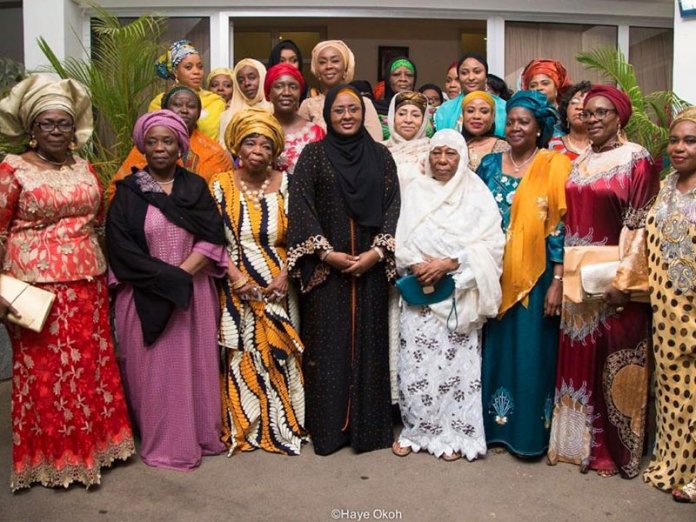 It was a day of reminiscences thursday as seven former first ladies of Nigeria and the current occupant, Mrs. Aisha Buhari, shared experiences at a conference organised in Abuja. The conference was organised by the first daughter of former military President, General Ibrahim Babangida, Hajiya Aisha Babangida, in memory of her late mother, Maryam.

Professor Uche Azikiwe, Mrs. Victoria Aguiyi-Ironsi, Mrs. Victoria Gowon, Mrs. Ajoke Murtala Muhammed, Justice Fati Abubakar, Mrs. Turai Yar’Adua and Mrs. Patience Jonathan joined the incumbent first lady, who was accompanied by Dolapo, wife of Vice President Yemi Osinbajo, to eulogise the late Mrs. Babangida whom they all recognised as the woman who gave the office of the First Lady both visibility and purpose. They also spoke on the role of the first lady.

Most presidents or heads of state, according to Mrs. Muhammed, widow of former Head of State, the late General Murtala Muhammed, are isolated and “only the first lady can feel the pulse and help address the situation. A first lady is that all important third arm, third leg, third eye and third ear of her husband.”

Mrs. Muhammed, who reeled out what can best be described as manuals for the office, said: “Before you step out to do your own thing, you must gauge your husband’s moods and other related emotions. How is he fairing? How is his appetite? Before a big day, you must never distract him; you must help him focus on his assignment of leading his nation well and delivering on his mandate.”
On the temperament of the office, Mrs. Muhammed said: “A first lady must work quietly alongside her husband, helping him in any way she can to make his day bearable. Be ready to celebrate his triumphs quietly with him when things go well and when they do not go well, be ready to take the knocks and be a good comforter.

“She should be seen always and heard sometimes or once in a while but not too loudly. A first lady is the unseen hand, advisor and support to her husband to enable him to succeed. A good first lady understands that she is not in competition with her husband but should complement him and enhance his stewardship.”

Paying tribute to the late Mrs. Babangida, Mrs. Muhammed said the manner she brought up her children is worthy of emulation.
“She raised them to be respectful, quiet and humble,” adding that Aisha has become “a woman who cares about people, a child who cherishes her mother’s legacy and will not allow it to die.”

In her own contribution, Mrs. Gowon, wife of General Yakubu Gowon, said as first lady, she had no office and saw herself basically as “Mrs. Gowon” while recalling the civil war era and the challenges of the period.

“What I planned for was life in the barracks but I never had it. As far as I was concerned, I was getting married to a soldier and as first lady, our living room was my office. I saw myself as a support for whatever he was doing,” she stated.

She said because she was young at the time, she had to depend on the wives of respected officers to teach her “but I was also prepared to learn. Besides, I was just a companion for my husband in a period of war.”

Recalling how she became the first lady, Justice Abubakar, wife of former Head of State, Gen. Abdulsalami Abubakar, said on June 7, 1998, she had travelled to Adesoye College in Offa, Kwara State, to visit her son and returned very tired; so she was not in court the next day.

“I expected my husband to call in the morning as he would normally do but he didn’t until around noon when he called to break the news of General Abacha’s death,” she added.

Mrs. Abubakar said after the expression of grief, her husband told her to come straight to Abuja to commiserate with Mrs. Abacha. “By the time I got to Abuja, they had already left for Kano. And then the appointment came that night. It was difficult to explain my emotions. We were looking forward to my husband’s retirement, not such appointment. I felt what can be described as the fear of the unknown. It was a difficult moment,” she said.

Uche, wife of the defunct First Republic President, Dr. Nnamdi Azikiwe, who eulogised the late Mrs. Babangida as the woman who brought the office of first lady to limelight, said there was gender bias within the Nigerian society.

“If a woman is confident, the society will say ‘she is too forward’. They will blame the husband. Women are seen as partners for social functions. Maryam broke that tradition. She was a first lady who was seen and heard,” said Mrs. Azikiwe who added that children must be brought up to understand the equality of genders.

Asked how she felt when she became first lady, Turai, widow of the late President Umaru Musa Yar’Adua, said she was not excited.
“I had been the first lady in Katsina for eight years and just when I thought I was going to have my husband (to myself), it was like he was taken from me again. I was not excited and there is nothing to be excited about in being a first lady,” she said.

Patience, wife of former President Goodluck Jonathan, who received the highest ovation at the event, paid tributes to Mrs. Yar’Adua and the late Mrs. Babangida whom she described as her mentor.

She also recalled the turbulent period her husband was acting president following the illness of Yar’Adua and Jonathan’s eventual ascension to the presidency.

Victoria, widow of Nigeria’s first military leader, the late Lt. Gen. Johnson Aguiyi-Ironsi, the oldest woman at the event, was the most exciting as she sang and shared jokes that left the audience reeling with laughter.
Babangida’s speech was shownon video before the session started.